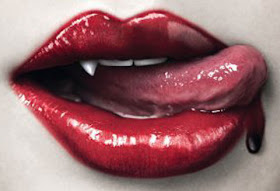 Ok, I love True Blood. No, really. I watch it every week as soon as I can and never regret doing so (well hardly ever).

But I see so much jumping and squeeing about it being the bestest thing ever for all its GBL portrayals and I have to hmmm... because I'm not going there.

Oh, don't get me wrong, it's better than most. Where most programmes rarely have any of us portrayed at all – and if we do we have maybe 1 token, stereotyped insert. True Blood with Lafayette, Jesus, Pam, Tara, Naomi, Nan Flannigan, Russel Edgington, Talbot, Sophie-Ann and even Eddie had a whole stable full of GBL people. It's immense and really really rare outside of niche shows that are meant to distinctly target us.

So, why aren't I leaping for joy and backflipping over True Blood's GBL representations? Because quantity does not equal quality. Just having a GBL character – or having a gazillion GBL characters – doesn't make a show a wonderful font of equality. The quality of those portrayals matter – the stereotypes, the tropes upheld also matter. And there's such a lot problems with the portrayals that many of them annoy me, frustrate me and generally do not get shiny gold stars.

Lafayette redefines awesome in many ways. Only Pam has better lines than Lafayette. He is many kinds of awesome. He's also a drug dealing prostitute, uh-huh. He has been the victim, frequently, traumatised considerably and the GBF more than a little. He had no love interest until season 3 and that's with Jesus. Jesus & Lafayette have mastered the art of kissing in low light and going to bed wearing so many clothes that there are people living in unheated homes in Alaska who would say “hey, don't you guys want to take something off?” I'm not one who demands gratuitous sex scenes – but in a series where we have seen Sookie, Bill, Eric and Sam all nekked and humping – as well as several woman on woman scenes with a lot of nudity – it's glaring that when 2 men get it on it's in very low light, wearing hazmat suits and quickly fading to black. But when a man and woman get it on? Chains, humping, all but full-frontal nudity, moans, gasps, jiggling breasts and pumping buttocks.

We have had 3 dream-squences where straight men have woken in horror and fear after being in something close to man/man action (Jason/Eddie, Jason/Hoyt, Sam/Bill). These 3 short dream-sequences mean that these 3 have actually had more action than Lafayette has in 4 seasons.

Jesus: When Jesus appeared I was extremely happy to see Lafayette after so long being chaste or a prostitute, was finally getting a love interest. And we had sweet courting and it looked like it was going to grow into a real relationship... and it never did. In season 4 they've supposed to have been together a day and not only is everything sanitised as said above, but there's clear daylight between them at all times. And now they don't even seem to have a relationship – all it is is Jesus continually talking the reluctant Lafayette into things he doesn't want to do and Lafayette being dragged along into more and more trouble by it. Lafayette's relationship is becoming a source of hardship and difficulty for him and Jesus is acting more interested in Lafayette's power rather than him as a person. I don't think we've seen any real affection between them this season.

Talbot. Oh Talbot. This 700 year old vampire SQUEALS around violence. Actually squeals. He whines epicly about the interior decorating and despite his vast age is treated as a petulent child who constantly needs petting and soothing. And as a bonus? He dies – he dies during gay sex, the closest thing we've had to an explicit gay male sex scene in the series – and Talbot dies. And the motive for his death is that Russel loves him – he is dead entirely because he loved another man.

Tara only recently found love with another woman. Not only is their relationship based on a whole shedload of deceit but we see very much her turning to another woman after being raped and abused by Franklin. The trope of GBL people – especially women – turning to same-sex relationships after a bad/abusive relationship with a member of the opposite sex is a tiresome and painful one and one that feeds into the whole “you just haven't met the right {opposite sex person}” idea. As an added bonus she takes up cage fighting when she turns to other women. Does she get a free set of power tools and dungarees as well?

Naomi: We've seen her about 3 times and most of that has been naked sex with Tara – which means we've seen more explicit sex from Tara & Naomi's 4 episode old relationship than we have in all of Lafayette's from Season 1.

Nan Flannigan: pretty much a non-character. She's in a position of strength and power, but I wonder if her being a lesbian is supposed to be part of how “aggressive” she is – especially given Tara's “I love women now I take up cage fighting” shift. She's a very peripheral character

Pam: I love Pam, I really do. But she's a peripheral character who is there to serve someone else, be snarky and provide comic relief. Not much of a character to fail but nor to be a source of anything other than brilliant one liners.

Sophie-Ann: Again, peripheral character – but we did get get to see her failing mightily. Harris gets a whole lot wrong – oh yes yes she does, ask me about Teagarden sometime – but Sophie-Ann of the books genuinely and deeply loved Hadley and she was a capable, competent and powerful character. In the series she was incompetent, laughable, ridiculous, farcical – and dead. The only one who could possibly make Musty – I mean Bill – seem like a better king.

Eddie: gay vampire. While I was pleased to see a gay man portrayed who wasn't sexy and hot – it became a source of desperation and tragedy for him. He used Lafayette as a prostitute who in turn used him (and his desperate need for affection). This in turn left him vulnerable to being kidnapped, tortured and killed by Jason and Amy. Again we have a gay man's affections making him vulnerable and dragging him into badness.


This is not all good here. I love that there are so many characters – it's almost unheard of in mainstream television. But these portrayals have severe problems and no matter how much I love the show, no matter how much I love the number of GBL characters in it and no matter how awesome they can be (yes, Russel was the best villain ever, and Lafayette's “AIDS burger” scene will forever go down as crowning moments of pure awesome and Pam never opens her mouth without awesome coming out of it) no matter how wonderful these things are, we cannot – should not – blinker ourselves from the very real and very major fails going on here. I love the show, I love the diversity but I am not going to sign off all these problematic elements as ok – I refuse to endorse that. They're not ok and the fact there's a lot of shit out there doesn't make these ok. And it's not ok to say they are ok, to ignore them or gloss past them – because we do deserve better, yes yes we do.
Sparky at 3:00 PM
Share