Review: Play of Passion by Nalini Singh, Book 9 of the Psy/Changeling series 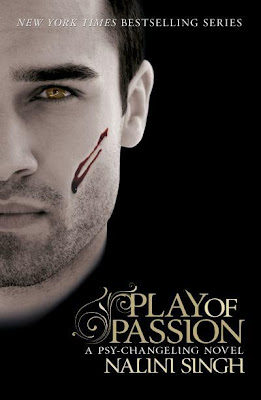 Indigo is a lieutenant with the Snowdancers pack and one of the few dominant female soldiers. Third in the pack, she has few equals and even less superiors and this causes her a problem – because she and her wolf do not want a subordinate male to be a partner.

Enter Andrew, tracker for the pack. With his dominant wolf and indeterminate rank, he may fit Indigo well, if it weren't for that grey area left by the unknown rank and the looming worry about whether their excellent working relationship would be compromised by a failed romantic encounter.

They battle their mutual attraction as well as continued problems from both being dominant wolves, negotiating each others dominance, rank and control.

The Psy are on the verge of civil war, the Council fractured between those who are desperate to preserve – and expand Silence and those who see it falling as inevitable. The latter faction is now closely linked with the Snowdancer and Darkriver Changeling packs and both stand to be dragged into the war by their Psy members and simply to protect their territory and San Francisco. Already, the pro-Silence Psy are moving in force against the Changelings as the war begins.

I have to say, I was deeply disappointed with this book, though that's not entirely fair of me. This is difficult. Because part of my unhappiness with this book is genre related – therefore highly subjective, even more than most reviewing – rather than quality related.

I want to see this and eagerly reach for each book, happy to catch the glimpses of this most excellent story and world that could very easily be among my favourite in the genre.

And it is glimpses, because centre stage is another couple working their way to forming the beast with 2 backs. Ok, to be fair, it's not porny sex scene sex scene sex scene like some writers (Laurell K Hamilton, Anya Bast? That would be you), but the romance is very very very much front and centre and all this wonderful, amazing plot, this astonishing world, this truly excellent story? I have to see by looking over the lovers' shoulders. And, to be fair, though I dislike this it is a genre difference. Nalini Singh writes Paranormal Romance – and with a name like “Play of Passion” the book doesn't exactly hide what it is. I don't like the Romance genre – that's not an insult to the genre, it's simply not to my taste and I generally find it rather dull. And to me this was worse than most of her books because the Romance was even more dominant than usual – the actual world and meta-plot took up only about, 10-20% of the book, while Indigo and Andrew's relationship dominated the rest. It's a change of focus from the previous books and probably because this is the first time we've seen a relationship between 2 members of the same group (so we don't see the usual cross-group politics). And while it was nice to have a glimpse of some of Snowdancer's inner workings, ultimately the book came under “another love story” for me, regrettably.

So a lot of my reaction to this book is disappointment – but disappointment simply because I generally don't like this genre. I won't condemn it for that, though I will say it wasn't for me, especially since I'd hope for so much more after reading the rest of the series.


I also think there are some other criticisms to make. It most certainly isn't an original love story, even from other books in the series – nor free from the tropes that continually arise. Even though both lovers are Changeling, we have the same tropes we saw with many of the Changeling/Psy relationships. We have a reluctant woman who is firm – vehement even – with her “no” and the man continually pushing and pressing because he knows what she wants really. Previously this was explained by the woo-woo with the Psy since they were emotionless and needed freeing from Silence, now the only woo-woo excuse we have is that he's a dominant Changeling and its his nature. While I know it's something of a staple trope, I'm not comfortable with the idea that a woman's reluctance is just something you need to wear down. We have another problem in that this is now the second time when a dominant female Changeling has been the heroine and in both cases they have agonised because they cannot cannot cannot have a man who is weaker or less dominant than they are. The male Changelings never seem to have this problem.

The series remains entirely straight and cis. It has a cast of dozens, perhaps even hundreds now and there's not even a token inclusion

It is diverse racially, however. One of the interesting features of this series is that mixed race people are very much the usual – the Psy coldly choose their partners to mix their genetics, the Changelings and humans we've seen are largely of mixed parentage and heritage. Not all, but a substantial number. However there is little sense of differing culture since being changeling or Psy is the culture presented and we don't focus enough on the humans to see any difference there.

I hesitate to recommend this book. The world is great but we don't see enough of it here. If you like Paranormal Romance, you'll probably like it.