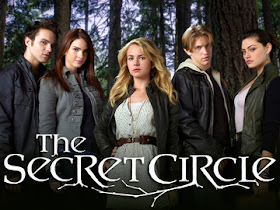 Well we open to see that Melissa (Doormat) and Nick (Hot Guy) seem to be having a much healthier relationship. I bet it can't last – more angst is needed. Meanwhile, Cassie is looking up Heather Barnes (her mother's old school friend) after Zachary mentioned she wasn't dead and that Cassie's mother did far worse than that to her. Cassie is looking her up because... because... actually I don't have a clue, maybe she's chronically bored or needs to top up her angst levels or something. Anyway she's googling. She does her best to find her, but her cyberstalking skills are sadly lacking as she tries to trace where she lives, what family she has and their contact details (she turns up a brother). Not perturbed, she goes to school and enlists the aid of Diana (Chief Scooby) to go on a happy stalking field trip! Yay!

But alas, Diana can't go but she nominates Adam (Adam may not make decisions, Chief Scooby decides!) so we can have more puppy dog eyes between Adam and Cassie. And here I side-eye. After last episode Diana admitted she thought there was something going on between Adam and Cassie, it's obvious they're both into each other and fine, she trusts them – but then decides to all but set them up? Really? Go take some Mean Girl lessons from Faye!

Adam and Cassie go on their stalkerdate and they find Wade Barnes – who *gasp* knew Cassie's mother (I love that shocked look on Cassie's face. “OMG your sister was my mother's best friend – and you knew my mother?! I never would have guessed!”). Wade tries to play creepy guy (comes off more like stoned guy) and reveals that Heather is right there and they can't see her – of course being Scoobies they insist (of course they have a right to go into this stranger's home to speak to another complete stranger!) Heather, however is catatonic – and has been for 16 years, ever since the fire that killed the Scooby parents – until Cassie gets too close and Heather GRABS HER ARM (the capitals are necessary here. Seriously the whole room acts like Heather is an alligator dragging her underwater, they panic this much). They notice she has a mark on her wrist and then leave.

Adam says the mark is a sigil – a magical symbol – and Cassie instantly decides it's what makes Heather catatonic and that it was all her mother's fault (not quite sure why, but she has decided, probably because it refills her angst levels more). Anyway, the stalkerdate decamps to Cassie's bedroom (for some reason, probably because of lack of sufficient sexual tension) and Cassie shows Adam her etchings – and her family's Book of Shadows (each family has one, but so far only Diana, Chief Scooby, has found hers). Adam is excited and Cassie decides to sit very close to him so they can look up the sigil. They find it – and how to counteract it.

They go to the Scooby House to make their curing poultice (oh gods, did he really have to describe a “poultice” as a “magic potion”? Really? That's even worse than “Harry Potter and the Sorcerer's Stone”). They make the poultice with much meaningful touching and eye contact until Diana comes in in yet another Awkward Moment. Chief Scooby sees that Cassie also has a book and seems most disappointed that someone has a book to challenge her Chief Scoobiness. She orders Adam not to help (well just assumes Adam will obey) until they know more (not that I disagree with her but I do doubt her motives).

Despite being pretty nice to Melissa last episode, Mean Girl Faye puts her spikes in this episode – though Melissa seems to have grown a full spine! Shame she only really seems to have it in relation to Nick. Hot guy cures doormatitis it seems. But Faye keeps on trying. On some levels I can kind of see Faye trying to protect Melissa here because she does suspect Nick, but she has been such a complete Mean Girl that it's hard to see her as being kindly motivated (and Melissa has the same difficulty). Either way Melissa has doubts put in her mind by Faye and breaks up with Nick. Teen romance and drama... yay. Then later Melissa apologises for overreacting and listening to Faye... ugh ugh ugh how much do I not care about this? We're treated to a later oh-so-saccharine scene as they get oh so lovey-dovey

Mean Girl moves on to Cassie and sees she has a book! And of course places manipulative friend (honestly does anyone believe this friend pitch) – ready to help Cassie with the spell so long as she gets to see the book – so off they go to sneak back to Heather and it goes oh-so-predictably wrong. Y'know, every single programme/book/film about magic has to have the inevitable “inexperienced witch casts spell wrong/without knowing consequences” scene. I think Charmed had 9 of them.

Chief Scooby checks her book and looo yes we daemonic possession. Dark magic has put daemon inside Heather and the spells were suppressing it. This is my surprised face. And Heather shows up at Cassie's house – looking for Cassie's mother and clearly emotionally distressed and confused. Cassie instantly commences with the grilling. Oh dear, Cassie done made a mistake, collect 10 Spunky Agency Points.

Possesed Heather knocks Cassie out and chases Faye with a poker (is this possession or has she just met Faye before?) In the tradition of horror film damsels everywhere, Faye decides to run upstairs rather than out the front door, she misses the opportunity to hide in the shower with dramatic music, but runs to the window where she is spotted by Melissa and Nick who run to the rescue. I kind of hoped for a big magic show down (maybe a little more impressive than the one against Zachary) but instead she runs – out in front of a car and is killed in the accident – but the little demon snake thing sneaks out of her body and creeps into Nick's coat... and it eventually ends up in Melissa's ear. Dum dum dum.

(And can we have a note here on how HUGE Cassie's grandmother's house is. Especially since she's a nurse, let alone affording to buy it, affording to heat that thing must be a pain in the wallet)

And just before the end Adam comes back to Cassie's house alone without Diana knowing – probably to check out more of her etchings.


I wish I could say it was anything other than predictable but, no. Not too many fails this time round though beyond Cassie not having the brains of a concussed cabbage, but pretty dull. I felt like we had a lot of screen time and not a whole lot happening or learned or moved forwards. the love tangles became more tangled and lo, we learned about demons. And too many of the characters are hollow - Diana and Adam in particular are hollow and lack any personality, Faye is a walking stereotype and Nick and Melissa are, frankly, just unnecessary. I literally don't like any of the characters

Diversity wise it's still lacking though I'm still torn as to whether Melissa is a WOC or not.