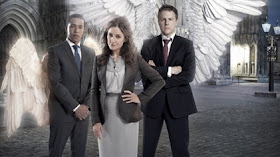 This week we have a complicated case.
Mack is an old man living in a care home – that is being sold. And as it is sold, the elderly residents will be moved to other care homes – whether they like it or not. Mack takes exception to this and puts his medicine in Keith, the manager’s food – and punches a policeman.
It seems a simple case of ABH, but the prosecution, leader by the fallen angel Richard seeks a charge of attempted murder. A sentence that would naturally kill an 82 year old. But then there’s the question of whether the law fails to apply simply because the perpetrator is old?
Joe a friend of Mack, another resident of the home with advanced Alzheimers and to control Mack, Keith threatens to separate Mack from Joe if he doesn’t do what Keith wants – and this is what prompts the poisoning
But even that is not simple – as Joe is very much in thrall of Mack as well in his easily exploited state. Especially since it’s clear that Mack wasn’t a great friend of Joe’s once – and once ran off with his wife. Of course, then we have a new twist and Mrs. Sherringham sees his friendship with Joe in his vulnerable state as a kind of penance for what he did.
And if that weren’t enough, Keith clearly has his own demons with an overbearing and cruel father and how Mack was involved with his father’s bullying cruelty.
The ending… was a trifle twee. Guy overcomes decades of issues to have a sudden and miraculous change of heart? I suppose a show about angels is allowed a certain twee level but still, it felt clumsily cobbled together at the end.
And, of course, Richard the Fallen Angel holds shares in the companies trying to buy the care home. I’m not sure how necessary this was. The Fallen Angel is evil and doing evil things fits well enough, being a demon and all. Throwing in him being corrupt for the sake of money feels… unnecessary? Convoluted perhaps. More like it has been inserted to try to add to Hannah choosing between Zak and Richard angst plot than any real story or character reasons.
Meanwhile, Zak is having a shaky crisis of faith in Mr. Mountjoy – what he did to Mrs. Sherringham and whether Mr. Mountjoy still cares as well as wondering the implication of the doomsday clock and how close humanity is to the edge – add in his issues with Hannah and we have ongoing angst.
I’m beginning to think moping angst is the only thing that will count as meta in this series. Mrs. Sherringham and Tom are both floating in angst - and rising -  and Zak is positively drowning in it
And then we have Tom and Jude forming their own little angsty mortal/angel relationship
This episode covers some very heavy issues – especially with aging, the treatment of the elderly and how helpless they are to affect so much of their lives. It also touches on the fear of aging – as Mrs. Sherringham faces the reality of aging after her life as an angel.
It has been 3 episodes and Tom remains problematic. He’s still a side-kick, he’s inherently lesser than Zak due to his lesser experience – and the seeming contempt for him as a chorister. And he continues to be childlike, ignorant and needing of guidance and direction in a way that is extremely infantilising. It’s a shame, because the concept of the character is not a bad one in itself, nor is the interaction between them not amusing – but it fits too neatly into an extremely unpleasant racial dynamic. He’s a fun character and an interesting one – but him being so lesser, so child-like, so in need of constant instruction and control is deeply troubling.