This week we were going to use a Face Off to decide who is the Mustiest Vampire of them all. You know, the vampire who is so sad and tortured by his need to drink blood, who just wants to be human and normal and fluffy and find the love of a good woman to settle him down. But, alas, it never works out, his nature/the world/the convoluted plot line/the super specialness of their love interest just forever prevents them from knowing peace - reducing them to practicing their most tortured look in front of the mirror.

Sadly, we couldn’t reduce our options to just 2 - there are a lot of these Musty Vampires crying blood tears into their kleenex out there. With much effort we reduced it to 4, but Aidan from Being Human certainly deserves and honourable mention. 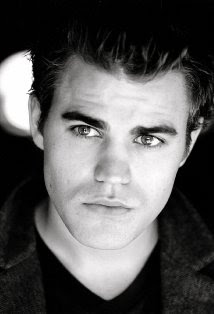 Mystic Falls’ original musty vampire, Stefan Salvatore refuses to drink blood from living humans as drinking human blood will quickly send him over the edge to become a murdering ripper. Of course, his primary source of angst is his love for darling Elena who... well, loves him unreservedly but still manages to be a source of constant angst (I think he may also be a little guilty about the enormous number of people he has brutally murdered... but I think his beloved Elena matters more). Unfortunately, since Elena is the Most Special Doppleganger, it’s near impossible that their love would ever run smooth - It doesn’t help that he keeps poking angry ancient vampires to give himself more reason for angst and why he and Elena need to be apart (woe).
Perhaps most remarkably of any of the Musty Vampires, Stefan Salvatore’s mustiness is actually contagious. Yes, he is infecting Damon with his mustiness! He is slowly turning from the sexy villain in season 1, to the ever more Stefany-clone of Season 3. 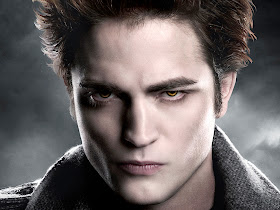 Edward and his family are different from all other vampires because they live off the blood of animals and have declared themselves to be vegetarians. Even though he has chosen to make this sacrifice he is convinced that his soul is damned to hell and that there is something evil about him. This of course leads him to remind Bella of how evil he is constantly, even as he tries to control every facet of his behaviour.

When Bella tries to initiate sex, Edward is forced to stop lest sexual congress without a wedding ring, damn Bella to hell alongside him.  When he first reveals himself to Bella he takes great care to point out that she cannot out run him, that he is stronger than her, and that even his scent is appealing to others.  Everything about him he has determined to be evil, though without becoming a vampire, he would have died 100 years ago. 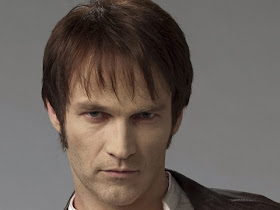 Bill Compton is cursed to be the man who loves Sookie Stackhouse, along with just about every other man in Bon Temps for reasons unknown. In classic Musty fashion, Bill wants to mainstream and be normal. Synthetic blood and none of that naughty killing. His primary source of angst doesn’t seem to struggle to maintain his humanity unlike many Musties, but then, since his love interest of Sookie who, is quite capable of causing her own dramas and is much sought after for her special shiny blood. That gives him more than enough reason to angst - and if not for that, his maker, vampire politics and his lost human family give him more than enough reasons to keep the tears flowing. If being involved with Sookie weren’t enough reasons.

Bill looses some points in that he finally seems to be de-mustying himself with his new role as King (and certainly he has a better wardrobe), but it’s all in the name of greater Mustiness. But, to be fair, it’s hard to look non-musty next to Eric. But we know that should Sookie crook her little finger, he would come scurrying back faster than you could say Sook-eh. 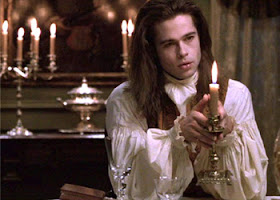 Louis as far as I am concerned is the original musty vampire.  He makes his first appearance in Interview With the Vampire by Anne Rice.  He is in a true depression at the loss of his wife and in child birth, and decides that he wants to lose everything, and that includes his life. It is Lestat who answers his challenge by turning him into a vampire.  Somewhere along the line, I am sure that Lestat secretly wished that he could go back in time and change his decision.

As soon as Louis finds out that he needs human blood to survive, he blames Lestat for turning him into a monster.  Even when Lestat tells him to feed off of the blood of the evil doer, Louis is not the least bit mollified. Thus begins Louis' eternal life as a self hating vampire.

Armand says that Louis morose nature reflects the spirit of the age; he reflects it’s broken heart.  To this, Louis responds that all he has left is his suffering, which leads me to believe that the man truly loves his misery. He cannot read the minds of humans and he is the weakest vampire in Anne Rice’s world.  Though Louis sees himself as Lestat’s moral compass -- in truth -- he is a self involved musty vampire, who lives to be miserable.


So, readers - who is Mustiest of the All?