The Becoming by Jeanne C. Stein: Book 1 of the Anna Strong Series 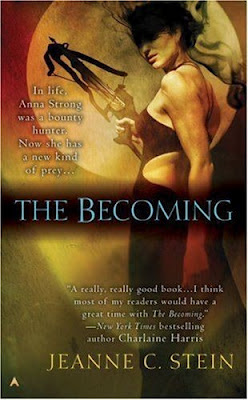 The Becoming as actually a good book, and has a strong female protagonist. Anna Strong is a private investigator and she and her partner David are trying to Donaldson a man who jumped bail in San Diego. They track him to a bar and think that they will have no problem him hauling him back to jail in time to appear in court the next day.  Unfortunately for them, Donaldson is not the human they expected.  He very quickly knocks David unconscious and then rapes Anna in the back of her car.

Anna awakes days later to discover that she has been raped.  David argues with Avery, Anna's doctor about her being released but in the end he consents and she returns home.  Once home she realizes that she is hungry and attempts to eat some lasagna but the smell immediately nauseates her and she is forced to throw.  Suddenly, out of the blue, Avery shows up at her door and informs her that she is a vampire and wants to know if she has any questions.  At first Anna is disbelieving until she notices that she can read his thoughts, her reflection starts to disappear in the mirror, and her body is healing at a rapid rate.

Life for Anna as a new vampire is not easy. Though she is granted immortality, a mystery quickly develops where her house is burned down, her best friend is kidnapped, and there is an attempt on her life.  Anna is desperate to find and save David even as Avery, her vampire mentor encourages her to forget about him an move on because David is mortal.  Anna is tempted because Avery quickly becomes her safe space, protector, and her love but she cannot let go of her ties to David.


Though The Becoming is just over 200 pages, the story is well rounded and extremely fast paced.  In the Anna Strong series, vampires are able to walk in the sun because they have evolved, though they still need to drink blood from humans in order to survive.  They are able to communicate telepathically however this communication can be interrupted by things like White noise and radio waves.  Vampires also fear vampire hunters who believe that they are a threat to humans and when it comes to certain vampires, they are absolutely right.

As I mentioned at the beginning of this review, this story takes place in San Diego.  Judging from the people that were included in this story, Stein clearly sees this area as an all White area.  There is no justification for the absolute exclusion of people of colour.  At the beginning of the story we are told about Anna's best friend Micheal.  To calm David down when she wants to go home after being raped, she tells him that she will call Michael her best friend.  We learn that she believes that this is a good choice because not only is Michael gay, he was gay bashed so badly that she had to nurse him back to health, and therefore he has an intimate understanding of what it is to be a victim. If that were not bad enough, we don't actually meet Michael, essentially making him a gay Maris. To use something as series as gay bashing as a distraction belies the seriousness and the hate behind the assault.   I wonder if Stein thought that using a gay character in this way got her inclusion points?

Finally, in perhaps was the most distressing part of the story, was the shifting of what was clearly an act of rape into consensual sex using woo woo.  When Donaldson attacks Anna, it is absolutely clear that she does not consent to the sex act.  When she begins to pass out, he wakes her saying that he wants her to stay awake because it's more fun.  It's traumatic enough to have a read a scene like this only to have the character later experience none of the emotions of a rape survivor and remember that in the end, she participated joyfully because she got a taste of vampire blood. It is not unheard of for women to orgasm during rape, but even in the event of this, without consent it is still rape.  Stein's treatment of the story actively excused what Donaldson and cast rape as something that is not harmful by not having Anna experience any negative emotions afterwards.

The GLBT fail and the erasure of people of colour did not add anything to the story.  We have seen this time and time again in urban fantasy and it does become more tolerable over time.  As much as I love the fact that Anna is strong, capable, logical and smart, it's not enough to make up for the problematic elements in the story.  I hope that in the next book in this series, Stein attempts to make her story more inclusive and takes issues of rape more seriously.  If you are going to use gender based violence are marginalized people, you cannot treat their lives lightly.