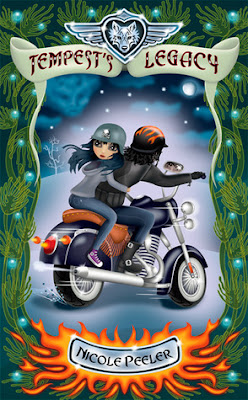 Back in Rockabill, Jane True continues to work on her training with Nell and hanging out at the local watering hole with her friends.  Things are still awkward with Ryu the baobhan sith, now that she knows that a relationship between them is just not something that she wants.  Jane's feelings for Anyan Barghest. Each day Jane becomes more confidant in her skills, which is good thing because she is going to need all of her power to bring justice the man who killed her mother and kidnapped Iris.
Jane wants to fully participate in the investigation but Anyan and Ryu have other ideas until she uses her magic to slam them repeatedly the ground.  Things have changed and Jane now not only has the ability to defend herself, but the ability to go on the offensive.
Traveling to the Borderlands, Jane learns about the warehouses set up to experiment on purebloods and halflings.  As she listens to the stories of the survivors she is even more determined that this must come to an end. No matter his position in the court, Jarl cannot continue to experiment on women in this fashion.
Tempest Legacy, is the third book in the Jane True series and just like many books in the genre, it seems that Peeler has finally seen fit to make her world a touch more diverse.  In this book, for the first time ever we meet people of colour.  Though I am happy to finally see some people of colour, Peeler feel into what we like call the blackety black trap in her description of Capitola.

She was long and lean with a catwalk model's body. Her face was carved from jet-black ebony; an artiste's rendering of the perfect female.  She was a queen, a Nefertiti, and I knew the barghest must be in love with her. [page 60]

In case you didn't get the message, Capitola is Black.  We get to meet Capitola's family who are also African-American.  They are side characters and after having an absence of 2 books without people of colour, it would have been nicer, had they been stronger characters and had much more to do with the story than they did. I will however say that beyond the description which I found to be a touch excessive, that her characters of colour did not fulfill any of the typical tropes that have become common in urban fantasy. I am however very curious why it took the change of location to Chicago, to finally add in some characters of colour to the story? I am further not pleased that they are segregated from the rest of the cast, though the reason given was not their race but their status as halfings.


We also got the addition of a new GLBT character. We first met Julian in Tracking the Tempest.  He is a valued member of Ryu's team and functions basically at their IT guy.  He is also serves the purpose of acting like a battery to recharge energy when the supes overdo it.  I was not pleased to have Julian as a gay character because of his ability to function as a batter because it essentially makes him into a built in servant.  This was redeemed by Julian's choice to go and live in the Borderlands though. This decision was based upon the fact that he felt that no matter how good he is at his job, that people would always seem him as a hafling and therefore less than. This gave Julian quite a bit of agency and helped remove him as strictly a servile character.

Despite the fact that Jane is more sure of herself and her powers she is still prone to have breakdowns.  While each incident in which this happens she is under extreme personal distress, it is disturbing that Anyan has to be the one to rescue her in each of these situations.  Jane can physically rescue and protect herself, but when it comes to emotions, she is still highly dependent upon Anyan.

Jane is also still prone to spunky agency.  She wants revenge for all that has happened and instead of thinking it through and coming with a clear plan, she decides to take off in the middle of the night. In her line of thinking she has no choice because she believes that the others on the team won't make an actual move against Jarl. It takes the intervention of Julian for her to realize the ridiculousness of her actions.  Once again, Jane needs to be saved from herself.

There is quite a bit of appropriation going on in Tempest's Legacy.  As I mentioned earlier, both haflings and full bloods are being kidnapped, raped, murdered and experimented on.


Each of the women had told a similar story of horror, and the healers who attended them had been able to fill in blanks that they were as yet incapable of revealing.  Besides rapes and beatings, each of the women had endured different series of bizarre, Dr. Mengele-type experiments. [page 152]

and there was also:

One minute everything was all manicured lawns, lovely ornamental trim, and clean white wood.  The next minute we were in some medical lab from Auschwitz. [page 199]

I understand that Peeler was trying to convey the horrible circumstances but deciding that it was okay to compare these experiments to those performed by Mengele and deciding to invoke Auschwitz crossed the line.  What Mengele did and what happened at Auschwitz were horrible real life events and should never be used as a plot point. These victims were experimented on, raped, abused and murder. It was extremely clear that happened was horrible and there was absolutely no need to invoke the holocaust.

Despite the appropriation and the faults, I continue to love the Jane True Series.  I find myself rooting for Jane and excited each time more of her power are revealed.  I love that she knows herself well enough not to settle for the first man that comes along, and to choose one that really understand what she needs and who she is.  Jane is not willing to settle, and that is a rare thing in urban fantasy.  Peeler's world continue to grow and each time the reader becomes used to the supernatural elements, a new one is added.  Jane True is an ever evolving series and full of win.