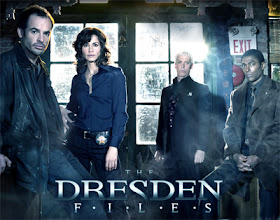 We begin with a gunfight where 2 glamorous women manage to drive off 3 masked attackers with machine guns – though they lose their bodyguard in the process. One of the women, Bianca, runs on to interrupt Harry’s date (and his date is less than amused by the secrets Harry’s keeping, it seems).

Harry doesn’t want to work for Bianca – especially since she is a vampire. Unfortunately he owes her after she helped him long ago when he was injured – she not only took him in but hid him while Morgan was looking for him in the wake of his uncle’s murder by black magic. She even listens to him angst and complain.

But he really doesn’t trust her and Bob most certainly doesn’t.

She is under attack and Bianca’s worry is that the attack is sanctioned by the High Council who, as we learned last episode, police supernatural activity. The vampires have treaties with the High Council but she doesn’t know if they have been broken. She wants him to approach the High Council and see if it is them behind it.

He needs proof of who did it – and they have the eye from their dead bodyguard allowing Dresden to get an eye-witness testimony with a spell. And it’s Clive – a hitman for the High Council (well based on the fact the attackers wore ski masks and body armour. No, really, the fact they disguised their identity identified them apparently). Next step is to see Morgan, the head of the Wardens of the High Council who says the hit wasn’t sanctioned and they’re at peace with the red court. And he’s upset because Harry interrupted his pudding

Asking too many questions ends up with Harry kidnapped by Clive – who is angry because he says he didn’t try to kill Bianca (if he did she’d be dead, damn it!). Unfortunately Clive is awfully acted  - really melodramatically acted. But we’re spared more bad acting by another gang mercifully putting them all out of our misery with automatic weapons (though Harry’s shoved out of the action so we don’t see anything – boooo, poor special effects budget!)

Harry, in his brilliant decision making skills, then goes to confront the vampires about Clive’s murder.  He decides to believe their protestations of innocence, goes home for more Bob snarking and a visit from the High Council’s Top Dog, Ancient Mai (Asian Dragon Lady stereotype) who is not amused and looking for Bianca – they believe she is involved in Third Eye (a drug for the Undead and presumably its distribution).

Another consult with Bianca (because consulting with the enemy is a great idea) who claims she is being set up – and Harry starts trying to put the pieces together (he gets a pained look on his face when he’s thinking) and after some magic they identify Clive’s killer as a Black Court vampire. Time to interview Arvin – the Black Court vampire. And Bianca has interesting interview techniques but he knows very little and is nearly out of his mind with the Third Eye.

And Bianca knows who is setting her up – Darius, her ex-business partner and ex-boyfriend who she parted with because he wanted to sell Third Eye. Except this is another half baked idea that doesn’t exactly pan out – and Dresden is shot – by Natalie, Bianca’s sidekick. Thankfully because that conversation was going nowhere – it’s about time the bad guy revealed herself because there was no way Dresden was going to find her.

Inclusionwise – the women are seductive. And yet again Harry has a romantic/quasi romantic relationship with the damsel in distress – it’s becoming a patten. We have some highly stereotyped POC (Morgan in a servant role, Darius as a drug dealer and Ancient Mai, dragon lady) and that’s about it.

This is another one of those episodes where I have to desperately forget the books, because part of me is screaming “vampire, courts! Where’s the white court?” “That’s not Ancient Mai!” There are also little cameos in the show (like Morgan referencing the “third eye” drug) which both amuse me but also make it hard for me to draw a line between the two.

Harry wasn’t the best episode in terms of Harry’s decision making. I mean he went to Morgan and Morgan said there was a treaty – why didn’t he give Morgan his findings and tell him the treaty’s at risk? Or at least ask for Clive’s contact number rather than walking the streets? And then to turn and barge in on the vampires? No planning, no thinking and precious little magic – just bouncing from event to event.

I do like the flashes into Harry and Bianca’s past – their relationship, Harry when he was at his lowest and the bond they shared. I think it’s a great way to show the past they have and it helps explain why harry has so much loyalty and trust for her. Given the circumstances he has no reason to trust her and he needs this background to make his character not look completely foolish. It was very elegantly done

As far as mysteries go, it was a bit lacking – there was simply no way to follow the path to the actual perpetrator – mainly because Harry doesn’t really try, he just bounces around reacting to people. No-one plans or thinks things through – they just leap into each new situation without looking. Like confronting Darius – it’s him! Let us accuse him! “You did it!” “No I didn’t.” “Yes you did!” wow, with plans like this how could they not find the bad guy. I think Natalie tipped her hand in the end out of sheer embarrassment.

There were nice elements about this programme and more of the world displayed – and of course, it’s an amazing world. But the story itself didn’t hang together very well, yet again. It wasn’t character driven and for too long they just seemed to be flailing without purpose.