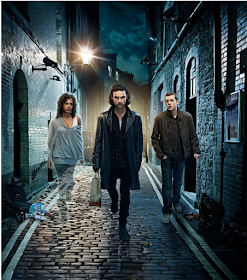 The episode begins with George and Nina searching for Tom in the hopes of finding answers.  Both Nina and George are concerned that the baby will not survive the change. Tom is excited when he sees them in the woods but McNair tells him to hide and not come out.  When George and Nina question McNair, he claims not to know anything.  This denial keeps up until George hears Tom inside the truck.

Back at the house, Mitchell and Annie are trying to figure out how to have an intimate relationship. It does not help that Annie keeps asking Mitchell every few seconds how he feels and even suggests that his pants are too tight when she cannot get a rise out of him.  As an aside, I have to say that I wouldn't have minded have a little snuggle with Aidan Turner myself, that man is a thousand different kinds of yummy. Mitchell if finally forced into asking Annie if it's okay for them to just cuddle.

When Nina and George return, Annie is sitting on Mitchell's lap.  They pretend to be practicing ventriloquism rather than and admit to Nina and George that they are actually a couple.  Nina and George are just as secretive when asked about what they are doing.  An awkward silence descends and they end up going their four separate ways.

Later that night,Tom breaks into the house.  Mitchell realizes that a werewolf is on the premises and goes on the attack.  Annie desperately screams for George and Annie, as Mitchell and Tom fight.  McNair comes into the house but before he can attack, Annie wards him off, as Nina and George separate Tom and Mitchell.  Mitchell wants to know why Tom and McNair are in the house and George says that he is sought them out because Nina is pregnant.  Annie immediately begins to squeal happily and Mitchell congratulates George on becoming a father.

McNair wants to leave and tells Tom to stand up but Nina says that he needs to go the hospital.  McNair says no because they are werewolves and so Nina says that she is a nurse and that the would needs to be cleaned.  Nina and Tom go upstairs, where Tom tells her about how werewolves killed his mother.  It seems that they were trying to run away from vampires but she wasn't fast enough.

Downstairs, McNair is making it clear that he does not trust Mitchell.  He makes it clear that if anything happens to Tom that he will hurt Mitchell.  McNair tells Mitchell that he knows all about the cage matches that vampires hold to set werewolf up against werewolf but  Mitchell tells him that these fights are a thing of the past.

McNair goes upstairs to see Tom and announces that he and Tom will stay until this is all cleared up.  Nina says that they need to go to the hospital in the morning for X-Rays to ensure that she got all of the glass out of the wound.  In the morning they head off to the hospital.  When Tom takes off his shirt, Nina notices that he has the same scars that she and George have.  She tells George that she believes that Tom was turned and that he wasn't born a werewolf.

Back at the house, McNair is talking to Annie telling her that it is a shame that she is dating a vampire.  Apparently Annie is a good girl who can do better.  Annie informs him about her luck with men.  Before they can continue, Mitchell walks in and is not happy that McNair is still there. Once again McNair is aggressive with him.  When he goes upstairs to the attack he sees a sign on a child's toy reminding him of his impending death by werewolf. Mitchell leaves the house and goes straight to see Richard.  He tells Richard that he has some werewolves for their dog fight.

That evening, Annie and Mitchell end up at a club.  Back at home Nina and George are in bed discussing why Mitchell and Annie won't admit to being a couple.  George is shocked at the idea at the thought that they wouldn't approve but Nina says that they don't approve. Because of Mitchell's past, she does not believe that he is a good choice for Annie, but George counters that it is not a good idea to judge others on their past.

When Annie and Mitchell comeback, George sees them in the hallway causing them to admit that they are indeed an item. George is thrilled and says that they are all one normal happy family, until a woman comes out of the bathroom.  Annie, Mitchell and the woman they picked up at the bar go upstairs where the woman and Mitchell start to make out. Annie tries to touch the woman to see if she can feel, what she is feeling.  After just a few minutes of kissing, Mitchell's fangs descend, but before he can complete his attack, Annie pulls him off.  He orders the woman out of the house and she calls him a freak.

The next morning, McNair and George are talking about children and George says that he would like a boy. McNair says that boys start off easier but as they age they become a problem.  Apparently that time of the month makes them hard to control.  I really liked this analogy because it is often used to talk about women.  This makes George nervous and he seeks Nina out to find that Tommy has taken off his shirt and is in the process of professing his love for Nina.  George says that he doesn't love Nina to which Tommy replies that maybe they both love her. Nina cuts the conversation short and tells Tommy that the truth about his history.  It seems that Tommy was not born a werewolf and that McNair actually abducted him and changed him.  Tommy's parents are both still alive.  Tommy charges out of the room and confronts McNair who admits that he turned him but he was just a baby and didn't know what else to do.  Tommy says that he is done and takes off back to the truck.

Back at the truck, George, Nina and Tom are surrounded by vampires.  They are placed into a cage to fight against each other.  George begs them and even admits that Nina is pregnant but they don't listen.  Tommy tells them to kill him and that he won't fight back.  He takes off his shirt to prepare but then realizes that McNair is there.  Mitchell, Annie and McNair fight off the vampires, with Mitchell coming to the rescue of McNair when he is cornered by Richard.  Mitchell tries to escape when he realizes that the werewolves are all starting to turn.

Annie leads Mitchell back to the cage and they hide in there as the werewolves crash up against it.  The next morning, Annie hands out tea and says that George stalked in front of Nina to be protective and that McNair and Tommy stayed on the other side of the room where they wrestled.  McNair tells Tommy to take the truck and find his parents but Tommy says that the truck still needs work and reminds McNair that he promised to teach him how to drive.  The werewolves get up to leave but Mitchell stops McNair at the door to ask if they are even now.  McNair tells him that one good act cannot undo everything that he has done.  McNair says that they are even but someday someone will get him as he turns his hand into the shape of a gun and puts it to Mitchell's temple.

At the hospital we see Herrick in a straightjacket being pushed in a wheelchair.  It seems that George didn't kill him after all and I can just imagine what kind of new horror this is going to bring for the roommates.

I really liked the development of Mitchell and Annie's relationship in this episode. I do however think that things are going to get worse because he has not told her about what happened in purgatory.  The fact that they brought back Tommy and McNair leads me to believe that they will potentially have a larger role to play in this series.  I like Tommy's naive innocence but McNair does get on my nerves.  His comment about Mitchell swearing in front of lady strikes me as quite sexist rather than a mark of him being a gentleman.