Game of Thrones Season 2, Episode 6: The Old Gods and the New 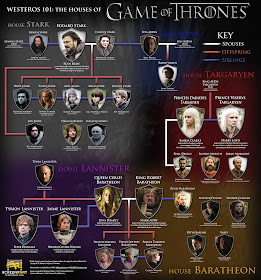 We begin with Bran’s dream about the Sea coming to Winterfel coming true. Theon Greyjoy lead his forces to attack one of the Stark’s bannermen and while their forces were away, they then invaded Winterfel. Theon then spends a lot of time almost begging everyone to acknowledge him as the Lord of Winterfel – it’s a well presented scene as, even with his forces all around and the keep controlled by his men, he is still blustering for control. Osha offers obedience to Theon to fight for him (and, unnecessarily, makes it clear this is Bran’s dream coming true). He throws that he was a hostage in their faces – especially the extremely defiant Ser Roderick, but they know they raised him and treated him better than a hostage needed to be and no-one respects his defence. As the defiance escalates, Theon is forced to execute Ser Roderick – again it’s really well acted with Theon driven to do things he doesn’t like and knows are wrong to try and prove himself to his men – and Roderick dies with incredible dignity.

I have to praise again the acting in this entire scene, from Theon’s conflict to Roderick’s dignity to the people’s grief – it’s very well done.

Osha continues to try and ingratiate herself with Theon. Which involves her getting naked, of course, and exchanging sex for her freedom. While Theon is asleep she sneaks out, seduces and kills another guard (shame she didn’t kill Theon) and flees the castle with Bran. Hordor, Rickon and their dire wolves.

Arya is still in Lord Tywin’s camp and we get to see Tywin’s harsh but extremely intelligent and perfectionist leadership style. It’s hard not to respect him even as he is one of the villains. Then Lord Baelish arrives – Baelish who knows what Arya looks like. Baelish and Tywin discuss the death of Renly, the undeclared nature of the Tyrells (the house with the third largest army in the Seven Kingdoms, Loras and Maegery’s house). Baelish proposes recruiting the Tyrells to the Lannisters for the sake of revenge against Stannis. All the while Arya tries to hide who she is from Baelish.

Later Arya and Tywin have some conversational back and forth which, again, is really well done. He questions her reading and family. We also learn that Jaime appears to have been dyslexic. She also manages to steal a note from the table – though I think it may have been planted by Tywin. She is caught with the note and has to run to Jaqen to name another man to die – and he does, just as the man opens the door to see Lord Tywin.

In Kings Landing Myrcella is being sent to Dorne according to Tyrion’s plans – and Cersei is not happy and makes that viciously clear. Joffrey is, of course, as vile as ever, expressing disgust for his little brother crying at his sister’s leaving. Sansa tries to interject some humanity but, of course, Joffrey doesn’t have any. And he has to go back to the palace surrounded by hostile – and hungry – commoners. Tyrion sees the riot before it happens – but it flares when someone throws a cow pat at Joffrey and he demands the crowd be executed. Oh why can’t someone kill him already.

Joffrey rants and screams – but Tyrion is equally hacked off with him and sets him down with some excellent lines and points out that they only threw a cow pie at him – and that because they’re starving because of his war. I don’t approve of slapping children but it’s hard not to approve of slapping Joffrey. In fact I’m going to rewind and rewatch it. It’s almost therapeutic. And again. Tyrion is also the only one who worries about Sansa who has been separated from them during the riot – though at least part of that concern is that they’ll never get Jaime back without Sansa.

Sansa has been captured and dragged down by a gang of men intent on raping her – until she is saved by Sandor Clegane, the Hound who left Joffrey’s side to find her during the riot. Two people who care about Sansa at least. While Sansa wasn’t stripped nude, another woman has her breasts randomly bared during the riot.

Sansa and Shae are treating Sansa’s cut later – and their relationship has clearly developed a lot, with Shae both telling her hard truths (“your horse eats better than his children”) and cautioning her about trusting people.

At Robb’s army we see how well liked Robb is (contrasts well with Joffrey) and he homes in on the healer Talisa who argued with him after the last battle.  Pleasant chit-chat follows and an introduction to Catelyn the Spunky who laments with Robb that he can’t follow his heart sicne he is already promised in marriage. It is then that news from Winterfell’s fall reaches them. After much dramatic declarations, Roose Bolton advises them not to stop the war against the Lannisters – Theon only has a skeleton army. He can send word to the Dreadfort to his illegitimate son to raise a small force and take Winterfell back

Up in the North, beyond the Wall, Jon the pouty is scouting with legendary ranger Qhorin to try and assassinate Manx Raider, leader of the Wildlings who has gathered a huge army. Qhorin spends his time educating the naïve and rather arrogant Jon Snow about how little he knows of the lands beyond the Wall and what the Nights Watch means. It’s basically some decent exposition – but at least it’s done well and reasonably (and without naked women cavorting around in another sexposition scene)

They find a wildling camp and ambush it – killing the men and capturing the woman (largely because Jon Snow won’t stab a woman even if she is trying to plant an axe in his head). She gives them no information and since they can’t capture her, can’t feed her and can’t let her go without her warning Manx, Qhorin decides to kill her – he offers to but leaves Jon to do it when he says he can. Of course, he can’t and misses his execution stroke allowing Ygrit to escape. He recaptures her but ends up rather a long way away from his fellow Night Watch. Yes, Jon the Pouty has screwed up again. They then go a wandering together to try and find his brothers.

Across the Sea, Daenery and Xaro are waiting for an audience with the Spice King, the second wealthiest man in Qarth. Of course Daenerys is angry at being made to wait (because her entitlement knows no limits) while Xaro reminds her that if she’d marry him (the richest man in Qarth) she wouldn’t need to wait. The Spice King is the man who denied her access to Qarth in the first place. He tries to make polite, welcoming small talk, but she gets right down to her demands. She wants ships to “retake” the Iron Throne (though, as he points out, she never had it so how can she retake it?)

This scene just made me itch. She is extremely arrogant and he is extremely patronising and demeaning. His constant calling her “little princess” needed shouting down and I’m glad it was. His treatment of her was grossly paternal. And her actions were beyond entitled, demanding ships on a promise and pointing out how very very special she is to deserve them.

Later she complains to Xaro that the Coffee King, Silk King and the Spice King none of them want to give her the ships she feels completely entitled to. Xaro advises her that she’s too high minded to get what she wants (which seems to be a rebuttal of her refusal to prostitute herself). Upon returning to Xaro’s home, they find the servants have been slaughtered – and her dragons have been taken.

As in the books and the film – I find the whole Theon storyline just too much in a story that already has kings a plenty, Daenerys, the White Walkers – there are too many storylines and some of them could have done to be culled. This first in line.

Every time I see the Nights Watch among the snowy lands they inhabit, I can’t help but think that while black may be nice and dramatic, white would probably have been more practical.

Daenerys has gone from a meek little mouse, to a strong woman, to an entitled, arrogant woman. Even aside from the incessant white saviour “civilising” nonsense she’s rapidly becoming highly unlikeable. Why does anyone in Qarth owe her anything?

After an episode without nakedness, we had to return tio the female nudity, of course.  But it was less than in the past - maybe it's a new habit? we can hope
Sparky at 9:00 AM
Share
‹
›
Home
View web version