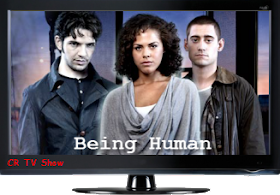 This episode begins with a flashback to six months ago. Adam the teenage vampire meets a young school girl and is stopped before he can feed on her by an older woman.

In present day, Hal is at home singing in the kitchen as he is doing dishes, when Adam shows up at the door with Yvonne, who immediately suggests that Tom put on clothes because "this isn't the jungle book".  When Annie shakes hands with her, she realizes that Yvonne can see her. When Yvonne and Adam learn that Mitchell, George and Nina are dead, Yvonne offers to leave but Adam says that he is fine to stay.  Tom re-enters the room and introduces himself, shaking Yvonne's hand and something clearly passes between them.

It seems that Adam and Yvonne are on the run.  When Adam starts to carry on about their relationship, she threatens him with the naughty step.  Is she is girlfriend or his parent? Yvonne says that she gets a lot of attention from men, to the point of having to call police at the last parents meeting at the school where she worked. Yvonne claims to know what Adam is (referencing his supposed youth), but believes that age is only a number, though the papers have run with the gossip.  When Tom looks outside he sees that the paparazzi have already arrived. Apparently the story of a headmistress running of with a young man is too salacious not to be covered.

When Yvonne puts her coat back on to leave, Hal and Annie beg them not to go out because photos of Adam will prove that his image cannot be captured. The forcefulness of their demands leads Yvonne to ask what is going on. They sit her down and Adam admits to actually being 47 and that Annie is a ghost, Hal a vampire and Tom a werewolf. Yvonne suggests that Adam is just saying this because he wants to end the relationship.. She believes that Adam is troubled and is suffering from a delusion, but  claims that this does not change how she feels about him.

Tom leaves to take a nap but as he leaves the room, he keeps turning around to see Yvonne. In bed, Tom dreams about Yvonne entering his room as a judge and then taking off her clothes.

Upstairs, Hal is with the baby when Adam approaches him about being an old one.  Adam has not changed and talks about unleashing the beast in his trousers but makes sure to warn Hal off Yvonne. Hal makes it clear that he has no interest in her. When Adam leaves, Tom arrives asking if Hal thinks that Yvonne would like some flowers in her room. He says, "she's a guest and needs looking after."  Hal is instantly confused.

Though Adam promised not to leave the house, Adam of course did not listen.  A paparazzi takes a picture of him lighting a smoke and of course the image is invisible.  Tom starts following Yvonne around, though it is clearly making her uncomfortable.  She wants to leave, but Adam says that if Tom persists that he will just knee him in the sensitive area.

A paparazzi knocks on the window saying, "Hey Yvonne, answer me this, why do weird things happen when I try to take a photo of your boyfriend?" This causes Hal to ask if Adam has been outside, which Adam denies. After a stern look from Hal, Adam admits that he was, though he still denies that he was smoking. They send Tom out to confront the paparazzi, who says he believes that Adam isn't as innocent as everyone thinks.

Instead of focusing on the issue at hand, Tom suggests that Yvonne should break up with Adam for smoking.  In a panic, Annie suggests that Hal go after the paparazzi, but Hal is uncertain of what he is supposed to do.  Hal is not impressed with being treated like he s a henchman. In the meantime, Adam is telling Tom that he needs to back off Yvonne. When Yvonne touches Hal and apologises, something clearly passes between them.

Pete, the paparazzi who took pictures of Tom, shows up at Culter's to ask questions about Tom.  He tells him that there is no information for Tom, until he was arrested for kicking someone on tape, who was apparently invisible.  Pete further goes on to say that he has tons of evidence of people being attacked by invisible beings and objects floating in thin air, police files and post mortem reports. He suggests that someone is covering this all up.  Cutler admits that Tom McNair was kicking the crap out of a vampire and that the ones Pete needs to be scared of, are actually the werewolves.  Cutler suggests that the public needs to hear that vampires are fine but that werewolves are the real threat and that they should pool their resources.

Back at the house, Hal is in bed when Yvonne appears to him.  She tells him that the burn he has been worrying about is a sign of his greatness.  She tells him to enjoy the lust and to feed on her.  Tom appears to wake up in a cold sweat. In the hallway, Hal asks Annie if there is something weird about Yvonne. Downstairs, both Tom and Adam rush to get Yvonne's tea. A fight quickly breaks out between the men over Yvonne and ends with Hal stabbing Tom with a stake - killing him.  When Adam realises that he is no challenge for Hal he leaves the room.  Yvonne suggests that Hal should kill the baby and drain it dry because that is his destiny.

Annie bursts into Hal's room causing him to wake this time for real. He tells Annie that Yvonne is a succubus. When Annie confronts Yvonne, she denies who she is and claims that she just had rotten luck. Apparently, Hal is so scared that he has locked himself in his room.  Yvonne says that all the men who pursue her don't actually like her and that they are just under a silly spell.  Adam is the first person that Yvonne has genuinely loved.  Yvonne asks Annie if she will take Adam out of the house to find out for sure the way that Adam really feels.

Annie grabs Adam who is resistant to leaving Yvonne alone with Tom, but she manages to swaddle him in her sweater and sneak him by the paparazzi. They are barely away from the house when Yvonne's spell on Adam wears off.  Adam says that he is into blondes with low self esteem and a huge rack. He realizes that the past six months he had not thought about blood at all, and believes he was free of the vampire curse.

Back at the house Annie tells Yvonne that Adam left and she starts to cry.  Yvonne says that Adam was lucky because he got out just in time, before she leaves the house.   Yvonne walks out and tells the paparazzi that she stole a boys innocence because she is a monster and because she could. As she rushes into the house, Pete asks if she knows what Adam is yet.

Annie pops into Hals room and tells him that Pete is becoming a problem and is a danger to the house.  Back at his hotel, Cutler is waiting for Pete. Cutler looks through all of the pictures of empty rooms and announces that he has no real proof.  Pete says that when he was 12, his mother got a new boyfriend who fed on her.  Cutler encourages him to keep looking and Pete asks why Cutler could not enter his room until he was invited.  Yeah, cause it made so much sense for him to taunt Cutler when he is alone in a room with him. Pete has a crucifix painted on the door and he says that his journalist friends are coming to take note of Cutler. Pete says that Cutler can kill him and drain him but he won't be able to get out.

In the house, Yvonne's eyes have gone all red and spooky as she is approaching Tom's room. Adam is busy stalking a blonde woman and he follows her into a bar, when he sees an image of Yvonne on the television.  He leaves the blonde behind.

At the hotel, Hal and Annie show up to find Pete dead. Annie tells Hal to avert his eyes because of the cross, but it seems that crosses don't effect Hal in the least.

In the house, Yvonne sets about seducing Tom. She tells Tom that she is going to kill him because she has to. Adam comes in the house and interrupts them before she can kill Tom.  Adam then runs out of the house and closes the door.  He says that he wants to talk to Yvonne without being under her influence.  Adam says that they are both trapped by being something they don't want to be and that they should be trapped together.  Adam admits that he loves her and when he tries to come in, she attempts to stop him until he says, "it doesn't matter how many thousands of miles we're apart, I'll still be under your spell."

The next morning Yvonne and Adam leave (hopefully this character will stay gone this time) Annie and Hal have a chat and she admits that she brought Hal to Pete's room because she had an urge to kill him.  Hal is pleased that he didn't drink Pete's blood and realises that he is stronger than he thought.  I don't know about you, but I thought I sense a little bit of romantic chemistry between Hal and Annie.

Cutler releases the video of Tom and George changing into werewolves on the internet in Pete's name.  Clearly, this is going to bring them some trouble in the near future.