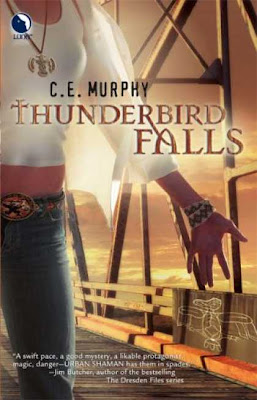 Joanne Walker, or Siobhan Walking Stick and reluctant shaman, returns to face her powers that she can’t keep running from. After the vast events of Urban Shaman, she is intimidated by the power and the responsibility that comes with it – but she can’t deny the damage she did in saving the city last time, nor can she deny her urge to heal. After months of neglect, she’s finally acknowledges she needs to learn more, she needs to explore her powers and she needs to use them – to heal, to help and to fix what has been broken.

Thankfully, she finds a teacher who is willing to pull her stubbornly through the nature of her powers, allow her to explore them further and develop them to their potential regardless of Joanne’s reluctance; though Joanne still has a lot of trouble accepting – her power and her teacher.

And she can hardly focus on her power alone. Her friend, Gary, is in the hospital after a heart attack, giving her more impetus to learn to heal. There’s a mysterious murder in her gym which, her boss is thrilled to learn, has a supernatural element; and she is approached by a local witch coven who are uniting their powers to try and help fix the damage to the city and summon an ancient shaman from the spirit world

But the witches may be in over their heads, things are moving too fast for Joanne to keep up and she’s not sure who to trust or what to do as more and more demands are put on her, not all of which she is comfortable with. But is this reasonable or her own reluctance to accept the supernatural getting in the way?

Storywise I had a little bit of a genre-savvy moment that almost detracted a fair bit from the book for me. I basically pegged the villain long before the villain was supposed to be obvious. As I saw Joanne become ever more involved in the villain’s plans it was frustrating to me because the villainous intent was pretty obvious to me.

I can’t say it was unrealistic storywise, though. Joanne, because of her interactions with Coyote, had reason to trust the people she did. I think she threw herself too quickly and too deeply into the plans of the coven, but even then she did some basic fact checking before. There was no reason for Joanne to not do what she did, her every action was reasonable, even if mistaken, and it didn’t require foolishness or spunkiness for her to do what she did. Though, it did require a little naivety. I’m torn because I’m not sure how much of my objection is based on, as I say, genre-savviness and pattern recognition because internally, within the book, there is no real reason to be suspicious.

Other than that, the story is excellently well paced, perhaps a little rushed, again there’s the sense that Joanne has 100 things to do and not enough time to do it in – I wonder sometimes when she finds the time to sleep (she hardly does). But the number of plot lines going on sometimes feel like when Joanne takes some time to do something important, like visit Gary or look after Melinda’s kids, there’s a sense that she doesn’t have time for it. I think the author did an excellent job of conveying a sense of urgency – but the sense of urgency was so emphasised that it felt like Joanne should be running everywhere – and if she weren’t, what was she doing?

It is exciting and action packed however, with lots of events, some major intertwining plots and themes, lots to juggle that keeps you reading, running to catch up – there just may, just may, be a little bit too much. I think the most glaring to me was her concern and almost flashbacks to her first love, her pregnancy and loss of her daughter as well as her relationship with her first best friend; very poignant and powerful moments yet not entirely relevant to the plot at hand. They were good for character building, but we had a lot of other character building, a lot of great plots to get on with and it just crammed a little bit more in there when it’s already pretty full.

As with the first book in the series, Urban Shaman, sometimes the vivid and wonderful description as well as the surreal settings combine to make the story a little disjointed. It’s a wonderful description of some amazing scenes or magic or feelings or the spirit world – but when we’ve finished going through this very lengthly and evocative description, I’m often left confused – forgetting where we were before the description started, why we even had the description or what’s even going on (this was particularly the case when trying to speak to the dead woman’s soul).

Despite the often derailing nature of these extremely long descriptions, they are evocative, they are powerful and do carry a lot of extremely potent imagery.  I can get lost in them very easily – and in a good way, you can see what is being described and imagine it clearly and vividly. They’re well done – but perhaps just a little overdone and there needs to be more of a thread of reality and pacing to balance the vivid description.

There is a lot of research in this book, or so it seems (I can’t say for sure not being an expert on Native American traditions myself). There’s a sense that the author has made an effort to do a lot of work getting the information, themes and legends together rather than relying on wiki as so many do. The history, the spirits, the spirit world and her shamanism are all have a lot of depth and realism to them.

Inclusionwise, Joanne is half-Native American who is finally coming into her culture and knowledge a little more. She’s still largely ignorant and avoidant of her heritage as she was in Urban Shaman but she is making enough steps in the opposite direction to suggest this won’t be a continuing theme. The very awesome Melinda is a Latina woman and one who is both connected to her culture without being stereotypical, I hope we’ll see a lot more of her and I suspect we will. We have some other background POC, though not in a major way. Unfortunately we don’t have any GBLT people.

One of the things that really makes this book is the character interactions. Joanne and Gary, even though he played a much more minor role in this book, really bounce off each other well. They have excellent banter, a lot of fun and a lot of wisdom between them. While Gary was away for so much of this book, we did have Billy who, again, bounces off Joanne extremely well, expanding the world, building characters and often being just very funny and very human. Perhaps best of all is her awkward interaction with her boss, along with it’s very heavy thread of mutual respect and growing sexual tension. It’s nice to see it build and develop so that the relationship when it happens (and oh yes it is) will have much stronger foundation to it. Until then, it’s fun and very real to observe.

This book is an excellent continuation of the first. It’s fun, it’s well researched, it’s informed, the protagonist is much more solid, it’s fast paced and action filled and crammed with story. My only real criticism is that it may be just a trifle full, a little overflowing and between number of plot elements and vivid description, a little overwhelming.