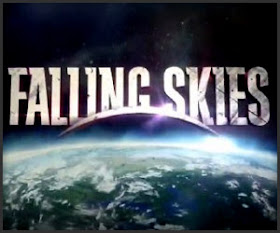 The 2nd Massachusetts is doing its big push to Charleston where the remains of the human government are supposed to be hiding (waiting for an air strike – yes I’m cynical) and Tom is worrying and sad about Ben deciding to leave and try and join the Skitter rebels. He also has to reassure Matt who has made a Will because he’s worried about not making it. Pope is still being a nuisance with Maggie and Hal (may Pope die soon) but Maggie doesn’t think Hal is “dark” enough to murder Pope, alas. Maggie and Hal are flirting, Ann and Tom are flirting. Weaver and Tector are not flirting, but Weaver does point out that he knows Tector was military – but the questioning ends when they hit a Harnessed kid on the road.

Having had such great experiences with harnessed people before, they decide to put the kid in the Doctor Bus and take her with them. This is something that couldn’t possibly backfire in anyway. Weaver begins to see sense but the harnessed child wakes up and starts being pathetic so his heart melts. It’s ok, it’s not like harnessed people can be manipulative of people’s emotions, right Karen? Oh. I’m with Anthony on this one. In further ill-advised actions, Matt starts bonding with the girl, Jenny, which totally worked out with Ben and Karen… oh wait again.

She talks about how much she loved her “Guardian” (what she calls the Skitters) and how much they were a family. And Matt tells her that Charleston’s awesome – right in there with super-secret knowledge there Matt. Why are they leaving a kid unattended with the dangerous alien servant? In between Mat begging her to join them in Charleston, something hits the side of the bus – something Jenny says is her brother, Tyler. The next time he visits, she uses her harness strength to break out and run for it.

Hal, Maggie and Pope are having engine trouble, which is a problem given that they’re the forward scouts (in a truck?) plotting a safe path and have to stop to top up the water. With Hal off to fetch water, Pope questions what will happen when Hal learns Maggie’s DEEP DARK SECRET! To which my response is “is she an alien? No? Her secret’s not relevant – welcome to dystopian world priorities!” but Maggie seems quite perturbed. Pope urges her to tell the truth in between urging her to join him on whatever adventure he’s planning.

Maggie and Hal have a deep conversation about what she’s hiding – apparently she took drugs, stole things, went to prison and had a baby she gave up for adoption. I’m kind of waiting here for the big bad dark past that is supposed to completely change how Hal feels about her. Is that it? Apparently it’s big for Hal and he needs time to absorb everything.

We have some emotional scenes where Weaver digs out exactly why Tector left the military and is trying to avoid being part of the military parts of the 2nd Massachusetts, and we see more of Lourdes dealing with her grief over Jamil, it’s nice to see he wasn’t just brushed over.

Ann comforts Tom who is dealing with his disappointment and emotional breakdown over Charleston – Hal missing. Ben out playing with the Aliens and his 9 year old Matt making a will. And Tector turns the tables and gives Weaver a pep talk so he can get out there and encourage the 2nd Massachusetts to pick themselves up and keep going.

And then Colonel Porter arrives – who was the big boss of all the Massachusetts divisions. And it turns out that there is a settlement in Charleston – but it’s very well hidden. And then Hal and Maggie catch up as well – for a wonderful little reunion.

Who is Tector? I mean we kind of breezed through a season and several episodes without seeing him then he had a bit role in the Berserkers and then they’re suddenly treating him almost like a side character. We’re even getting, now, some insight into his background – is he another side character like Lourdes or Maggie or Pope, if so what does he add to the story? Or is he another bit support like Dai or Anthony or Jamil – in which case, why the background?

I had to laugh at Tom worrying about what they’ll do with all the thousands, if not millions of harnessed kids who, even free of the harness, are still affected when the humans drive the aliens off the planet. Talk about borrowing trouble; since there’s no indication that the aliens are going to be driven off.

I am bemused that Maggie’s revelations are that shocking or, in a post-apocalyptic world, really that relevant. Drug use, theft and an adoption? Really?