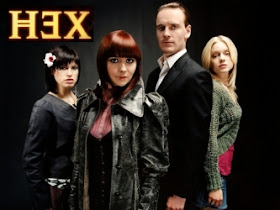 On the side of Team Evil, Jez/Ramiel, the demon-priest has now become the official headmaster of Medenham, alas poor David, the awesome headmaster.

On Team Good, Ella is back to full form, magically and physically, and she, Leon and Thelma have snuck back into the school to hide out in one of the many many many abandoned rooms and hidden passages.

Leon returns to the school as a student, giving Jez his cover story and playing the act of confused, lovesick teenager who didn’t have a clue what was happening, where Ella is or what Ella is for that matter, talking his way back in to be reunited with Tom. Which gives Leon a chance to ask him why he gave them away – to which Tom points the finger at Roxanne who pretended she cared.

Back at Team Evil, Jez is convinced Ella has crawled off somewhere to die and so he can tell Azazeal that it’s safe for him to bring Malachi to the school. Azazeal is worried and cautious about his son’s safety, especially since his master has demanded he leave Malachi alone. Azazeal wants Jez/Ramiel to question Leon further.

He prepares for Malachi’s going to the school, but his caution frustrates Malachi, who also has little faith in Jez, either.

There’s a nice little confrontation with Leon and Roxanne and we see more of Roxanne’s friends abandon her. Her being a tool for Jez is pushing everyone away. Roxanne turns to Jez to try and explain this, how she’s completely isolated, but he’s more interest in having sex with her. And Thelma’s interested in capturing it all on video camera – so she can Ella can watch it later with popcorn and sarcastic commentary.

And share a copy of the tape with Sir Ralph, the school governor, of course. Who is not amused.

Jez forces Leon to take remedial Kendo (yes, Kendo is an obligatory part of the curriculum, as Judo was earlier in the season, Jez has a fetish for Japanese martial arts it seems) wherein he intends to question him further about Ella at Azazeal’s urging. And since Azazeal advocated torture, he probably intends it to be unpleasant.

Or it would be if the full gear of Kendo didn’t hide the identity of the fighter and allow Ella to step in for Leon – the fight in which Jez intended to beat Leon goes the other way instead. Ella reveals herself to the stunned and hurt Jez, who loses his temper and attacks her with a straight razor. Ok, yes it has an edge, which a Kendo sword doesn’t, but if you can’t beat someone with a 4 foot club while you’re carrying the same, swapping it for a 4 inch blade isn’t going to give you an advantage. Ella promptly beats him to the ground.

All of this is witnessed by… Malachi. Who also locks the doors to prevent Jez escaping, not being Jez’s greatest fan. Ella throttles Jez, making intense eye contact with Malachi while he does.

Later, Sir Ralph and Awesome Headmaster David, enter the chapel and discuss Jez’s body – found hanging from the rafters. Their theory is Jez realised he had been rumbled having an affair with a student so decided to end it all. And yes, it’s immensely satisfying.

Awesome headmaster David is now Awesome Headmaster again, he informs the school of his reinstatement, Jez’s death – and welcomes Ella back to the school (she was sectioned, I thought? Pretty sure things don’t normally go that quickly and smoothly). David’s back in charge, definite celebration time. And Malachi is there as a new student – and Ella recognises him.

Roxanne has a private meeting with David to discuss the affair – he, gently, asks whether she encouraged him because “he has to” and she makes it clear the power differential in their relationship – he was a teacher, an adult and a priest. I’d be happier with this if it didn’t feel like manipulative covering rather than the actual truth. And in the common room, the DVD of her having sex with Jez is shown for many students to see, including her friends Alex and Tom. Tom apologises, but Alex shames her and attacks her, blaming her for Jez’s death and encouraging her to keep silent for a while.

Ella starts revealing some conflict about Malachi to Thelma, especially since he helped her kill Jez – and he’s easy on the eyes. This is further built on with Malachi flirting with her in the gym, even when she tells him who she is and that she’s sworn to kill him. Malachi also tries to insert himself as friends of Leon and Tom, and, when Tom leaves the bar, commenting on Thelma, revealing that he can see her to Leon. Leon isn’t a fan – especially since Azazeal, Jez et al tortured and killed his friend Max, but Malachi says he helped Max, that he thinks the death of Jez levelled the score and, as far as he’s concerned, more power to Ella. He shows Leon some of his magic tricks (mind reading) and encourages him to join him flirting with some girls at the bar.

Meanwhile, at Thelma’s urging, despite her reluctance, Ella takes her Sword of Orichia and heads to Malachi’s room to wait his return, drunk and impaired, to get with the stabbing. But inside is… Azazeal. And he’s all sad about leaving Malachi at the instructions of higher powers (he also lets us known that Malachi won’t age any further). He asks Ella to watch Malachi rather than just kill him – that Malachi is a free spirit and even says that he thinks Malachi is a perfect fit for Ella, body and soul (especially since earlier Malachi was asking Leon about what he will do when he ages and Ella doesn’t). Something which probably seems more tempting when Leon arrives home drunk.

Azazeal leaves a note and a parting gift for Malachi – his Stone of Belial.  He is shocked by Azazeal’s leaving and goes to see Thelma in the chapel to ask about Cassie, the mother he never knew. Thelma refuses to share her memories of Cassie, she needs them to hold on to for her to cope. He lashes out at her, using her loneliness against her and calling her a “dyke.”

Thelma, less than amused by this, insists Ella go kill him. Ella, psyching herself up  for the confrontation, finally goes to it. She waits in his room and, when he enters, leaps on his back in a piggy back. No, really, it’s the most pathetic fighting manoeuver ever choreographed and doubly pathetic for someone who has a knife and a perfect opportunity to stab.

Leon also questions why she’s doing this but she ignores him and prepares for a duel, hiding the dagger. If you were going to cheat at your silly duel you could have just stabbed him in the back!

Do pointless, dramatic duel in the chapel. Much fighting back and forth with shiny swords, until Malachi is disarmed and cheats, drawing a knife. So she draws the sword of Orichia and holds it to his throat. And can’t do it. Yes, she could kill the baby, she could kill Cassie, she could kill dozens if not hundreds of women throughout the ages, but not Malachi because he’s hot?

I call shenanigans to him having the right to set terms to their duel. Why was this dagger even forged if it turns out he can force a deal that prevents her from using it? And you have to call him out and fight a duel with rules, but it’s perfectly ok to kill scores of unarmed, helpless pregnant women Azazeal has slept with? Where did this moral quandary come from? Don’t tell me it’s conscience, not after the scores of innocents Ella has killed, this is libido talking.

And I am so beyond not happy with the Roxanne  storyline. While Roxanne is not a pleasant person, she is also a victim. Yes she made the moves on Jez first – and? She’s a teenager, he is an adult, a priest and a teacher; it doesn’t matter how much the hormone riding teenager tries to seduce a teacher, it is always the teacher’s fault if they say yes because they’re the adult with authority. After which we saw repeatedly how Roxanne was used and manipulated, ostracising her friends for the sake of Jez, again, she was a victim. This episode’s whole Roxanne comeuppance moment leaves a nasty taste in the mouth – Roxanne wasn’t Jez’s co-conspirator, she was a manipulated teenager being used by a demon.