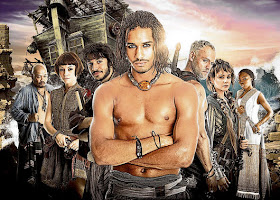 Finally after much sailing and following of maps, we arrive at the Land of the Dead. Or rather the great big whirlpool which will take them there (by drowning them? Hey, it would TECHNICALLY get them there, right?). After a harrowing descent into its watery depths, they end up in a grand underground cavern.

Time to sally forth to find Sinbad’s brother – naturally he gives them a chance to stay with the boat but they’re not going to abandon him (well, Cook stays on the boat because he always does. I’m sure he’s a spirit of the Providence or some such. And he does have an excellent goodbye).

Tiger is possessed by Taryn, and through her eyes we get to see some of Taryn’s past and, possibly, her motivations. When she was younger, a poor woman in Basra, she begged a doctor to heal a child and promised the child she would get help -but the doctor wouldn’t help since Taryn couldn’t afford his fees.

Through the cavern they discuss their cultures’ different beliefs of the afterlife – and they find a gate that even Gunnar cannot open. But, at a suggestion from Taryn/Tiger, Sinbad tries and is unlocks itself (some of that chosen one mojo kicking in). Leading them to the bleak, empty, ruined plain of limbo. Silent – except for some eerie roaring. And the sound of running feet – a figure Sinbad takes to be Jamil and runs after him asking the others to wait.

Running through the ruins he catches the fleeing man – it isn’t Jamil. It’s a panicked man talking about creatures “waking up” and “showing you the light” and the truth which is apparently a bad thing. And speak of the giant squiggly manta rays, one appears behind Sinbad and unleashes its ultra-bright tanning ray – which causes him to have visions of Basra, a crowded celebrating Basra. As he pushed through the crowd he is told it is a celebration for the Emir’s birthday.

Gunnar, Tiger, Anwar and Rina search for Sinbad – and Gunnar isn’t happy. He accuses Tiger of goading Sinbad on in the last few days (presumably off screen), driving him towards the Land of the Dead. She protests and he hits her – much to everyone’s shock. Gunnar grabs her and points out that Tiger, a brilliant and skilled warrior, could easily have blocked the blow – and this isn’t Tiger (this is one of the hugest leaps of logic I’ve seen on  a show in a long time – I can only assume that Tiger was acting VERY VERY strangely offscreen).

He throws her to the floor and it dislodges Taryn, sending her rolling out of Tiger (what, did she lose her grip?). Gunnar is all for slicing and dicing her, but Tiger stops him, telling him that Taryn isn’t here for malicious purposes (presumably she’s there to find the girl she couldn’t save). So she joins the merry band in rescuing Sinbad who is having a really bad trip. Gunnar manages to distract the snaky-manta-ray-tanning-booth and they drag Sinbad to safety. Sinbad, though, is stuck in la-la land, first fighting Gunnar in the market, then being taken to be healed by Anwar, neither of which recognise him in the vision.

While he’s free form the snake, he can’t be removed from the vision – only Sinbad can free himself. So Gunnar suggests Taryn sneak into his head to help – it may kill him but that’s possible death vs certain death. In the vision, Sinbad is trailing a confused Anwar as he tries to see his brother – who doesn’t recognise him and says his mother died in childbirth – he has no brother. Oh, Anwar also adds that he has not heartbeat.

Sinbad cracks and runs, locking the gate behind him, he runs out into Limbo to offer himself to the snakey things. But is stopped by – Jamil! The real one this time, who leads him – and his group, to a safe hidey-hole away from the snakes. There is much rejoicing and they look over the maps Jamil has made of Limbo while he’s been there – all the hidden tunnels and hiding places. But Taryn hears music – the lullaby she used to sing her daughter when she was ill. She asks for Sinbad’s help but he’s more than reluctant all things considered – so she walks off with dignity (and Orla Brady does excellent dignity) until Gunnar and Sinbad’s conscience pricks them. They agree to help.

They enter a spooky, dusty library and find Elena, Taryn’s daughter. She has heard of Sinbad, read his story – the life of everyone who has ever passed through the Land of the Dead is in the library. It seems Sinbad and his mother did die in child birth, but his father, a powerful mage, intervened. Doing so nearly destroyed the city – and left their mother catatonic, but it saved Sinbad (though he only knew his father as a drunken farmer who abandoned them).

Further exposition is interrupted by giant hellhounds that they have to barricade the door against. Except Anwar who is browsing the awesome library – and finds a map indicating a hidden door, which Rina then picks while Gunnar and Tiger fend off the nice doggies (nice use of all the character’s skills there).

As they leave a dark spooky voice keeps chanting Elena’s name and it grows dark with the snakey things chasing them. Until they stop, wait for one to catch up and all stand still and watch Jamil do the noble-sacrifice thing, letting the snakey thing take him so they others could stand and watch him do it… presumably this helped them escape

Back on the Providence and in the Land of the Living – wait, what, did we miss something? We just skipped the whole sailing back up a whirlpool and all that? Apparently – anyway, Sinbad now has extra extra angst. He also adds some “I’m going to get you all killed” which Anwar disputes and points him to his vision – Anwar and Gunnar’s lives were so much worse (apparently) and Sinbad saved them. That seems to brighten them up, just in time for a conclusion and plot hook for next season – deep, scary darkness in Elena’s eyes.

This episode did a lot right, there was a plot and one they stuck too. The cinematics were great and we got a lot out of the location and setting. It pulled off creepy and pulled it off well. I also liked seeing more of Taryn’s history and motivations and the action scenes were also pretty well done. It was what the whole series should have been

But there were shaky moments. Gunnar’s sudden insight into Tiger was a trifle contrived since we’d seen no indication that her behaviour was off – especially given the relatively short period of time the crew has known Tiger. But that faded into insignificance next to the sacrifice of Jamil. Apart from invalidating the entire second half of the season and their entire motivation, the way it was executed was poor. They weren’t even hurrying when he decided to sacrifice himself, they weren’t trapped and when they had the show down everyone kind of stopped and watched. Afterwards we just kind of teleported back to the Providence in jarring fashion. I actually didn’t realise what was going on when Jamil kissed Sinbad and told him to live for both of them – they didn’t give us an adequate reason or set up for the sacrifice

So, season finale and I won’t lie, it has been a long and not a great trip. There was a lot of great lore and world building in the last episode – but

I have no idea why they dumped Nala for Tiger (well I do, but they’re largely based on Nala, the dark skinned Black woman being set up as Sinbad’s love interest and the show already having a POC protagonist and Cook so they filled their inclusion quota – yes, I’m cynical) – though it would probably have helped if Nala had any skills at all to offer the team. She could have been set up as a great diplomat or having a lot of knowledge of other cultures, but she was pretty much relegated to she-who-stands-watch because she had no useful skills. It’s shoddy writing, they could easily have So instead they replaced her with Tiger.

Tiger. Who was raised by Tigers. And can kill things. (I think Tiger was the second choice, they were going to go with “Stabby Knife” who stabbed things, with knives). Did the actress who played Nala get sick or decide to leave? I can’t think of any other way to clumsily write in such a non-character. And I await one tiny indication as to why Tiger joined the crew and decided that visiting the land of the dead was a great idea!

And the story itself meandered back and forth rather drunkenly. There was a lot of plot and history in the last episode – and some of that could have been doled out more during the rest of the season. Instead there was a lot of monster of the week and a lot of time wasted. And, frankly, not very good writing. I have a horrible feeling that the writers just dismissed this as fantasy fluff and didn’t bother to be internally realistic. Too many of the episodes requires leaps of logic and brain twisting – yes it’s fantasy, no, that doesn’t mean you plot doesn’t have to be internally consistent.

Inclusionwise we had no GBLT people at all and I would have been much happier with Rina and Nala being given a more prominent position in the plot lines (Gunnar and Anwar seem more important secondary characters) or Tiger being given a character. We do have a POC protagonist which is a relief (I was dreading a white Sinbad) as well as Nala and Cook (who, despite being a Chinese wise-man stereotype, is also awesome and the only reason I keep watching) and regular appearances of POC in many of the episodes. I’m still narked about Nala though.