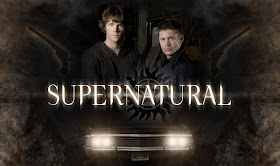 I do so love this show. It gets so many things right.

The first thing it does well is Monster of the week. It’s hard with a show of this format not to have monster of the week – week after week of seeing a different gribbly creature that the brothers then kill, ta-da. The problem with this is after 4 or 5 episodes of them in a row, the programme feels pointless and the series feels like it’s mired and going nowhere – see Grimm Season 1 and Haven, for example. But Supernatural always has something else going on – the “previously on Supernatural” are always needed and always relevant. The plot advances, the characters develop, something meaningful happens every episode. It could be the characters recovering from an emotional trauma or coming to terms with what’s happened. It could be them deciding what to do next in terms of the meta plot. They learn new things, or grow as characters or work through their latest trauma or build the greater world or otherwise extend or develop the plot just about every episode – and you don’t get 2 episodes together where something hasn’t moved forward or developed – even if it’s just mentioned and talked out. The meta runs alongside the plot, it isn’t lost in it.

And the plot is fun, exciting and epic – and it’s maintained epic. The season builds to a slow crescendo from the horror, grief and generally being lost after John’s death through to the slow revelations of what it means to be one of the Special Children for Sam. Being one of those Yellow Eyes – Azazel – has chosen to give his special powers to, these special abilities to. Cumulating in not only gathering all of these special people together in a duel to the death to find the best – but reaching an ultra epic peak with the opening of the gateway to hell and the final vanquish of Azazel. It develops at an excellent pace, it builds its foreboding, gives us a full season priming us for just how epic it is then we have an amazing, powerful, grand finale of excitement, death and the world hanging in the balance.

The plots themselves, week in week out, are also pretty good. They’re original for the most part  - in fact, I think every episode of these season was something I hadn’t really seen elsewhere. It doesn’t follow the same formulaic patter of Urban Fantasy and it is interesting to see the switch from vampires and werewolves to demons and ghosts. I also like that the same monsters will re-appear – like the shapeshifter – because just because they’ve killed one doesn’t mean they’ve killed every last one, after all. Among these very original episodes were some really powerful ones – like Molly, the ghost who didn’t realise she was, seeking her husband and being tormented by the ghost of the man she killed. Or Sam and the werewolf Madison and finding that no, there isn’t a cure and there isn’t a happy ending. Then there were the fun, rather cheesy episodes with the Trickster and the horror movie set, that were nicely timed a break in the grittiness that characterises the show and adding something almost a little silly.

The acting is also extremely well done – including with many side characters (Molly and Madison as I already mentioned) carrying a lot of the pain and fear which, combined with decent writing and a special effects budget, really created the atmosphere, excitement and feel of the story. The acting of the Winchesters also bring the emotions home. There’s a lot of angst in this genre – a lot – and usually for very little reason or for very convoluted reasons and the angst is normally very dramatic, with wailing, crying, tooth gnashing and the whole nine yards. But in a few short scenes over several episodes we get the full sense of how hard it can be for Sam and Dean – the pain of losing their father, the fear of Dean dying in his hospital bed, Dean’s guilt over the deal his father made, dealing with what Sam may be becoming, what it could mean and whether he’s evil. Heavy, high emotions, excellently and realistically delivered within their characters without robbing them of impact.

There were some issues which were also surprisingly well covered - like Dean's insistence that just because a ghost is murdering convicts in a prison doesn't mean it's not important or the victims are negligible or not worth saving and the sacrifice Dean and Sam have to make to live the life they do - but why it's worth it.

So many reasons to love this programme – and yet, as a social justice blogger and a marginalised person, I cringe to watch it. This show is stunningly erased with little more than token inclusion – if that. Not only are the two main characters straight, cis, white men but it’s rare for anyone but straight, cis white men to have any presence in the plot. It is a straight, cis, white, male big damn hero power fantasy. Now, it’s a great one, it is, the story, the theme, the emotion – perfect – but it’s grossly limited.

POC are very very rare (and often victims when they do appear – we have some bit parts show up before they are eaten/killed/mauled by the monster of the week – I believe there was a Black man who died to the Croatoan plague, 2 Black men who made 10 year soul deals with the crossroads demon). There were 3 Black men who made up the entirety of their recurring POC characters – and I am being generous here. 1 is Agent Henrickson, the FBI agent trying to hunt Sam and Dean down, so an enemy. And he’s not so much as a recurring character in season 2 so much as he will be. The second is Gordon, the sociopathic and lethal hunter who wants to kill Sam (another enemy) who ends up arrested. And Jake, fellow psychic child like Sam, who ends up working for the Yellow-eyed demon Azazel (yet another enemy) and Sam murders.

The lack of POC is especially annoying when we consider that Supernatural likes to use supernatural beings from many different cultures. Now, while it’s nice to see something stepping outside the norm of western mythology (except for Wendigos – Wendigos have become damn compulsory) and it adds a lot more richness to the world, it’s problematic to borrow creatures from foreign or native cultures with only a rudimentary – or non-existent – inclusion of that culture. With virtually no POC, Supernatural has borrowed Tulpas, Wendigos (of course), Rakshasa, Djinn and a Native American Curse while having virtually no representatives from these cultures present. We even had a white woman practicing hoodoo.

In terms of women – we have a lot of murder victims. We also have a lot of male victims as well, but women are so absent from other roles in comparison that it’s glaring. Especially as there are a lot of romance/love interests who are menaced because they are romance/love interests (Madison in particular made me cringe as did Episode 5 with the mind controlling Special Child being driven to action to save his girlfriend). And even more especially when we consider Dean’s general attitude towards women. The only recurring women are Ellen and Jo based out of the Roadhouse. I like both characters a lot – but they could do to be around more often, Ellen as a source and mentor and Jo as a hunter. I especially don’t like that Jo had to be rescued by the Winchesters on her first hunt – and rescued from a ghost that targeted “petite, blonde women,” which went a long way to undermine her presence as one of the few strong women on the show.

After yet another series of gay jokes we have one lesbian. She appears for 5 seconds in the second the last episode, lesbian is pretty much all we know about her before she becomes the first of the psychic children to die. For extra funsies, her power means she kills everyone she touches and, for bonus points, she touched her girlfriend – so that whole gay-intimacy-is-punished trope is still alive and well and beginning to smell more than the bones they dig up.