Review: Agents of Light and Darkness by Simon R Green, Book 2 of the Nightside Series 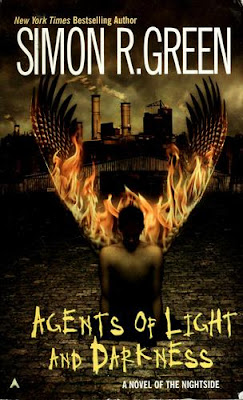 John Taylor is back in the Nightside with his ability to find anything, anything at all, anywhere.

Which makes him in high demand when the Grail disappears – the Unholy Grail. The cup that Judas drank from. A cup that corrupts all those around it, a cup that could very well bring about the end of the world.

It’s in the Nightside and lots of people want it. More than people – the Angels of Light and Darkness want it as well – and they’re willing to rip apart the entire Nightside to get it. They’re not subtle and they’re awful investigators, but no force can stand against them for long, and everything risks being utterly destroyed before they’ve finished.

Which leaves Taylor the problems of finding the Grail, deciding who to give it to – and making sure the people who want it don’t get the Grail first and don’t kill him to stop anyone else getting it. And with Nightside under threat, the big powers of the strange world come out to fight.

This book is fantastic. It seems to be a theme of the series – the fantastic. The Nightside is a place that contains literally everything – in all its wonders and its horrors (mainly horrors). The world has no rules and anything exists there – the richness of the imagination of this place is incredible. From magic to sci-fi, gods to aliens, monsters – to things I can’t even describe, things that don’t fit in any category, they’re all amazingly imagined.

And it’s all very dark and very gritty. Nothing is pretty or sweet or generous or kind in the Nightside. Even the apparently harmless is dangerous and there’s a well maintained theme of constant risk, of constant menace in the book. There is no downtime or safe space – and that isn’t just because of the story, but a constant theme of the Nightside itself. The only safety the characters earn is because, as John  Taylor and Shotgun Suzie, they have a reputation as people who are extremely dangerous. The only safety is being a bigger threat than those who want to hurt you. And it’s not just menacing, it’s disturbing. It’s never as simple as just bad guys who want to kill you – bad guys who want to kill you are nice and kind combined to what half of what the Nightside does. The menace here is a surreal, almost nightmarish quality and linked to just how strange and fantastic the world is.

What I find most impressive is not how both of these are introduced – the fantastic and the constant menace – but how it is constantly maintained with little references, new figures, new powers introduced just to show another facet of this strange and terrifying place.

This maintenance of theme also did a lot to establish the sheer might and fury of the angels (even if they started out almost dismissed when Taylor artfully turns the two factions against each other). No matter how many horrors we saw, how much power  the Nightside shows, the invasion of the angels was destroying it. It also serves a lot to establish Taylor’s power – he rarely overtly shows his abilities in a menacing way and the ability to find anything does sound pretty minor – but the way everyone is afraid of him establishes his menace far more than dramatic displays of flashy abilities.

What didn’t come through quite so well was the story itself. Don’t get me wrong, it was a fun story, an exciting story and one filled with amazing characters, amazing settings, revelations and showdowns and it was one I enjoyed immensely and couldn’t tear myself away from. But it did feel slightly like a story that existed to show off this amazing, wonderful, terrifying world, more than a world that existed to tell a story. That’s not necessarily a bad thing – and this world certainly needs showcasing – but the plot itself was relatively linear. Clues dropped in Taylor’s lap that he kept following up to more weird locales, more dramatic confrontations and more expansion of the world. In the end he has a grand inspiration to buy himself time – which is epic and dramatic, and everything is wrapped up extremely satisfying

But the plot is a tool to advance the characters and the world, not the other way round. It isn’t full of twists and odd turns. It does have lashings of epic – but that’s because you can’t cross the road in the Nightside without lashings of epic raining down on you. Going to the shops for a bottle of milk involves wrestling 3 demigods, facing 6 apocalyptic beings and dealing with forces man was not mean to know. It’s the Nightside, epic, drama and the fantastic are its bread and butter.

There are some minorities that are largely background characters – in fact, characters is going too far as they often don’t have names and are more crowd fillers than anything. And, some of them, like the Lesbian Undines drinking each other, seem to serve to stress how weird and odd the Nightside is more than serve any actual inclusions. Still, I do love the bouncers in the bar and would love to see more.

Shotgun Suzy is a character I’m conflicted about. After the last book I said I wanted to see her develop more than being just a walking weapon. And that happened a lot in this book – but as is so common with strong female characters, she was developed by dumping a huge portion of angst on her. She has a history of extreme abuse, rape and incest which lead to an aborted pregnancy that left me uncomfortable – not just because they were uncomfortable topics, but because of the way powerful, dangerous women always seem to need a vulnerability, a victimisation somewhere. I hope she will be developed further in a way that isn’t about her being a weapon or a victim – but I fear the third option will be as John Taylor’s love interest. Which could be a fascinating direction – but not if she is either a weapon or victim, she needs to be a full character first.

This is the second book in the series and it continues to be immense fun. The books are shot, exciting - and I’ve overused the word but there is no better – fantastic. I have never come across a world like this, it’s utterly unique, completely absorbing and I love it. We have meta plot, the ongoing question of Taylor’s mother and where that fits into everything, lurking along the sidelines and we have some truly amazing characters that are great fun to read.