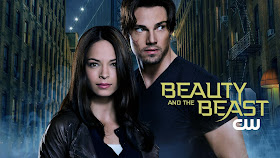 Crime of the week – someone takes a pot shot at a celeb in the middle of a screaming crowd. He’s Jake Riley and after 3 minutes of him talking to Tess and Catherine, I’m sorry the bullet missed. His manager has a huge bag of hate mail to show them (I can’t think why).  Just to make him even more pleasant he decides he’s happy to have one of them with him at all times – so long as it’s Tess. She’s thrilled, really. And if you’re going to get an actor to play a singer couldn’t you have got one who can sing? Ye gods, it’s like watching X-Factor auditions

Evan is still unable to put his abduction and torture out of his mind. In particular, he can’t get over the fact his vigilante saviour wasn’t human. Catherine begs him to let it go and insists, again, that she didn’t see anything, honest. And then dumps all the hate mail on him to DNA check.

Investigating, Catherine finds out that Jake is in a twitter war with tween sensation Lil Tap That (gods preserve us all)

JT and Vincent enjoy some recapping and are still trying to cure his become feral whenever Catherine’s around (probably a really strong indication a relationship isn’t going to work. 1. You don’t like her friends. 2. You can’t stand his annoying habits. 3. He becomes a feral monster and kills people whenever you’re around. It’s got to be in the top 10). JT keeps experimenting and one of his experiments cause him to flash back to when he first got the treatments to turn him all beastly – and the doctor attending him is Catherine’s mother.

They come to the conclusion that the memories were suppressed by Muirfield (no, really? Honestly, stop treating viewers like fools that need everything spelled out) There follows the standard debate on whether to tell Catherine – Vincent wants to protect her and JT says she’d want to know.

JT calls Catherine and she comes running (leaving her case – again - and poor Tess to babysit). They tell her the big news and she isn’t surprised – since the Muirfield blokes who captured her showed her a picture of her mother with other Muirfield scientists, but she hadn’t believed him.  JT and Vincent aren’t exactly thrilled with Catherine keeping that secret.

To reveal more secrets they induce another flashback – all the soldiers are rhapsodising about how awesome it is on the treatment until Vincent’s fellow soldier, Lafferty, zones out then goes berserk and smashes the table with her first. Catherine’s mother, Dr. Chandler and co hurry with syringes full of meds to bring her down. Later, Dr. Chandler questions Vincent about his progression and reveals she’s helping in the war so she can return to her daughters. She tells Vincent Lafferty is having blackouts that they’re treating and he may suffer the same – but everyone is reacting differently to the project.

When he wakes up, he tells Catherine that the blackouts aren’t caused by her and her mother was working to fix it. Catherine has a guilt moment since she idolised her mother and is now finding this unpleasant facts about her – but realises that her mother wouldn’t have destroyed her work, she just needs to find it.

Catherine goes to see her father to look at her mother’s things but he says it was packed away for a reason – she did a lot of classified research for the government. Catherine’s upset that her father knew and never said anything. He wanted to protect her from having her memories corrupted. Catherine’s angry he made the choice for her, especially since she spent so long blaming herself and he had the answers.

She gets the boxes of files and opens a phone conversation with JT who helps by backseat detectiving. They find the notes – but just by glancing over the phone JT knows they don’t have the equipment they need. But the police forensics lab does.

On the actual case Tessa calls in Lil Tap That (ye gods) who says everything’s fake – the Twitter war, he even thinks the assassination attempt is fake. Their managers will do anything and push anything to get them media attention. How do we know this? Because Catherine is returning to work to actually sneak JT inside (she almost pays attention to the case. Almost). She lures Evan outside since he’s waiting on results (and apparently staring into space) and blocks the door as she leaves, allowing JT to sneak in.

Catherine takes Evan to Jake Riley’s manager’s office since financials show that he’s withdrawn a large sum of cash lately – possibly to pay a hit man for the publicity stunt. They find a thumb drive and when they check it they find that it’s a memoir – and the last, unwritten chapter concerns the tragic death of Jake Riley.

JT manages to dodge Tess and Jake Riley (Tess takes him to the morgue so she can freak him out with the gruesome corpses) and escapes back to Vincent with the formula. But there’s a problem – Vincent isn’t in his cage and the cage has been badly mangled.

Vincent appears, looking gruesome and scary and he has a flashback. He hides in a store room when a general and Dr. Chandler comes in. He tells her that her creations are destroying the compound and unless she can cure the side effects the project will be abandoned and the soldiers terminated. She protests that they can’t kill their own men but he says they’re animals. She tells him that the world will find out, they can’t lock them down forever. The general takes that as a threat and points a gun at her – until Vincent leaps out and tackles him. He fights the general, but in the process gets the cut on his face.

Vincent chases JT around, re-enacting the fight until Catherine arrives and starts trying to talk him down, he turns back to normal. Vincent is determined to end it, especially seeing JT’s minor injury, and takes the formula without it being tested. It’s not like the cage can keep him anyway. They have to wait to see if the serum takes effect.

On the actual case, they walk Jake Riley out at night with Miller – who hangs back and sends a text as they leave. Outside Miller, his manager, ducks into cover. The shooter comes out to play and Tess, undercover, beats him down. Catherine arrests Miller, saying he saw the shooter before anyone else. Jake confronts him – he tried to kill him for a book.

Tess briefly mentions to Evans about the man in his lab which confuses him and Jake installs massive speakers into her police car (and is still annoying). He seems to be growing on her like fungus

Catherine talks to her father about the guilt she had and how she was living in the past. From there she goes to talk to her mother’s grave about wanting to bury things and having to clear up the mess she left behind. Vincent appears behind her – allowed out! – to assure her that they will make it right. The serum worked – no more blackouts, no more cages, but he’s still what he is. He speaks on Dr. Chandler’s behalf, saying she did her best for her people and was backed into a corner. Catherine holds that she still lied – which is what she is doing to all her friends. They wrangle on guilt for a little but Vincent thinks there’s been enough guilt and blame.

Ok, how does Catherine do this? She just leaves in the middle of the case and stays gone for hours, days even. At this point I’m not even sure why they keep up the pretence of police investigations since Catherine’s, at best, only vaguely interested.

Things are moving forwards quite well and I’m trying really hard to like this episode because I should. But I don’t know whether it’s because it’s taken so long, or there’s so little that’s original in the show, the writing, the acting or the endless angst (and mainly from Catherine at that) but it just isn’t drawing me in. And I can’t quite put my finger on why

I think the theme for today was keeping secrets and protecting people by doing so and why you shouldn’t. Which is nice but it got kind of derailed and spotty – which they seem to do a lot. They decide on a theme but then get distracted then rush back to it.