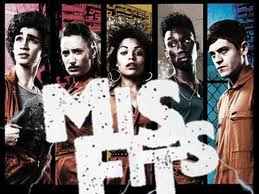 The community centre is hosting an Athletics training camp for women – something Curtis notices. He’s desperate to get back involved with running after losing his opportunity and decides to join in using his power to turn into a woman.

Curtis does extremely well and is noticed by the trainer of the camp who thinks he could do much better with a coach and achieve much more, but Curtis says he just wants to run. In female form, Curtis introduces himself as Melissa, meets Emma a fellow runner (who strips naked in front of Melissa/Curtis in the changing rooms leading to a less than graceful exit) and is creepily hit on by the probation officer who is all kinds of skeevy. Emma also gets to meet Curtis in male form working at the bar and recognises him as a once-famous runner. Flirting ensues.

The next day at community service, Curtis is all smiley after having sex with Emma, Rudy is trying to get Simon to use his powers to predict the lottery and Kelley runs across Seth having car trouble.  Using her rocket scientist brain she easily fixes it and Seth insists on giving her lift. Of about 20 yards since she’s nearly home anyway. More sexual chemistry brewing.

Back in male form, Curtis runs into Emma again and she quickly tells him to forget about the night before, they were both drunk. Rudy says stuff (nothing good comes of listening to Rudy). Pride wounded, Curtis goes to see Alisha and ask if he was a bad lover. Alisha says no, but not in a very convincing way. Curtis gets angry and asks if Simon is a better lover than him – clearly doubting that Simon could possibly be better. Alisha takes offence at him speaking about her boyfriend that way and tells him the truth – Simon is focused on her, Curtis was focused on himself. She also criticises him for his negativity and complaining.

Kelley and Alisha spot Seth being shady and follow him – he puts flowers on the grave of a Shannon Speers, who died aged 23. Alisha realises Kelley fancies Seth. And Simon walks in on Melissa/Curtis in Curtis’s locker and finally sees what Curtis looks like when he’s transformed into a female body. Melissa/Curtis swears Simon to secrecy – but Kelley sees them.

At the club, Melissa/Curtis is made uncomfortable by all the guys looking at female-form him but he dances with Emma and there’s lots of touching going on. Back to Emma’s place, Emma asks Melissa/Curtis if he’s gay then they kiss and have sex.

The next day Curtis discusses the night with Simon, comparing male and female orgasms. Simon asks if Curtis is a lesbian but Curtis says even when he’s in a female body, it’s still him and he likes girls (i.e. he’s still a straight man in a female form). He asks if Emma is a lesbian and neither of them can muster up the word “bisexual.” Curtis wants to be with Emma in male form and approaches her and apologises for the other night.

The next day Rudy says something (it’s Rudy), Melissa/Curtis greets Emma – and the coach gets creepy and gropes Melissa/Curtis in the pretence of massaging out an ache in his thigh.

At the party (there’s one for the running camp) creepy coach dissolves a pill in a drink and gives it to Melissa/Curtis while talking about one on one training. Melissa/Curtis brushes him off, then has to dodge Rudy before dancing with Emma. Rudy drinks, they dance – and Melissa/Curtis gets more and more woozy until Emma leads him to the changing rooms to lie down.

Melissa/Curtis fades in and out of consciousness as the coach fondles him, takes down Melissa/Curtis’s underwear and begins to unbutton his own trousers. The coach gets out of the car to pull his trousers down and crawls back in – to see a penis. Curtis has changed back into male form – and punches the coach. Curtis hurries away and returns home to his flat.

Where Emma goes to talk to him. She arrives upset but says to put it aside. She comes onto him but he says he doesn’t think she really wants it. As she begins to strip he tells her to put her clothes back on. He doesn’t want to be a revenge fuck for her. She, seeing a different side of him says she’s wrong about him and they kiss and she gets dressed. But then she spots the golden dress she leant Curtis/Melissa and thinks Curtis is sleeping with Melissa. She leaves in a fury.

The next day Melissa/Curtis explains the whole thing to Simon who gets very very confused. Melissa/Curtis goes into the centre and runs into the coach who makes it clear he expects both of them to say nothing of what happened.

Then there’s a multi-stage confrontation in the changing room. Kelly confronts Melissa/Curtis for flirting with Simon, overheard by Simon and Alisha which amuses Alisha not at all. Rudy is still Rudy and vile. The probation officer is there it stir the flames and Emma bursts in and slaps Melissa/Curtis for sleeping with Curtis then storms off. Not really Curtis’s day. The probation officer makes a comment and Melissa/Curtis  laces into him for leering and groping – then on to Rudy, yelling at them that they don’t know what it’s like to be a woman. Everyone stares rather shellshocked and we see a blood stain on Melissa/Curtis’s trousers. Yes, that time of the month. When Melissa/Curtis leaves, Simon tells the others that Melissa is Curtis. Rudy instantly starts gagging.

Kelley goes into the bathroom to help Melissa/Curtis and offers a tampon (and advice). Curtis shifts back to his usual body. As he leaves he tells Simon that he’s going to tell Emma.

Switch to Emma, she’s packing and the coach knocks at her door – offering one on one training. Curtis arrives and one of her neighbours tells him she’s gone for a drink with the coach. Curtis runs out the room. The scene is then intercut with Curtis running hurriedly while the coach starts to undress the unconscious Emma. He arrives in time, grabs the coach and punches him repeatedly – then kicks him in the head.

The next day Emma wakes up and staggers out of the car park to find Curtis. He tells her what happened – and he shows Emma his shapeshifting ability. Back in Curtis form he explains he did it so he could run again and Curtis realises he needs to find something else in his life that makes him feel as good as running did.

And they take the coach out of the boot of the car, strip him naked, tie him to the side of the running track with the words “I drug and rape girls” written on his chest.

Curtis packs away his running gear (he and Emma having clearly slept together again) and says goodbye to Emma as she gets on her bus and leave. He then takes a moment to tell Rudy what an arsehole he was for not realising Curtis/Melissa was drugged and how he should never touch a woman when unconscious or clearly incapacitated. Rudy, of course, learns nothing.

I refer to Curtis with male pronouns throughout because it’s pretty clear that Curtis thinks of himself as a man even when his power has changed his form.

I think this episode did a good job of showing Curtis about not just the horrors of rape, but also the pressure of the constant leering, come ons, guys who don’t take no for an answer that many women face. And because we saw it through Curtis’s eyes there was more overt lampshading of it because of both audience awareness of “Curtis is really a man” but also the actor showing how surprised, uncomfortable and shocked Melissa/Curtis was being unused to such constant aggression. It’d earn a lot more points if we didn’t have Rudy giving Melissa/Curtis oral sex and playing it as a joke.

It’s further undermined by Melissa/Curtis’s epic and accurate rant at the probation officer and Rudy being put down to being PMS mood swings. Nothing Melissa/Curtis said was wrong but it’s hard not to see it cast as “emotional” and “irrational”.

After 2 seasons of homophobic jokes, Misfits has a bisexual character, Emma. She has sex with Curtis – in both forms and the end result is Curtis leaning how to be a better lover. There, having improved the performance of heterosexual Curtis, we will never see her again. Frankly after a long erasure, a lot of homophobic “humour” having a bisexual woman appear to have sex with a straight man using a magic power to appear female for his growth as a lover is not redeeming anything.