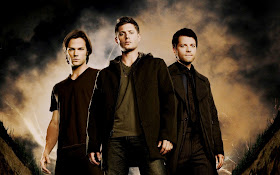 Benny has found himself a job – working at a Cajun Café in Louisiana for a woman called Elizabeth (why do I think something’s going to eat her?)

Closing time, he leaves the café followed by one of the patrons with a knife – and he hears something else in the bushes. There’s some scary noises – and the man with a knife trips over another man’s corpse.

Ah let me predict – Benny is suspected of killing people. Sam wants to kill him, Dean doesn’t want to, Castiel is awesome (the last is a given).

To Sam and Dean where we reveal that the Hunter tracking Benny, Martin, was until recently in a mental institution (I believe we saw him in passing) which prompts all kinds of fail from Dean. And that Sam was helping him back into the game by having him track Benny – wow, Sam really is a grade A arsehole isn’t he? He had Martin track Benny because “no hunter worth his salt” would let a vampire go

Excuse me, Sam, didn’t you just take a year off hunting? Didn’t answer your phone, didn’t try to find your brother, left Kevin twisting in the wind? But this vampire – alone of all the monsters you’ve ignored – this vampire simply must be tracked?

Do down they go to Louisiana to see Martin. Up until a week ago, Benny has just been minding his own business. And he reveals he didn’t see Benny do it – he saw Benny leave the path then he found a body with its throat ripped out. Dean’s insistent, he owes Benny a proper investigation and he’s not going to just chop his head off without proof – Martin just wants to get on with the decapitation.  Sam, big of him, gives Dean 2 hours before more pointless flashbacks strike. I’ll review them later in the recap, I may actually have dragged up some care by then.

Dean goes to the Gumbo shack and talks to Elizabeth about “Roy” (the name Benny’s using) and learn that Benny’s gone fishing. Leaving his number with Elizabeth Dean gives Benny a call and makes it clear how bad things look. Benny, however, is busy disposing of a body. Which is when Dean catches up with him and Benny claims it wasn’t him.

Benny wants to talk, though Dean has his big vamp-head chopping machete which rather puts a damper on things (and he won’t put it away). Benny explains there’s a rogue vamp called Desmond who remembers him from the “good ol’ days” who is starting a new nest. Benny told him no – and Desmond is trying to roust him by dropping bodies around him. He doesn’t want to leave because Benny was actually born in this town and refuse to let a young amateur force him to leave.

Oh and Elizabeth is Benny’s great great granddaughter. And Benny is not amused by Dean’s flirting with her. Being around her helps him reconnect with family and fight the hunger and Dean warns him about the hunters hunting him (he knows – he spotted Martin already). Benny decides it’s time to kill Desmond which, y’know I kind of assumed was a given. Dean says Benny needs to sit down and let him handle it because Sam and Martin will slice first, ask questions later.

Dean gets to go explain this to the ranting Martin. And Sam asks if they’re really just going to go on trust here – Dean unleashes a positive nuke saying yes he is, because every relationship he has had has gone to crap at some point and Benny is the only one, ever, who hasn’t let him down. Ouch, take THAT Sammy.  Sam gets passive aggressive at that “must be good to have finally found someone you can trust”. Because Sam is so trustworthy? The Soulless, demonblood drinking, left Dean in Purgatory for a year, Sam?  Dean insists Benny is innocent and warns them that if they go after Benny, he’ll probably kill them. Sam asks if he’ll risk innocent people on Benny’s word alone – Dean says he will. So Martin hits him and knocks him out.

Martin tells Sam here’s the chance for them to go hit Benny and Dean has made his choice. Sam splutters… and agrees and off they go. Someone really needs to replace this guy with Castiel. Dean wakes up cuffed to a radiator which he promptly picks, grabs his phone and calls Benny to warn him despite Benny dismissing Sam. Benny wants to go after Desmond and Dean can join or not – but Benny won’t be sidelined. Sam and Martin arrive at Benny’s abandoned camp – and Sam gets a message from Amelia saying she needs his help – he instantly tears off, abandoning Martin.

Dean and Benny enter Desmond’s lair – and Dean gets jumped, his sword knocked aside, his vial of dead man’s blood destroyed, the vamp goes in for the kill and Benny lops off his head. But in the fight Dean is injured and Benny is briefly… mesmerised by his blood.

In the aftermath, Benny realises he has to move on. Word will get out, more hunters will keep coming. He doesn’t get a home or family (and Dean has definite doubts about his own family). Benny has to go underground.

Alls well? Not quite – Dean calls Martin to let him  know the situation is all taken care of. And Benny gets a call from Martin using Elizabeth’s phone – he’s in her diner, borrowing her phone. Benny hurries to the gumbo pit to find that Martin has taken Elizabeth hostage and is holding her at knife point. Benny begs Martin to let her go, that the bad guy is gone. But he cuts a small wound in her throat, spilling blood to rouse Benny’s husband. He rants and raves and tells Elizabeth everything – that he’s a monster, her great grandfather all the while Elizabeth panics and Benny fights guilt, shame and hunger. Martin says he wants Benny’s head on a stake

Benny walks to the counter and lays his head on the countertop, Elizabeth begs no and Benny whispers he’s sorry. Martin lunges and Elizabeth screams.

Elizabeth – covered in blood, calls Dean. She’s shaky and asks him to come. Dean turns round and races to the gumbo shack and finds her sitting on the front steps, severely shaken. Dean goes inside and finds Martin with his throat slashed.

Sam arrives at Amelia’s gun drawn – but looking through the window she seems peaceful and happy with not!dead husband Don. Sam goes to a bar to drink instead and calls the number of Amelia on the phone – which goes through to Dean, one of the burner phones. Dean did it to get Sam to see Amelia and get him to back off. Sam refuses to listen to how Martin died – and just hangs up on Dean.

And then Amelia arrives to greet him and Sam gives her his terror face. Seriously – is that bad acting or is Amelia actually cthulu in disguise?

On the episode: I don’t see how it’s possible not to view Sam as a colossal arsehole. Considering how inattentive he has been about hunting, how reluctant and the times this season Dean has had to virtually drag him into the hunt, the fact that he’s gung ho about THIS vampire looks a lot like petty spite.

Less Sam, more Castiel. I have to say I’m not all that concerned about Benny. I don’t dislike the character but it won’t bother me if he is dead.

I also didn’t like the fact that mental illness is again used as a shot cut for violence and incompetence.

So we’re moving into the hiatus, time to review season 8 so far. I think it can be divided into 2 sections. BC (before Castiel) and AC (After Castiel). Before Castiel returned we had some of the direst, most awful filler episodes I’ve ever seen in 8 seasons of supernatural. We had some awesome clinging to the beginning with the tablet and Kevin and Linda Tran but it quickly reached the lowest point this show has ever reached with me. Episodes 3-7 (even with the very predictable Benny backstory) were just dull dull dull and more dull.

Inclusionwise – we have the Trans. And that’s pretty much it. No GBLT people (though, of course, lots of fodder for the slashers – so who needs actual inclusion, right?)  not many women and not a whole lot of POC

I do feel meta has only raised hints. We had Crowley, then he went away. We had Angels and Castiel, then they went away. There’s Benny lurking with his story and Amelia with hers and… that’s about it. And this mid-season hiatus? I thought the point was to be dramatic. I guessed it would be if I actually gave a damn about Amelia and Sam

And I just don’t know where they’re going with Sam and Dean. Conflict? Drifting apart? If they are, they’re doing it wrong because Sam is just looking worse and worse every week.