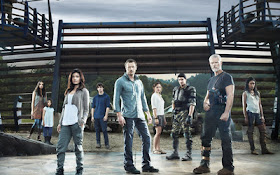 We open with an odd twist – it seems Mira, head of the Sixers, is using giant dragon flies to spy on Terra Nova.

Boylan, the naughty barman, is being held by Taylor and questioned about what he did for the Sixers, Boylan insisted that it was just trade – medical supplies, never information. He continues to claim ignorance about everything else – Taylor’s son, how Mira communicates with the future etc. Taylor leaves the prison – and turns on a siren, preventing Boylan from sleeping. He’s torturing him with sleep deprivation.

In a pleasant domestic scene, Elizabeth, Josh (who hasn’t been eaten), Maddie and Zoe are preparing for the harvest festival – the day they use to celebrate Taylor coming through the portal. They even have a Harvest Play in which Zoe has won the leading role as Taylor himself (almost like kids playing a nativity – yeaaa).

Josh, in a move that makes me not want to kill him for once, asks his dad to check on Boylan, since no-one has seen him since Taylor took him for interrogation (loyal lackey Jim disapproves of not using the Supreme Leader’s full title and further objects to the word “interrogate” don’t be silly, he’s just being questioned! Alone, without any oversight. That’s fiiiiine! Someone better start challenging this dictatorship, I’m running out of sarcasm). Jim agrees after making it clear that rule breaking just isn’t allowed (well, except by him. He’s special).

Taylor takes Jim to see Boylan where we find him not only sleep deprived but also zonked by the drugs Taylor gave him (Jim is concerned that Taylor may have given him a little too much – not the drugging, just the EXCESS drugging, you understand). Jim points out that Boylan did actually save Taylor’s life once – but Taylor thinks it’s all good, after all, even if he isn’t the spy he may give the real spy false confidence by holding Boylan. And he doesn’t need any silly grounds to hold people! Drugged and confused, Boylan babbles something about a secret buried under the pilgrim tree, something that will make it “all over for Taylor.”

The Pilgrim’s Tree is apparently the tree that Supreme Leader Taylor lived in when he first arrived (as such gets a special revered name – which is totally not creepy and not trying to form his own cult, honest). Jim, being the only person allowed to question the Supreme Leader, decides to go to this tree (apparently at night and beyond the fence, which are big no-nos) and, laughably start digging. This tree is huge – as in Redwood huge – and Jim just takes a spade and starts digging at some random point around its trunk. He gets lucky (surprise surprise) and unearths… a skull! (Dramatic music time!)

Jim takes the full skeleton back to Elizabeth to examine who says it’s a middle aged man with an arm missing at the elbow (though she doesn’t know if it was done before or after death or whether it was animal activity. It has to be said, she’s not the most insightful of pathologists). She thinks he’s been dead for 4-6 years and he may have been shot – there’s a hole in one rib. He asks Elizabeth to do more investigating – without telling Taylor.

Jim tries to get more out of Boylan but Taylor hovering around makes it difficult and Jim has to make excuses. And at the Worship-the-Supreme-Leader play with the kids, one of the soldiers smacks Mira’s spy-dragonfly and Maddy notices it has a microchip on its leg. Taking the chip to Malcolm and Taylor they realise the Sixers and their spy are using the dragon fly as a kind of carrier pigeon.

Meanwhile a Terra Nova patrol is ambushed by Mira and the Sixers. They injured soldiers return to upset Taylor, especially as Washington points out that she put together the team after Taylor locked up Boylan – he can’t have leaked the information but Mira clearly knew all the details of the patrol. Taylor agrees to let Boylan go (don’t mind the torture and drugging, bygones!)

Elizabeth continues her investigate the dead man and pulls up a mystery – not only is his DNA not logged in any pilgrimage, but the special molecular imprinting time travel causes shows he arrived between the second and third pilgrimages – when pilgrimages are supposed to be the only way to travel back in time.

Jim goes to see the newly released Boylan in his destroyed bar to question him about the body. After threatening him with a claim that he confessed to killing the man, Boylan tells Jim that he helped Taylor bury the body 5 years ago. He came across Taylor standing over the body when Boylan, then in the military, was on patrol. Taylor blame it on his son, Lucas, and that’s how the man got through the portal – it’s also the last time he saw Lucas Taylor.

To complicate matters, Malcom is curious about this autopsy going on in his lab and despite Elizabeth’s angry protestations (what business is it of yours that I’m poking random corpses in your lab!? Honestly, you’re so nosy!)  he tells Taylor. Jim passes off learning about the body as an anonymous note.

Jim and Elizabeth worry about how they can investigate if Taylor suspects them but they’re interrupted by an incredibly ironic speech about justice and freedom by Zoe in her role as Taylor in the upcoming praise-the-supreme-leader-cult play which makes him all thoughtful.

Malcolm, meanwhile has identified that the carrier-dragon fly tracks sounds and he has healed the little bug and put a tracking chip on it. They – Taylor, Malcolm, Washington and Reynolds (who was in the ambush earlier) can then chase it to the spy while everyone else is busy at the Taylor-Worship Festival. But at the festival, Elizabeth and Jim notice that the kid playing General Philbrick – the man who sent Taylor over – only had one arm and theorise he could be the body. Which is when the carrier dragon fly enters the Shannon house – and Taylor has Jim arrested as the Sixer spy.

In prison Taylor makes it clear he thinks there could be a natural explanation for the dragonfly going to the Shannon house – if Jim co-operates. Jim interprets that as “drop the case and you go free” and refuses. He asks Taylor why he killed General Philbrick and Taylor says if he didn’t, the general would have killed him.

Time for some exposition. The general had been sent by the same people who sent the Sixers, people who didn’t view Terra Nova as a second chance but as another source of resources. His son, Lucas, arrived on the Second Pilgrimage and was working on a way to make the portal go both ways so the resources can be exploited. Taylor destroyed his work and Lucas hated him forever since then. Lucas left and summoned the General through the portal to relieve Taylor of his command – he refused and killed the general in self-defence and banished his son for being a traitor against Terra Nova (meaning him, the Supreme Leader, of course).

The writing on the rocks we’ve been seeing has been Lucas writing his calculations for Taylor to see, taunting him. And Taylor has kept the whole thing secret (including the body) for the people of Terra Nova’s own good – as decided by him, of course. Having told his dramatic story and how Taylor has to stand alone for the good of all (hey saviour and martyr complex as well!) And of course Jim is determined to fight at Taylor’s side (see, he’s an amazing cop, someone admits to killing someone and says it’s self-defence? Good enough for Jim!)

Taylor makes up an excuse for Washington, Elizabeth and Malcolm. Malcolm finds it highly doubtful and accuses Taylor of planting the emitter in Jim’s house, Taylor all but admits it and tells him to go enjoy the party. Jim explains everything to Elizabeth

Everyone gets to enjoying the festival and Taylor makes a big “we’re all in this together” (he misses off the “or else” there) speech and everyone cheers the Supreme Leader as he basks in the glow of the fireworks – which are watched, at a distance, by Lucas.

Ok… so we have Commander Taylor, founder of the colony. We’ve seen before how they have no justice system at all – people are banished (effectively killed) on his say so alone and he has no democracy  nor any real administration beyond his commands and his servants. He now engages in torture of prisoners (and arbitrary arrest because he, of course, has no justice system). And to top it all off they have a Terra Nova wide holiday in his honour…  Why do they even call it Harvest Festival? Why not just call it “Supreme Leader Taylor Day”? They even have a fake nativity with a kid playing Taylor as the lead!

The fact the Sixers are equally unpleasant doesn’t make Taylor any palatable. On one side you’ve got corporate marauders seeking to strip the world of its resources, on the other you have a dictatorship with no pretence of justice, democracy or freedom and a dictator who is happy to kill, hide bodies, throw people out to the dinosaurs and torture on his say-so alone and is now trying to build his own cult of personality. And Jim’s there to be a loyal acolyte? Ugh. Let dinosaurs eat the lot of them.