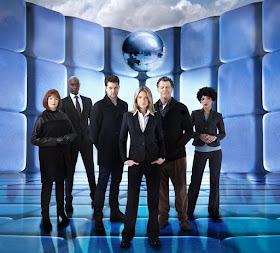 Donald shows his former co observor the trigger that he needs and says that apparently his trigger has lost its charge.  The observer points out that if Donald's plan is successful, they will fail to exist.  Donald believes that if they are not successful, the humans will die.  Apparently, Donald and August lost control when they started feeling emotions.  Donald reminds him that they were not told anything about the mission when it was first assigned. The observer says that for the people of this era that this their destiny and Donald argues back that destiny can be changed, even if it requires sacrifice.  Donald adds that he took a risk coming there because he believes the people of this era deserve to survive

In the van, Walter is yelling at Anya about what he needs. Peter gets a call from Broyles who says he is going to get a few things and then meet up with him.  While Broyles is gone, Windmark has a loyalist going over his car.  They are somehow able to hear the conversation Broyles had with Peter.  Windmark enters Broyles' office and says that he would like a word with him.  Windmark tells Broyles about the security breach and the loss of Michael.  Windmark says that he has heard whispers that the Dove is among them.  Broyles has an excellent poker face and gives absolutely nothing away.  Windmark stands and says he does not want to keep Broyles from his duties before leaving.

Broyles calls Olivia to say that he is on his way but he realises that he is being followed.  Broyles tells her that he will drive around but that they don't have much time because when he is captured the observers will read him. Olivia says that they will rescue him but Broyles tells her to focus on the plan and then hangs up.

Peter pulls a syringe out of the amber along with another tape which is addressed to him.  Peter puts in the tape and it is Walter talking about a letter he sent Peter.  Walter is telling Peter that he will never see him again because it had to be this way to secure the future of their humanity.  Walter admits that the syringe is an inoculation for time travel and that he is taking Michael into the future.  Peter asks if it has to be this way and Walter replies that he and the boy will become a paradox and that they will be deleted at the moment of the invasion. Walter tells Peter that he knows that this is what he is supposed to do and that he wants to give Peter his life back.  They both cry and hug each other and Walter says, "you are my favorite thing Peter, my very favorite thing." While all this is happening, Michael is watching closely.


Astrid and Olivia show up at the apartment and find the observer that Donald went to see dead. They overtake a loyalist and ask what happened to the part.  The part is handed to Windmark and he learns that the Fringe team intends to reset time.

Broyles stops the car in a tunnel and makes a run for it.  He gets into a stairwell but he does not get very far before he is stopped by an observer.

At the lab, Donald says that without the part they cannot open the worm hole.  Olivia goes to see Michael and tells him that she needs his help and asks what she should do next.  Michael puts his finger to his lip. Astrid asks about a shipping lane and Walter says that if they go to a shipping lane, everything would work as planned. The next shipping lane is opening tomorrow morning in New York.

Anil calls Olivia and tells her that Broyles has been captured.  Olivia says that the plan is happening tomorrow morning and that there is one other thing they need first. Olivia leaves to start loading the car and Astrid pulls Walter aside and takes him into the amber.  Walter is pleased to see his cow Gene.  Walter hugs Astrid and says, "you've always known how to soothe me."  Astrid does not know about the plan and says that when this is over they will drink strawberry milkshakes. As she is leaving, Walter actually calls Astrid by her name and says that it's a beautiful name.

Broyles is strapped to a chair and Windmark tells him that before the invaders arrived they sent a team of 12 and that this team succumbed to irrational emotions.  Windmark believes that they were infected.  Windmark tells Broyles that he feels something as well - hate.  Broyles replies, "the feeling is mutual." Windmark starts to read Broyles' mind.

Olivia and Peter are in the van and he hands Olivia her bullet necklace and says that they are going to have Etta back and that nothing else matters. Peter and Olivia then head into a building put gas masks on and dump a chemical into an air intake vent.

Donald and Walter are in the lab and Donald says that he gave himself the last inoculation and that he plans to go forward with Michael. Donald says that 20 years ago when he agreed to let Walter take Michael that he didn't have the feelings that he does today.  Donald says that when he saw Walter and Peter and what Peter meant to him, then he understood what his feelings for Michael were.  Donald says that he cannot communicate with Michael in the traditional ways, but when he takes his hand and leads him into the worm hole that Michael will know he loves him.  Donald adds that it is not about fate, but about changing fate, hope and protecting their children.

Windmark is trying to push into Broyles' mind but Broyles continues to resist.  Windmark picks up Broyles saying, "they are in the lab," before the alarms start going off.  Windmark walks into the hall and see gas coming in his direction and so evacuates.  The gas is killing loyalists and observers alike.  Olivia checks the security tape and sees that Broyles is strapped to a chair.  Broyles survived because he was in a room with no ventilation.

Donald, Michael and Peter are in a van, when Astrid gets a call saying that they got the cube they needed.  Peter, Olivia and Broyles arrive and Olivia tells Anya that they are in position.  They drive through a blockade following a truck.  Olivia orders Michael to stay down, as the rest of the team exits the van and starts to assemble the device. Donald gets the wormhole open but  Windmark has his hands on Michael.  Donald lunges at Windmark and they begin to fight as Michael backs away.  Windmark grabs Olivia and throws her and she lands next to her necklace.  The power starts to shut down around them and Olivia uses her powers to squish Windmark between two vehicles.  Michael and Olivia make eye contact and once again, Michael puts a finger to his mouth.

Michael and Donald run towards the wormhole but Donald is shot and falls to the ground.  Michael pulls out the music box and it plays Greensleeves.  Walter walks over and extends his hand to Michael. He takes one last look at Peter, who whispers, "I love you dad," and the two walk into the wormhole.

Olivia and Peter return to that day in the park with Etta.  Peter calls to Etta and she comes running.  When they arrive home, Peter gets a letter from Walter and it's a picture of a tulip.

Wow, I cannot believe that after five seasons Fringe is over.  These last two episodes really helped to make up for a horrible fifth season.  You had to be heartless not to tear up when Walter told Peter that he is his favorite thing.  As much as Fringe was about science fiction and odd events, it was also about the relationship between Walter and Peter.  When they first reunited, Peter wanted very little to do with Walter and over time, he learned to love and respect his father.

Also, who didn't love Windmark being smashed between two vehicles? Yeah, he had that coming.  Also loved that when Windmark admitted to hating humanity, Broyles response was that it was mutual.  I am really glad that Broyles survived.  It would have been too much to lose him after losing Nina earlier in the season.

I wasn't pleased with the conversation between Astrid and Walter mainly because it came down to him acknowledging her role as his caretaker and finally remembering her correct name.  From start to finish, the character of Astrid has been short changed by Fringe.  Though she is the one who came up with the idea of the shipping lanes, it saddened me that no one ever acknowledged exactly how much she gave to the team besides keep Walter on a short leash.

The series finally was epic because it was filled with both emotion and action.  I think it actually gave us the very best of what Fringe has come to be over the last five years.  Though I was largely disappointed with this season, these last two episodes reminded me of why Fringe became a friday night staple in my home and why I am going to miss it.