City of Promise by Dawn Prough 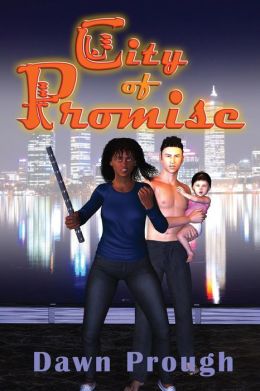 City of Promise is set in the year 2063.  Humanity is aware that they share the planet with vampires and instead of cowering in fear, humans are actively hunting vampires down and killing them.  There is a tiny vampire population left and they reside in the metropolis of Gideon.  Gideon is "built on pillars rising from the ocean on the Atlantic ridge," and is governed by scientists. The laws governing Gideon squarely favour humans and vampires live as second-class citizens.  Misty Suval lives in government housing unit and obtains blood through Gideon's work for blood program.  Diving deep into the ocean to do maintenance work for Gideon, Misty stumbles across a dead body and from that moment on, her life is destined to change.  When she meets an injured Li and brings home for the day, she does not realise that her decision to shelter this human will mean dragging her into the underworld of Gideon.

Many of the characters in City of Promise are of colour and this is something I greatly appreciated because erasure is far too common in this genre. Though the world Prough created was multi-racial, none of the characters experienced any form of oppression based in their race.  The only oppression discussed in City of Promise is that which is aimed at vampires. The problem with this is that unlike real marginalized people, humanity has every reason to attempt to control vampires - we are after all their food.  Even a futuristic setting is not enough to justify the erasure of the oppression that marginalized people face, to instead make a false oppression so central to the plot.

Despite the unique setting, Prough still fell prey to the dead parents trope.  We don't know anything really about Misty's human family, but we do know that her vampire sires are dead.  In many ways, their death seemed to be the only way in which Misty's character expressed any depth.  Beyond missing her dead sires, and Misty's vampire instincts, she really is an empty character.  I did however like Misty's comfort with her body and her absolute refusal to starve herself in order to loose a couple of dress sizes.  Misty is fit but she is not model skinny and I like that an average size protagonist is comfortable in the skin that she is in.


I also was pleased that Misty went out of her way to point out Li's ridiculous feelings about gender roles.  Being a man, clearly Li liked to feel in control, but being a vampire means that Misty has superior strength and speed.  Every time he would balk about her taking the lead, she would roll her eyes and comment about the ridiculousness of his resistance.  For much of City of Promise, Misty spent her time wondering about her attraction to Li because with the exception of a few people, Misty largely sees humans as food.  Honestly, this went on for longer than necessary.

There were times when I felt as though City of Promise really wasn't heading anywhere.  I wasn't continually bored enough to put down the book and clean the tile grout but it wasn't exactly engaging either.  It simply felt like the story was floating along without real direction and would never get to the climax.  When the moment did finally come, the fight scene bored me to tears and I actually struggled to read the last ten pages of this book.

The sad part about this is that all of the elements are there to make City of Promise a great story but something was missing.  I can't even really put my finger on exactly what it was.  A good grabs you right away and forces you to get lost in the story but City of Promise, much like it's name, promised something good but just fell short of delivering.

The structure was however good enough for me to be at least mildly curious about a second book in the series because the bare bones of this City of Promise were absolutely strong.  Now that the world building has been completed and we have a strong sense of vampire culture, Prough is free to tell an interesting tale and develop the characters she has given life to.

A copy of this book was provided by the publisher.