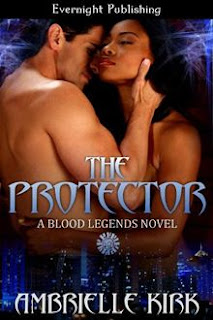 Mona has a normal, successful driven life as a doctor – she’s ambitious, a workaholic and very dedicated; raised by her Pops a little unorthodoxly with a lot of weapons training, but leading a normal life nevertheless.

Until her Pope is killed – by vampires no less. And, more to their shock, she kills them all, leading her with few leads as to who or what killed the man who raised her. But the death is noticed by other parties, Hunter and Xander, ancient Mayan heroes and head of the Daywalking Werewolves and the Nightwalking Vampires who seek to claim the key from Pop’s body and are surprised to see this unknown doctor hanging around. Even more so when she nearly chases  a werewolf into the ground demanding who he is and what he’s doing at her house.

Mona quickly learns that she’s far different from she’d imagined, and that Pops was keeping many secrets. She has the power to save the world from the underworld, aided by the vampires and the werewolves, or claiming that power and ruling them all.

Then there’s Xander and Hunter themselves, attractive men who are both extremely interested in Mona – especially since she needs a mate.

I think this book had a major problem with pacing and early dumping. We’re really thrown in at the deep end, there are werewolves and vampires and daysiders and nightsiders and protectors and demons and rogues and some of them may be the same and some may not be and there’s magic and some may be subgroups and there’s Mayan gods and something involving a Japanese clan and and and – and I had no idea. For far too long reading this book I was guessing at too much, there was too much introduced that was touched upon but had no real explanation and I was floundering. On the plus side, all of this resolved by the end and by then I had a fairly solid idea of who all the allies where, more or less. But a much shakier feeling about who the bad guy was, exactly, what the key was and who this particular representative of the bad guy was – I’m making educated guesses on them but I’m not all that sure. But I get them impression I’m supposed to be sure – the protagonist and her allies all know, while I’m just moderately certain.

The story itself, once advanced was fast and exciting with no lag at all. It had lots of well written fight scenes and the action kept happening. If anything it was too fast and at times I felt like I was running to keep up, but I think this is something that was intended thematically rather than being a problem.

It has an excellent world setting as well. The Mayan gods and underworld are a unique addition – it’s interesting and rare to see an Urban Fantasy book that looks beyond the standard western myths and legends. The two brothers who co-opted the werewolves and the vampires – but not all of them is interesting though I’m still not sold on their antagonism, it feels like a bit of an insert to make the love triangle interesting. I’m not sure exactly how the Protectors and the big bad fits into it all but I have a rough sense of it and it does come together to be an excellently thought out world.

If I have a complaint with the story it’s that this is part of a series and it felt like we covered both Mona’s introduction to who and what she was and the supernatural in the same book we had them confront and defeat the big bad. I think I would have preferred a story more about Mona’s introduction without it feeling rushed and ended with her confronting the rogues and avenging her Pops.

The book could also have used a little editing. There are some malapropisms there but mainly we just have a few paragraphs that are long winded, repetitive and just a little too awkward. I feel almost like at times there’s an attempt to use elaborate or evocative language that falls kind of flat and just feels very stilted.

Mona has many strengths in terms of capacity, and martial prowess. She’s also determined to do her own thing on her terms to some degree, even when completely out of her depth, she doesn’t let either Xander or Hunter dictate to her. She pursues a relationship they both say is forbidden, she goes where Xander and Hunter expressly tell her not to, she refuses to fit with traditions she doesn’t agree with or finds abhorrent and she outright calls them out. She also refuses to be put on a pedestal as a delicate, innocent woman who needs protection and outright refuses to be left out of the fighting and let the menfolk fight her battles for her.

These are the good points.

On the downside we have an extremely fast, insta-attraction, insta-love relationship. And Mona is a 28 year old virgin (I never understand why there’s a need to pair thousand year old men who have shagged a gazillion women with virginal or very inexperienced women – it always feels skeevy to me) who, nevertheless, gives awesome oral sex because of her “woman’s instinct”.

Then there’s werewolf culture – why is it that urban fantasy lies to pair werewolves with the worst possible alphamale rape culture possible? Women are expected to choose a mate for “protection.” What do they need protecting from? Well it’s not made clear – but their women go into Heat and must mate – oh it’s not rape they protest. They can always choose their mate before hand – or have a man choose them. This is somehow not rape. If she doesn’t want a mate at all she can refuse to surrender and fight him off, even kill him then she’s free to be without a mate for another year when she has to violently fight off rape again. These are the words of someone trying to defend this “tradition” to Mona who makes it clear she won’t be having any part of that –which is great for her, not so much for the other women.

We also have a moment when Hunter is irritated with Starla, his “companion” for “giving up the goodies” with other men too often, while referring to his copious lovers in the same thought process.

Then there’s the actual women beyond Mona. We have one, one decent, good woman who is also a fighter. She dies. Then there’s a vampire woman who dislikes Mona on first sight and a werewolf woman who loathes Mona, calls her nasty names and betrays them all to the bad guys.

The language Xander and Hunter us isn’t great either – lots of submission with a side order of “you know how women are.”

We don’t have any GBLT characters in this book. We do have a wide range of POC, in fact, POC greatly out number white people in this book and both the protagonist and her love interests are POC. Because there are so many male POC they fit every role and have a variety of attitudes and behaviours and character traits that defy stereotype. Several of them carry some level of their culture and history, but most are more “generic American” insofar as it’s possible to tell in a war against demons lead by vampires and werewolves. We do have several indications of their backstories and certainly the Mayan brothers carry their history with them to a great extent.

In all, this book has some incredible elements. It has a rich world that draws on Mayan mythology which is something we rarely see. We have a good protagonist with a lot of agency, strength and layers who won’t be dictated to and isn’t a spunky agent either. We have an exciting and interesting story with lots of battles and epic confrontations and world shattering consequences. Unfortunately we also have a rather standard love triangle. Supernatural brothers who don’t like each other, a forbidden love, both men competing for the same woman, she intrigued by both of them despite hardly knowing either of them. It takes up a substantial part of the book and it really doesn’t draw me in. But then, I am working with a severe love triangle fatigue here, so your mileage may vary.