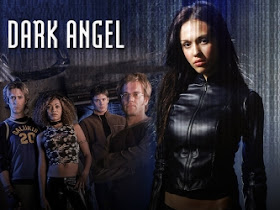 Let’s begin the episode with a slow pan of Max’s legs. I think the excuse this time is to show that she’s primping (you could show her fancy clothes rather than skipping them and focusing on legs and lips). She is going on a mission for Logan to get close to Douggie an accountant for a crime syndicate. There follow lots of corny mafia-esque wise guy slang that tells me Sopranos was big when this episode was on.

Anyway, this accountant Dougie knows the identity of the big boss man who always wears a disguise in public, giving Eyes Only chance to expose him.

To a fancy restaurant where Max plays stupid with a group of criminals who praise the pulse for increasing corruption and reducing oversight, allowing the mob to stage a massive come back. And we learn that Dougie also has narcolepsy, causing him to fall to sleep at odd times, and a girlfriend called Mia who the boss doesn’t want around Dougie – and who Dougie drives off to please his peers.

As Mia leaves the table she talks to one of the waiters – who then spills the drink he’s carrying down the back of Max’s dress. She calms down the angry mobsters and goes to the bathroom to freshen up. There she meets Mia who asks her all about herself with fuzzy eye effects. And Max tells her everything – not just being undercover but also being a Manticore transgenic. Mia laughs in girlish glee and says that she’s a transgenic as well, psy-ops. Mia asks for Eyes Only secret identity but even under mind control Max refuses. Mia tells her to just forget about Dougie and forget they had the conversation just go home and rest.

The next day max sees Logan and he’s irritated that she didn’t answer his calls and didn’t check in – and surprised that she went, a drink was spilled and she just went home. Even more surprised that she slept for 4 hours – when Max never sleeps. Max objects to his criticisms and says she’ll go again.

At Jam Pony Normal tries to convince Alec to return to cage fighting and Mia comes in looking for a job. Alec recognises her from Manticore since he was sent to psy-ops for evaluation. With the power for telecoersion (he rattles off a laundry list of abilities suggesting Manticore had telekinetic as well) – mind control. Which she promptly uses on Alec to make him forget her. And the same powers on Normal to make him hire her as a dispatcher.

At the club Max rants about Logan to Cindy before Logan himself shows up. He wants to take another run at Dougie and she’s not happy about not getting an apology. Alec and Mia at the bar talk and Mia uses her powers to make him think that max and Logan are sweet together and that Logan is admirable (not boring) and force some awkward hugging which I think is meant to be comic (oooh forced to men to hug. How hilarious). She asks Logan about his relationship with Max which leads to the virus, to Manticore – and to him being Eyes Only.

At work the next day Mia woo-woos Alec into taking up cage fighting again in time for a big special fight. And Mia’s messing makes Normal confess to a full contact Roman Gladiator slave dream he had about Alec (oh is this a theme? Because that’s 2 times desperate jokes about straight men touching each other have been used). Max returns to work and Mia woo-woos her again not to go after Dougie and to go to Crash instead. While there there’s an Eyes Only broadcast aimed at the mob – which confuses Max because it claims to know his identity. More it warns the boss that one of his lieutenants is ripping him off. Why make such an odd broadcast - Mia of course

At Crash Sketchy tries to give an opportunity, speaking about mutants – for Mia to attempt to provide a scientific explanation to her woo-woo. It’s silly and eye-roll worthy that they’re even trying. She also convinces Alec to go home and rest before the fight since she’s betting a lot of money on him.

Logan and Max meet and a random reminder from Original Cindy jogs Max’s memory of first meeting Mia – making them realise something’s up. She follows Mia to her meeting with Dougie – where he is panicking because he thinks the boss has discovered him messing with the books due to Eyes Only’s hack. She reassures him and again pushes him to leave the criminal life. He can’t believe she likes him (she’s much more conventionally attractive than him) and gives her the $5,000 she asks for to use on a “sure thing” (Alec’s fight) so he can prove his worth.

Mia realises Max is following and manages to sneak up on her and punch her from the scaffolding – making her drop her pager. Of course X series is a bit of a better fighter than Psy-ops and Max pins Mia against a pole – Mia explains her plan (Dougie proves his worth makes enough money that she and him can run away) and Max gets woo-wooed again

At work the next day Mia uses woo-woo to explain Max’s black eye as falling in the shower and hitting her eye on the shampoo caddy. While Dougie goes and explains his “sure thing” to his mafia stereotype boss who then threatens him with death if it doesn’t work out. Max meets Logan and the woo-woo fails again since she doesn’t have a shampoo caddy and Logan wants to know what happened when she followed Mia. She tells Logan that she’s psy-ops which Logan says “makes sense” HA! No, writers, you can’t just make something make sense by making your characters say it does. It doesn’t, it really really doesn’t.

Anyway this is when an overheard remark informs Max and Logan of Alec getting back in the ring which even he admits is ridiculous since it nearly got him caught last time; he can’t understand why he’s doing it. Max and Logan realise it’s Mia.

And choose to attend the cage fights (spotting the Mafiosi gang), Normal on the side lines, Mia and Dougie placing bets, Alec in the ring (taking fighters out with one punch). Max confronts Mia and gets woo-wooed again. Except this time Logan has a microphone on Max so while she gets woo-wooed, Logan hears every word giving them the full plan (with the added problem that if Dougie makes his boss a huge pile of cash he’ll never turn on him and expose him or get out of the life). They realise the boss must be there and call Matt Sung.

Max tries to convince Alec to throw the fight, ruining Dougie’s “sure thing” but Alec won’t – not seeing why Dougie, the crime boss et al is his problem. In response Max challenges him and becomes his new opponent. The gangsters put everything on Alec, of course. Naturally, Max wins (and somehow two transgenics fighting in a public boxing match manages to happen without either of them using super-human skills – or suspecting match fixing when a small guy takes down a huge number of muscle bound thugs like they were children and then a small woman takes him down. Also someone thinks that “curvaceous killer” is an appropriate fighting name for Max which is wrong on so many levels).

The goons are unhappy at losing all the money and stand to take Dougie on a little ride – at which point Logan arrives with matt Sung and tells Dougie to identify the big boss – it’s not like he’s going to survive if the boss is free. Dougie cracks and points out his boss in disguise (he’s dressed as a woman. Yes a man in a dress. Hilarious, really. That’s three, not impressed).  Boss is arrested

And Mia’s masterplan is revealed – she bet on Max at the end there so they have huge amounts of money. And she’d manipulated the whole situation to make Dougie turn on his boss because it was the only way Dougie would leave the life – and she couldn’t just woo-woo him into it because his narcolepsy comes with a side order of immunity to her abilities. This is also why she loves him, because he’s the one man she can’t just control with a thought.

One of the problems with recapping a series you watched long ago is that some episodes you remember. Sometimes that can be fun anticipation, others just loom over the whole season cackling “at some point you’re going to have to watch me!!!!”

This is one of those episodes.

Just as last week seemed to be a convoluted attempt to cash in on the popularity of vampires; this week some writer must have seen how popular Sopranos was and just leaped at the chance, however convoluted.

It could have been a good episode – going back to season 1 where we examine again the corruption and crime of the world after the pulse, the importance of Logan’s work and all the class issues that go with it. Instead it became a vehicle for woo-woo powers (powers that are so limitless as to make the majority of season 1 completely pointless) that don’t make sense and a whole load of Mafiosi tropes that have been done to death. Any opportunity to explore further was missed.

I’d be more impressed – and enjoy – a story of subtle manipulation if the manipulator didn’t go around mind controlling people – there’s no skill or finesse with special woo-woo. Frankly, she could have done as much by just woo-wooing 2 or 3 goons into believing Dougie was a traitor and then Dougie would have had to run anyway.

And Max had enough presence of mind to hide Logan’s identity but not her transgenic nature?