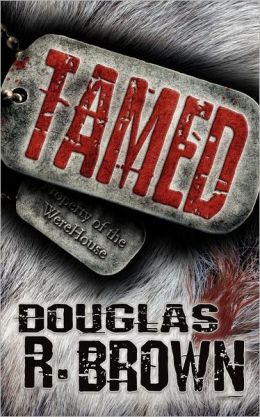 In Brown's world, not only are werewolves real, society has supposedly tamed them and turned them into pets.  One company is responsible for their training and distribution and this has made the owner Bernard, one very rich man.  When Christine Alt, a paramedic, responds to an emergency call, she learns that the hype about docile werewolves has been just that, hype, when she and her partner Billy, are attacked and their lives are changed forever.  Christine quickly goes from caring for people to running from Bernard's clean up crew, lead by Aidan.  Can she negotiate the change and live long enough for the world to learn about the evil that Bernard Henderson is up to in the name of profit?

I must admit that the concept behind this book thrilled me and for the most part, Brown was able to pull it off brilliantly.  One of the plot holes that quickly became a problem was the price of the werewolves. Each werewolf had a price tag of 250,000 dollars and immense upkeep expenses yet, they seemed absolutely ubiquitous.  Christine, the protagonist, did mention that she could not afford one on her salary as an EMT but everywhere she went, someone seemed to own one as a pet. Brown did not mention whether his world had far less economic stratification than the real world, but the price tag alone makes the commonality of werewolf ownership in Tamed, ridiculous.  Many people cannot afford a home for that price, let alone a pet.  Most of the people who did become werewolves were members of the underclass and therefore likely to go unnoticed when missing.  Brown also made a point about how many of the werewolves were actually homeless veterans.  These were great points to make regarding the vulnerability of the homeless and the neglect of veterans, which did help to balance his error of the commonality of werewolf ownership.

If Brown has simply executed the concept, it would have been a great book but for some reason, he felt the need to throw in a ridiculous romance.  Christine and Aidan actually know each other for a New York minute before they are declaring undying love for each other.  It's patently ridiculous and makes the relationship a complete and utter unnecessary distraction. It is so poorly written that I found myself sighing and rolling my eyes.  There is absolutely no basis for their declared love and it is made even more ridiculous because they meet after Aidan tries to kill Christine and she ends up saving his life. It makes sense that they would develop a connection but a declaration of love is far fetched at best.


Brown also fails when it comes to people of colour.  People of colour only appear at the very beginning of the Tamed and they are the original werewolves.  They are indigenous people to a very tiny island and their homes are described as primitive. Bernard has them slaughtered save one male, so that he can begin selling them.  Essentially, these people of colour are the savages which Bernard uses to infect the White characters with the werewolf virus.  Think about that for a minute. Brown writes, "Few civilized men had ever witnessed what Bernard now saw, and even fewer still lived to tell about it." Essentially people of colour are hunted and murdered for their savagery and then one - the first - is enslaved for over thirty years.  I would have preferred for Brown to simply erase people of colour, if this was the best representation he could come up with.  It's racist as hell, and is not helped by the fact that there is no counter to it.  It's one thing to portray racism and another to portray it without any indication that it's wrong. No one is there to save these indigenous creatures or empathize with their humanity, but the White werewolves get their humanity back and one even gets justice for what was done to him.  Where is the equality in this portrayal?

The protagonist in this story is Christine.  She is smart empathetic and thinks through her decisions before acting.  Christine does not wait around to be saved and is as active as all of the other characters in the story. She even saves her ridiculous love interest a few times.  This should have equaled great portrayal as far as gender is concerned but Christine is turned into a special snowflake simply be being the only female werewolf.  The only other female characters are the indigenous women who died early in the novel and Bearnard's wife, who is also killed.  Having one good female character surrounded by men is not inclusion and though Christine is actually the protagonist, her lone female status tokenizes her.

The ending was rather too convenient as well. Steven is a homeless man who is kidnapped off the streets and turned into a werewolf.  His chief regret is not being there for his daughter.  His memories of her and his desire to be a better man for her, are what help to hold onto his sanity.  The fact that he turns out to be Christine's father is ridiculous.  Brown needs to learn that not everything has to be wrapped into a neat little bow and that connections like this require more than a reader to suspend belief, but to enter and live in the Twilight Zone.  It screams of amateurishness. This is particularly sad because the basis of the plot itself is brilliant.  In the end, Brown let his own story down.  I will remember Tamed, as a book that should have been a knockout but instead was barely  mediocre.

Editors Note: A Copy of this book was provided by Netgalley
Renee at 3:00 PM
Share
‹
›
Home
View web version