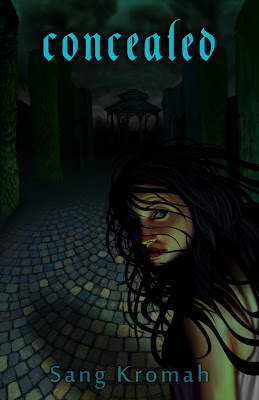 Bijou has always known she was different, with abilities and insights no-one else shared. Her nights were disturbed by weird and surreal dreams. Many times she thought she was losing her mind and she did her best to develop ways to cope with the impressions and senses that bombarded her

Her eccentric and dramatic grandmother seemed determined to shelter her and keep her from the world, but Bijou wishes a normal life and after a long battle, succeeds in being enrolled in school for the first time.

While it’s overwhelming, it’s not school that derails Bijou’s life – but the revelations of the people in it. As she increasingly sees the Others and her dreams become more vivid, more strange and clearer, her own nature is becoming known to those around her – and the secrets of her past, her family and her very nature are finally being revealed.

This book began with a slow, but intriguing start. We had a lot of foreshadowing, a lot of build up for this huge and powerful world and a slow gradual indication that Bijou was something well and truly special. It wasn’t a great start – it did drag, but the world setting seemed fascinatingly broad with a new slant – especially since we had an emphasis on Djinns rather than the usual stalwarts of western mythology.

Except then we hit the half way mark and the story knotted itself up, “djinn” was just used as “generic supernatural” in the same way other authors have used “fae” and then there were the characters.

The characters derailed this book for me. Or rather, character – because while there are a lot of other cast members we never really see them be developed, we know some things they’ve done, but no real sense of who they are as people. I think Bijou was the only realised character in this large cast.

She is, like so many Urban Fantasy protagonists, very very very angst laden. Part of this is from her powers which, like so many many many Urban Fantasy protagonists, she doesn’t like and just wants to be normal. Already my angst fatigue cries, but I can filter the angst into background noise if it is well done, well reasoned and she has some other, redeeming qualities.

Which is where we hit the problem. One of Bijou’s perennial complaints is that she’s lonely and isolated – one of the reasons she wants to go to school is to develop a social life and social skills. I’m wondering if the author is taking that into account in her depiction – because Bijou has no social skills at all. This adds to her loneliness because she make no effort to make friends at all! Seriously, she arrives, she has over half a dozen people trying so very hard to be her friend (alright there are 2  Mean Girls, but every high school setting HAS to have mean girls who hate her because she has attracted the interest of her man and is just too beautiful! It’s a rule, how else are we to know how beautiful she is without the adoration of men and the jealousy of women? Ugh) but she makes no effort at all, she zones out constantly when they talk to her and spends the entire time mooning after the hot guy Sebastian on the next table. Even then, there are at least 3 people who tolerate her enough to continue playing friends – she’s not nearly as friendless as she paints herself.

It doesn’t help that you can’t talk to Bijou. Any question you ask – anyone asks, Gigi, her grandmother, purported friends, anyone – is treated like an arduous inquisition. Bijou, you’ve just moved to the area, you’re trying to make new friends, of course they ask questions. It’s called getting to know someone, it’s how friends are made.  And the way she speaks to people is horrendous – she is beyond rude, she’s virtually rabid. She lashes out, has tantrums and snaps at people for little or no reason. When she is provoked, her response is grossly disproportionate to the offence given. The way she speaks to people – especially Gigi, the woman who raised her, long before we had any reason to doubt her, is staggering. She comes off as a spoiled, bad tempered child prone to tantrums and lashing out.

This is only exacerbated by her describing people in a way that their action doesn’t back up – she describes people as mean and cruel long before they’ve done anything cruel or mean (if they ever do). It’s like I’m supposed to assume negative interactions have occurred off-paper because we need an isolated, sad protagonist without the effort of developing one.

There are other issues with Bijou that just combine on top of these major flaws. Like her towering rage of random floods of tears (floods, literal floods). Or her complete inability to put 2 and 2 together and get 4. Or the fact she’s a worldly, experienced girl who speaks several languages and has lived in foreign countries, but is confounded and infuriated by an Australian accent.

This all would have combined to make it frustrating and annoying but readable – except she has one other desperate flaw. Sebastian. Her obsession with this man is overwhelming. I quite like the foundation they built for this super fast relationship – the dreams, the magical link which meant they knew each other and were connected – but that’s the only thing. Sebastian, after the truth is revealed, tells her again and again why they can’t be together – a simple case of it being a bad idea for a boydguard to get involved with their client – it’s bodyguarding 101. But Bijou still acts like it’s incomprehensible – I can understand her being frustrated by it but acting like it’s an alien concept?

But the break moment for me is how this obsession with Sebastian continued even when we finally reached the culmination of all that foreshadowing and magic was revealed. Bijou learned she wasn’t delusional, she did have powers – lots of powers, all the powers in fact! She learns that nearly everyone around her are magical and they have powers too. She learned she may have been a magical thief, she learned her mother was murdered, she learned she’s a super shiny Chosen One prophesised to be extra special super-duper saviour uber woman. She learns that her father’s alive nd her real grandmother’s right here. My gods so many revelations to dump on a poor girl, she must have so many questions! Where does she start?

Yes, Sebastian. And not “oh what powers do you have?” Or “Tell me about the prophecy/my magic/the world” but “WHY CAN WE NOT BE TOGETHER IT’S SO UNFAIR AND YOU HAVE A GIRLFRIEND AND I HATE HER HOW COULD YOU BE SO MEAAAAAAAAAAAAAN!”

At which point if this book had not been in my tablet I would have thrown it at a wall. Her entire world should be shook to its foundations, she has revelations on an epic, worldwide scale that also hits the very close to her personally – and she’s still stuck on whether a boy likes her or not.

But no, the camel continues to stagger on, back ruptured but not yet broken – until Niko arrives. Then that camel’s done for. Niko is, as far as she knows when he first arrives, evil. She has every reason to believe he is evil, an ally of the people who killed her mother and officially Up To No Good.  But he’s beautiful and they have a connection and behold a love triangle is born! Because we don’t have enough distraction from the actual major plot with one hot guy, we need another

As for the rest of the characters – they’re very undeveloped, largely names and vague descriptions. And there are a gazillion of them. Between her school friends, the people who come to stay with her and the people at Sebastian’s house, there are oodles of these people. They drop in and I’m left trying to remember who they are – look Moh’s here… Moh? And Robin and oh look he’s Roland again! Names – nothing but names these characters. She even randomly runs into more characters in grossly convoluted ways – like going on a date with Roland (random pointless side character who keeps taking up page room) to a bookshop and randomly running into 2 more characters who do special important stuff which we don’t get to focus on or develop because Bijou is still stuck on the Sebastian channel with occasional switches to the Niko channel.

Which also leads to where the story falls down. Despite a good start to the book, the story crashes off the rails with the revelation – all that careful, slow foreshadowing now drops into angst and love interest moping, lots of tantrums and then the nascent love triangle. Until towards the end of the book when the missing kids storyline takes over

What missing kids storyline? Well, I had to work to remember myself because these kids going missing was only really used as a backpoint to make Bijou even more sad and angsty and isolated (except for her loyal friends) and how mean everyone was. Then suddenly it’s dragged off to be made relevant, 2-3 side characters are promoted to being important now while I struggle to remember her names, and that becomes the big conclusion moment of the book, everything else left not so much hanging as teetering on the edge.

There were some elements that could have been so much more – Sedia and Gigi alone are complex and interesting characters with a lot of nuance and potential to them. I wanted to know what the special book of specialness was and I wanted to know the what and why about Bijou herself and I wanted her to develop some of her relationships. But all of it was woefully underworked, lost in waves of angst and pining and random distractions

Inclusionwise, we did have a large number of POC and Bijou herself is of Liberian ancestry, though her race isn’t readily apparent because of her multiple magical ancestors, meaning she ticks “other” on censuses and the like. Of course, while there are a number of POC, none of them are particularly developed – but then, nor is anyone else either. There are no GBLT characters. Most of the women aren’t sufficiently developed – but the girls at school are presented with a  lot of Mean Girl tropes except for those who are magically loyal to Bijou and I’ve already described Bijou herself.

Part of me thinks I should be giving this a DNF review – because at 80% I was done. I put it down and didn’t want to pick it up again, I was bored, I was tried and I was sick of the characters. But because I was on 80% I talked myself into reading the last 20% and even then I devolved into skimming, no longer caring about anything. And it says something that I’ve battled through a book that much and I just don’t care about the ending at all