The Reluctant Goddess by A. F .Firebird 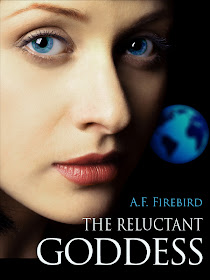 After millennia of having to keep a hands off approach to guiding humanity, Hector, servant of LIFE, is in place for an awe inspiring moment – the manifestation of Quan Yin, goddess of compassion, into a human form.

Of course, this isn’t an easy task. Not least of which is trying to get the human form that houses Quan Yin to realise who they actually are. After numerous failed attempts, he reaches Ellena, middle aged divorcee who runs a book store in a rural town in the south of England.

Posing as her dog, with his student, Boudica (yes, that Boudica) posing as Fluffy, her cat, they work to try and help Ellena realise her true nature – and the wonder of the world around her

This book was not remotely how I pictured it would be, not from the title, and I think it’s very much going to be a Marmite book, one that very much depends on your taste and preferences.

This isn’t an exciting book. It isn’t an adventure book. It isn’t a book with shiny magic or magnificent powers or some mortal woman suddenly running around throwing lightning bolts and declaring herself to be Athena.

This is a book about philosophy and ways of seeing the world. It’s a book about viewpoints and perspectives and transcendence and the nature of reality. In this book the main characters aren’t the goddess, but the people – Hector and Boudica, trying to encourage Elena, the goddess, to achieve her true potential. And she isn’t a goddess of lightening or the hunt or fire; she’s Quan Yin, a goddess of compassion, of mercy. She doesn’t perform miracles, but her very presence in the world will increase the level of love and compassion felt by all things, subtly changing reality in a variety of ways to generally elevate the world and humanity.

Hector and Boudica try to inspire Elena. They try to protect her against things that would both shake her world view of goodness, but also things that would close her down, narrow her, focus her more on the mundane than in the higher, the spiritual and the greater. At the same time we also have Elena’s fears and worries as she becomes more disconnected, worrying as the mundane world becomes less important to her and her ties become more fragile.

It’s also kind of like picking up a fantasy book and being force-fed a philosophy text book instead.

Because while it’s interesting, it isn’t exactly fun. And while it’s curious, it isn’t especially entertaining. I won’t say it’s boring by any stretch – it isn’t. But it’s like sitting in a lecture for a subject you find fairly interesting. It isn’t boring, it exercises your mind and you’re even learning something. But you’re not exactly having fun or being entertained and there’s probably things you’d rather be doing.

This isn’t just the content but also the result of a vast amount of infodumping by various characters, especially Hector. He is, after all, training a pupil which means lots of instruction, explanation of various things happening and, of course lectures. This is all further expositioned with the trial later in the book. There’s an awful lot of telling.

And a lot is left vague or to be extrapolated in one’s own head depending on your definition. What is actually supposed to change, what the end goal is, etc is all very much left wishy washy.

Beyond this, it leaves me with very little to say without spoilers or philosophical debate. The pacing is measured but slow, the text heavy on the exposition; we follow Elena’s mundane life, her history, interchanged with stories of previous attempts at incarnation. There’s a twist ending but there’s not enough concrete development or story to rest on for it to be a surprise or shock, more a side point, a new little angle to look at and a new wrinkle in the world building after which you continue reading.
There are numerous POC in the past attempts to incarnate Quan Yin and, of course, she is a Chinese goddess, but Elena is ultimately White as are most of the people around her, Hector and Boudica; we have past lives and the odd side spirit. The book also examines many of the atrocities of the world in unflinching detail and finds roots of the blame and human failing behind them – like AIDS being spread unchecked because people are ashamed to be tested and because the church is opposed vehemently to condom usage. Or the search for diamonds driving genocidal conflicts.

There’s also some challenge of both sexism and ageism with Elena’s own life as she witnesses the way people treat Sally and her own experiences with street harassment while, at the same time she is often ignored and discounted because she is a woman approaching 50.

The book and all the many many characters in it are all straight and the philosophy itself is extremely gender essentialist with talk of “female” and “male” energy and how they are referred to.

In all, it’s an interesting book. I can’t say much more about it than that. It’s certainly different and deeper than I imagined, but it’s definitely not going to be everyone’s favourite.

A copy of this book was provided by the author for review
Sparky at 12:00 PM
Share
‹
›
Home
View web version