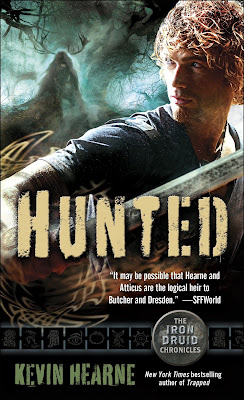 Following the dramatic events of the last book, Atticus, Granuaile and Oberon are on the run. Granuaile is a full druid now, but them disposing of Bacchus has infuriated the Olympians – both the Greeks and the Romans. With Faunus and Pan preventing them from reaching the Irish planes, they need to race across Europe – from Romania to Britain – chased by Diana and Artemis, goddesses of the Hunt. They’re only assured that some safety can be found in England – but it’s a long way to go on a road scattered with vampires, the machinations of the Olympians and who knows what other monsters

And none of this stops the brewing Ragnarok, or Loki rampaging around, hunting Atticus and causing general chaos. Atticus needs to prepare to help the Norse against Loki and Hel – but how can he do that with the Olympians hunting him across the continent?

I am very tired as I write this review. I am tired because I picked this book up to read yesterday evening and started reading. At 6:00am I could finally stop reading. I may or may not have killed anyone who tried to interrupt me during that time. I believe I would have been perfectly justified in doing so.

Not that I didn’t put it down in all that time. This book was an incredibly powerful, amazingly well written emotional rollercoaster. Within 5% of the book I yelled “no!” aloud in denial of what had just happened.

At another point in the book I put it down and walked away in some kind of denial – that maybe if I didn’t keep reading then I could pretend that it didn’t happen and could live in blissful ignorance.

There was a time when I considered booking a flight to Arizona, appearing outside of Kevin Hearne’s door, falling to my knees and wailing “WHYYYYYYYYYYYY?!” It would have been quite quite undignified.

It’s a testament to how strong a story is and how powerful the characters are that you can be this emotionally invested in them.

That same investment and emotional impact means it would be absolutely criminal to spoil this book, so I’m going to have to be really careful in this review.

I just loved so much of it. I love Atticus’s tone. I love his humour, I loves his unabashed joy in the world. I love his depth of knowledge that mean I believe Atticus’s 2000 year history far more than most ancient characters in the genre – even with his pop culture references and deep love of modern culture. I love how he can joke between modern internet references and still quite Shakespeare – and how he can do them both at once flawlessly and without the slightest jar. I love that, even with all that is at stake, he’s ultimately a mischievous trickster character every bit as much as Coyote. But there’s depth to him as well – his depression over what he has done, his fears for Granuaile and Oberon and the future of the world and the people who are hurt because of him all come through starkly. He manages to balance the ancient with the modern, the weighty with the light, the cheerful with the seriously awareness of what rests on his shoulders. Managing to fit all this in one character is difficult but really well done.

And Granuaile – for the first time we see in her head and it’s such a different headspace. She’s more passionate, more fiery and, oddly, more formal and poetic. She still takes things much more seriously than Atticus or, perhaps, hasn’t reached the point of being able to integrate her constant awe and respect for her role with the light heartedness that so characterises Atticus.  Her wording is almost purple at time – if the whole book was written like it I’d be seriously put off, but because it’s only occasional it strikes a strong contrast between her and Atticus’s mental tones. Granuaile is awed and overcome by what it means to be a druid, with it all so new to her – and she waxes poetic with it.

The story itself is excellently paced. It’s a roaring chase to escape the two hunter goddesses, hoping to delay them while making a hurried dash to safety, facing off against various forces along the way and with Odin spectating and taking bets with the Einherjar with Loki throwing a regular spanner in the works. It’s exciting, it’s funny, it’s often serious, it makes your blood fizz. There’s a real sense of consequences, we’ve already seen throughout the series that gods can and will die (except the Olympians which is why facing them is such a bother, they keep on coming and coming). It’s even poignant at times – powerfully, deeply, incredibly sad in ways I can’t talk about without spoiling – and that would be criminal. But it is an incredible emotional rollercoaster. It can mix the pougnance of heart rending loss, with the sheer joy of bribing Odin with girl scout cookies.

Oberon is still hilariously funny, immense fun – but even he brings a deeply, agonisingly sad moment.

Granuaile continues to come into her own – and Atticus respects her more and more (including continually correcting patriarchal gods who insist on referring to her as “his woman”). She’s smart, funny, capable – and able fighter who is tough and strong and learning – and she does learn and endure and show incredible courage and fortitude. She challenges old myths and legends – and the characters from them – for the way they treat women as objects to be traded or used. And she admires Diana and Artemis for being, to her, proof of a woman living and succeeding and finding happiness without men. Above all, she is Atticus’s equal, peer, even with his greater experience and skill and even with that she still grows – becoming more jaded and more ruthless and less naïve.

I’m a mythology lover anyway – but to see the Norse and the Irish and the Greco-Roman pantheons (and the subtle differences between the Greek and Roman pantheons) come together with added visits from the Russian and Finnish is just my geeky dream. Throw in a dramatically declaiming dwarf, sinister Svartalfar, totally-not-backlit Ljosalfar , some vampires, Herne the Hunter, Mantecore and other beasties and I just love this setting. I also quite like how unflinchingly everyone is treated – especially Zeus being presented as a rather disgusting pervert. Which, if you look at Greek mythology, is hardly inaccurate.

Sadly, and much as it pains me to level anything remotely approaching anything resembling criticism, there are no real characters outside of Granuaile and Atticus and the European pantheons so we have an all white cast, and pretty much an all straight cast since there’s no exploration of anything but straight sexuality.

I really cannot describe how much I loved this book. It was wonderfully, truly, awesomely great. After finally collapsing to sleep, feeling a little wrung out from its intensity, I woke up this morning (ish) with a desperate wish to re-read. And I never ever re-read books any more, I don’t have the time. This one I may make the exception for.