Under the Dome, Season 1, Episode 2: The Fire 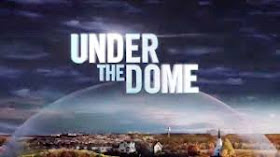 Get your flowcharts ready folks, it’s time for the next episode of Under the Dome and it’s 8 squillion characters

My gods the mere fact you have to have a “previously on Under the Dome” before the second episode tells you you have too much going on in the pilot!

Time to begin with a flashback to before the Dome went up – with Barbie beating Julie’s husband, the doctor. The doctor’s supposed to have something for Barbie’s boss – and he doesn’t. Barbie’s boss will be unhappy about this; this makes Barbie very unhappy indeed – and pretty violent. The doc thinks he has a different payment plan and draws a gun; but is foolish enough to let Barbie get close enough to knock it out of his hands. They fight again and Barbie loses his dogtags then draws his gun which then goes off. The doc is dead (is a “physician heal thyself” joke appropriate here?)

And I keep trying to not picture the Mattel doll beating a guy up. It’s a compelling mental image. I also think Barbie’s gun is supposed to be shown as going off “accidentally” so Barbie can later claim he isn’t a murderer – yeah you attack a guy, disarm him THEN pull a gun on him? Accident is a stretch

Barbie wakes up, apparently dreaming about the murder; probably because he’s sleeping in Julie’s house and pictures of the man he killed are staring at him. He and Julie discuss the dome and her being so happy he’s not all alone at the moment – and he discovers his dogtags are missing.

Julie tries to attract attention at the Dome, but the military people on the outside have clearly been told to ignore those trapped within; she blames them for the Dome, misplaced anger as much as anything else and decides to go to the radio station since if anyone’s getting in touch with the outside it’s them.

From there to Linda holding Duke’s body (they’re the police officers) – the other police assume he’s been shot, but his pacemaker exploded after getting too close to the Dome. Linda tells the other cops to make sure no-one goes near the Dome since it may be blowing up anything with batteries and she throws aside questions over who’s in charge – job first, hierarchy later.

To Joe (that’s the kid who was nearly squished by plane hitting the Dome) has recovered from his seizure and he and adopted sidekick Ben are going to map the Dome. Barbie joins him as he uses maths (I’m not even going to try to understand) to measure the extent and exactly position of the Dome. Joe is definitely hero-worshipping Barbie. As Joe and Ben continue around the Dome they find some military scientists spraying it with water to see if it comes through – it sprays against the Dome as if it were a sheet of glass. But Joe touches the Dome and his hand gets wet – only a little but some water comes through. I guess that means they won’t run out of air.

At the radio station Dodee tries to get a hold of the military signal from outside; while she and Phil snark about engineers feeling superior to DJs. They confirm again that the military is calling it a Dome – not just a wall, so helicopters can’t fly in either. Phil returns to the radio to give people something to listen to, confirming that all signals from outside are blocked.

At Rose’s Diner, Councillor Jim is introduced to Carolyn and Alice (the couple from LA) who are staying in Rose’s spare room. Jim reassures them how wonderful Chester Mill is usually (whyyy do I not believe him?) – which is when Linda tells him Duke is dead.

To the morgue, where we’re introduced to a new character, Rev. Coggins (yay, because we need more!) who is a bit overwhelmed by the number of bodies, especially since the cemetery is outside the Dome. Linda tries to ask Jim about the ominous things Duke wanted to warn her about but he ducks out. When Linda leaves Jim slams the Reverend into a wall and accuses him of “using our stuff, you’re as high as a kite.” Oooh drug dealing clerics and town fathers? Apparently Duke went along with it for “the good of Chester Mill” (because, y’know, drug dealing does a town good! There’s many a time I’ve been driving through quiet country towns and thought “what this place really needs is a meth lab”.) but Jim and the Rev weren’t so high minded.

Linda goes to the police station and finds Jim “cleaning up his mess” as he said to Rev – but he quickly pulls out Duke’s will as an excuse for his presence. Duke left everything to Linda – who he saw as a daughter. That certainly distracts tearful Linda. Leaving crying Linda Jim sends Rev to Duke’s house – Linda’s new house – to find out where his records about the nefarious propane are.

To Junior the depraved stalker and kidnapper and Angie his prisoner who is still stuck in his bunker and fighting tooth and nail to escape. He’s decided that Dome has scrambled Angie’s brains and that’s why she hates his kidnapping self now. Sure, it’s the Dome. He also blames Barbie because Angie talked to him – well, actually because Junior’s a depraved, obsessed stalker (and, of course, he’s not listening to any denials).

Julie arrives at the radio station and is wowed by Dodee’s brilliance – but listens to the military frequency and hears it’s a dome, not just a wall; she insists on telling everyone since they haven’t (Phil wanted to but Dodee thought it’d cause panic – besides they’re not a news station). She takes over the air and announces to everyone what’s happening; Phil is very good at ad lobbing in difficult situations. Listening in, Julie realises the military has no clue what the Dome is, so probably isn’t responsible

In Rose’s Diner, the news causes a wave of worry and mild panic including lots of people asking damn foolish questions of Linda because her uniform makes her Wikipedia (yes, I know it’s human instinct, but I still get to snark it). Linda does an amazing job of keeping them calm, then has to talk down her panicking police officers as well. We’re also introduced to her brother in law who is at least holding things together. The Rev offers his condolences again and proves to be an agile pick-pocket, grabbing her keys.

Barbie stocks up on cigarettes (while Norrie shoplifts a chocolate bar – that’s Carolyn and Alice’s daughter) since they’ll make good currency when they run out – and he is followed by Stalking, Kidnapping Junior. Barbie goes on to the… house? Shack? Cabin if I’m feeling particularly generous, where he killed the doctor. He finds the gun the doctor used – it’s empty, no bullets in it, it was probably just for show. He takes it and recovers his dogtags. Which is when Junior arrives and babbles about Angie and hits Barbie. Predictably, Junior gets his arse kicked and Barbie tells Junior to stay away and then leaves.

Rev Coggins goes to Duke’s old house, ransacks his office and finds the statements for the propane, hidden taped under a drawer. He burns them and drops the burning paper into the waste paper bin – which he then accidentally kicks into the curtains. Yeah, smooth criminal he is not. He tries to put it out by waving a jacket at the fire – which catches on fire. In panic he throws the burning jacket away and it lands in front of the door – which catches on fire. Seriously? Is this entire room covered in flammable chemicals or something? Now absolutely everything is on fire – floor, walls, things that would never ever burn, the window seems to just spontaneously combust blocking that way out as well.

The fire is spotted by Joe and Ben, still walking the perimeter where they find a dog and… legs. Severed legs. Whoever was walking the dog, Truman, was stood in the wrong place when the barrier went up. Which is when they see the smoke from the burning building and go check it out, taking the dog with them.

Linda and her brother-in-law nearly crash into the other police car driven by nearly-freaking out cop, Paul. He has a big stash of guns for them to use when the town descends into rioting and lawlessness. Ok, people are nervous but I don’t think anyone’s ready to riot – though they might if the cops start pointing heavy ordinance at them. Which is what he does – at Barbie as he walks by them in the woods. Which is when Linda is told about the fire – Paul writes it off, they have no fire department, but she calls in all available people. Paul snottily declares she’s not the boss (because he’s 5 apparently), she repeats her order and he obeys. Which pretty much means she is his boss, methinks. And she drafts Barbie to help – Barbie is much more sensible and doesn’t even try to argue.

Jim, listening to the police band, arrives seconds before Linda & co, cursing Coggins who he can hear crying for help inside. No-one has any idea what to do (and Jim hides that Coggins is inside) and Barbie organises people into getting garden hoses. Julie arrives to take photos but tells Barbie her worries – it hasn’t rained in weeks, if the fire spreads they’re stuck in the Dome – Barbie calls for bucket chains. Hearing Coggins inside, Linda heroicly charges in and drags him out – of course as soon as she gets to a minimum safe distance the propane tank explodes. I tell you people, it’s a RULE! The minute the hero runs away from anything that’s on fire, it WILL explode. It’s a law of Hollywood.

Fire continues to jump from the house to neighbouring properties. They manage to try and hold it back but while the house is burning they keep losing ground and the fire keeps spreading. Until Jim returns with a JCB and tears down the house. Without the house fire to keep feeding the others, it becomes controllable. Julie praises Barbie and sees his name on his dogtags – Dale Barbara. Can I call him Dale now? Though he tells her he left them over her bathroom mirror and she knows he didn’t.

Coggins will live (unless Jim strangles him anyway) and makes up a decent excuse for his presence – and Linda gets a round of applause from the town for her heroism, as does Jim who makes a big speech about unity. And Paul loses his shit, completely, rants about the Dome and draws a gun. He rants some more and turns and shoots the dome – one of the ricochets bounces off and hits Freddie, Linda’s brother-in-law, another cop. Barbie takes the chance to tackle Paul.

Back to the bunker were Junior tells Angie that Barbie is dead. She doesn’t believe it, doesn’t believe he’s capable of murder (I do – morally, definitely. In terms of competence? Hmmm… maybe not)

There are so many storylines and characters that it’s damn hard to recap. I’m doing what I try to do with Game of Thrones and group the characters rather than jerking constantly between them. But it’s a nuisance.

Military testing was too obvious and ridiculous an excuse for the Dome – apart from anything else, while rural Maine is indeed pretty out of the way, I’m sure there are more deserted spots to test your forcefield technology.

I still don’t know where to jump here. The show is so bloated with so much going on that I can’t really comment on anything in terms of inclusion. I think I can see who the dominant characters are, but there are so many and we’re only 2 episodes in and moving slowly. It just feels so huge. I remain… intrigued but not hooked. Curious but not massively interested.