Reign of Blood by Alexia Purdy 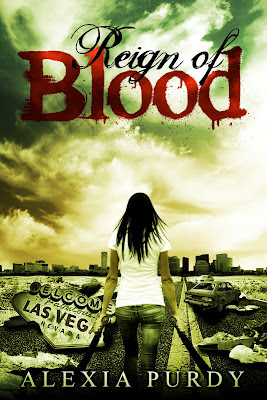 The world as we know it is over, civilisation has fallen, mankind is almost annihilated. In fact, April, her mother and her little brother, hiding in a bunker outside of Las Vegas, may be the last human beings on the planet. The city and the night has fallen to the vampires – monstrous, feral creatures that swarm in the cities and hide from the sun, giving brief respite in which April and her family can scavenge for supplies.

Until her family is taken from her and, in her quest to find her loved ones and the only other humans that are left, she stumbles onto a whole new type of vampire she never imagined existing.

A combination of a zombie apocalypse and a vampire story, this world has so much potential. Humans stalking through the slowly mouldering cities for supplies, avoiding dark places, knowing they have to return to safety by sun down. Watch out for movement in the shadows, stay where it’s sunny and if you see anything lurking in the darkness… don’t meet its gaze.

Is this not an awesome concept? I think I could very much love it. For some reason the idea of sinister marauding vampires taking over the city during the night is far scarier than zombies taking over everything all the time. Just that constant “get home before the sun goes down” pressure.

There’s also some interesting side musings – the usual things in a dystopian like missing luxuries and necessities but she also makes a point to talk about things like missing toilet paper – the basics we have every day but don’t consider luxuries but would surely miss. She also goes down an interesting path of considering things she doesn’t miss – like how her priorities change and she no longer has to concern herself with clothing or appearance –and then being plunged back into society and flailing to think about them.

We have the interesting contrast as well between April’s personal goals – her desperate need to reunite with her family, perhaps the last people on Earth – but also a, perhaps, higher goal to help the hybrids and be the saviour of an entire people. The balancing of the desperate personal need with, in some ways, the greater community good is a harsh and difficult contrast and choice to make.  And that’s before we get April’s very well presented trust issued (before the woo-woo romance anyway)

Unfortunately, there’s a lot of the writing I’m not a fan of. It’s very repetitive – we’re constantly told how hot or cold it is (and since the book is set in Las Vegas it’s not like there’s a lot of interesting weather options here). We’re told about vampires in buildings avoiding the sun – which is fair enough world building, but it doesn’t really need repeating. Or she tells us she needs to  clear out shops before stocking up on goods – even if we couldn’t have inferred that from her actions, we didn’t need to be repeatedly told

There’s also odd statements about that are pretty redundant – like her machete being perfect for close up fighting. It’s a machete, how else are you going to fight with it? Throw it? Also, some purpleness creeping in – like turning on her flashlight and it’s beam “caressing” what it illuminates. I feel quite cheated, no torch I have ever owned has caressed anything. And when a vampire grabs her it’s the “cold grip of death.”  And vampires don’t drain her blood – they “sucked my life’s elixir away”. One character manages to watch her with a look of contempt and respect on her face… what would that facial expression even look like?

And some of the dialogue is just… not great.

“You’re in the wrong place at the wrong time; I will make you pay for what you have done to my family.”

“I have been watching you, seeing what it is you seek.”

Yeah, not great. Seek? Unless you’re a D&D games master, who uses the word “seek” in daily conversation?

And there’s a huge wallop of info-dumping at the beginning of the book – showing us the world, April, her mother and brother and what they did in one big crammed telling-all-of-this; it felt like the author wasn’t interested and wanted to hurry to the main story so had one big dollop of info. Which is a shame, because there’s a lot here that could have been really interesting: Developing her contrast from normal teen to teen fascinated with weapons, from kid to adult way too soon – and the difficult dynamic with her mother who forgets how much she has grown up.  Developing her active lifestyle into weapon’s training, trying to keep her brother’s relative innocence, trying to make some kind of home in their bunker.

All of this could have been good, but it’s just squeezed in at the beginning and leaves me a little disconnected from the world and the characters. Particularly, April’s overriding motivation to save her family falls a little flat to me because I only buy into it because, hey, family. You save family. You love family. It is known. Any actual connection between April and her family is missing. It also adds a level of unreality to some of the world building – like April becoming the awesome fighter she is by watching lots of martial arts films… It’s just that all that potential I talked about at the beginning? It’s all completely missed! And we have things like April's mother conveniently finding the bunker, them going for a supply run and splitting up (yes, really) - like with the martial arts video, it feels like a really convoluted way to force the story to where the author wants it to go rather than developing it there

That same lack of development follows to the hybrid base - how does it run so effectively? How? Why? Other than the romance bonds (ugh) what other woo-woo is there? Why do the leaders feel the need barricade themselves from the general populace when they sleep? Why doesn't April ask any of these questions?

I also don’t like the romance. I don’t understand it, I don’t understand what it adds to the story, to the world or the plot line. It’s just there, taking up space because there simply must be a romance. On top of that we have mystical woo-woo bonding that strikes out of nowhere and causes them to fall so hopelessly in love that they leave any actual partners or spouses they already have. The idea that insta-lust “I just saw you and now we must hump” is totally more important than years of actually knowing a person and bonding with them. I hate the Love at First Woo-woo trope wherever it appears – it’s lazy. It’s an easy, convoluted way to force a romance when you can’t actually be bothered to write and develop an actual connection; behold woo-woo, romance box is now ticked! Now they can gasp their eternal, undying love for each other just as soon as they can remember each other's names...

But back round to some positives again: April holds her own and holds onto her priorities throughout – she wants her family rescuing. That is her goal – if she helps save the others as well, then fair enough – but her family will be rescued and she’s not changing from her primary goal. But, to counter that, while she talks a lot about finding her family she doesn't actually do an awful lot to reach that goal - she hangs around in the vampire hideout and waits for them to sort things out. Ok she can't exactly storm off against the bad guys on her own but shouldn't she be doing SOMETHING? Something other than sleep, eat and talk to convoluted forced love interest?

When she is challenged as an abomination and treated as helpless she responds with some very pointed violence (but even that is badly written - since she seems to be a helpless victim then flick a switch and pull out 8 levels of badass from somewhere. It's like "oh my god the vampire is being mean and going to bite me and he's so fast and strong, what am I going to do, what am I going to do, I'm so de- hey, wait, I'm a suprehuman killing machine! My bad, I totally forgot!"). Even when afraid and self-conscious she is determined and refuses to cower, back down or hide. And she’s not alone – all of the women depicted are strong and determined and equally passionate; they’re not friends with April (actually hostility is the norm as so often happens).

I won’t say they’re the most awesome depiction of women ever. In fact, April’s main strength revolves around her magical ability to slice and dice things and her special woo-woo that makes her extra good at the slicing and dicing, but there’s nothing bad here to point to either.

When to comes to other marginalised groups – it’s a dystopian, they don’t exist. Well, one of the guards at the enemy hive is Black. And foreign. And dies. That’s it. The Grim Darkness of the Future is, again, Straight and White.

This is a series that had a lot of potential. The world is still one that intrigues me and reading it it had a full sense of the creepy and menace that even the best written zombie apocalypse rarely manages. It’s that level of tension, of time running out, of having to hide that isn’t matched by shambling hordes of day walking zombie. And while I complain a lot about the writing, it must have got something right to really convey a sense of that tension and power. But the positives there are overwhelmed by some poor writing, a completely unnecessary love interest and sheer lack of development of the interesting elements to rush the story to where the author wanted to go.