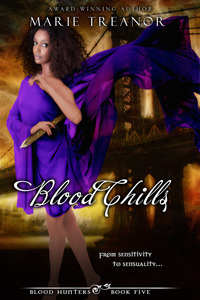 After fighting alongside of the ancient vampire Saloman and being present at the birth of his child, it's time for Cyn to return to her life in New York with her merry band of unsanctioned hunters. It's not long before Cyn's group is tasked to investigate the deaths of humans in her childhood neighbourhood. Though all of the evidence points to Bela, Cyn's instincts are telling her to trust the vampire and become his ally. The problem is that Bela wants more than her trust and though her mind rejects the possibility of being with a vampire, her body has other ideas.

Essentially, Blood Chills is a paranormal romance. The relationship follows the typical pattern of boy meets girl and they don't like each other, followed by the couple getting together before a misunderstanding drives them apart. Of course, the couple then has a reconciliation and the readers are treated to the exceedingly predictable HEA. I will, however, give Treanor credit for stretching out the romance between Cyn and Bella so that they were not declaring undying love after knowing each other for a ridiculously short period of time.

Though much of the series was fixated on the budding romance between Cyn and Bela, Treanor did manage to include an interesting story line. For a good section of the book, she managed to keep me guessing as to who the antagonist was and what his motivations were. As much as this is paranormal romance, the plot could have stood on it's own without it, particularly because Treanor continues to enlarge her world and relate more about vampire lore with each book.

That said, Blood Chills was still highly trope laden. Cyn is verbally clear on several occasions that she does not want to be touched but Bela, of course, ignores this because he can smell her lust.

The implication was clear and heated her tormented body unbearably.His lips, a curiously attractive half smile. On a murderous monster who'd almost killed her friend. Rudy could still die."You disgust me," she whispered.

He considered her as if he had no intention of removing himself in the foreseeable future."Not entirely true.Vampires can smell arousal,you know.  Yours is sweet and powerful. Like your blood."
"And humans are much, much more than chemical reactions.Get off me you self-satisfied prick"
He blinked, his lips parting in something close to shock.
Shit, now he's mad. So not clever, Cyn...
The vampire threw back his head and laughed.  The deep rumbling was oddly infectious and yet made her shiver for no reason she wanted to understand. But although he eased some of his weight off of her, he didn't release her hands.  Looked at in the right way- and she was pretty desperate her- this was a good thing. It meant he acknowledged that she could still damage him. (pg. 32-33)

Cyn rejects Bela for large sections of the book and he keeps pushing himself upon her until she finally gives in. This is supposed to be sexy? This is a supposed foundation for a HEA?  A man who thinks "no" simply means try harder until you get a yes? This is rape culture at it's finest and should never be mistaken for romance, or seduction. Cyn even goes as far as to try to kill Bela several times but he sees it as foreplay and certainly not rejection. More importantly, why does Bella consider that she should let go of her "free will" (pg 67) to engage in sex with Bela?  In the end, sex becomes something Bela does to Cyn and not something they do to pleasure each other; it's an act of dominance.


Cyn is also another in a long line of gently used protagonists to fall in love with an older more powerful being.


She'd never paid enough attention to her bodily urges.  Maybe that was the problem here.  There'd been the boy at school, before she even met Rudy.  That had been just plain icky, not to say sore.  It had put her off for years.  Then the sexy bad boy from the block, who'd never called after she'd given her all. She'd thought it was love, but she was just another notch in his belt.  Naivety had died quickly in Cyn, along with romantic notions.  She supposed she'd subsumed her natural sexual desires in the physical work of keeping fit and killing vampires. (pg 35)

Bela is charming and far more experienced than Cyn and, of course, he is hyper aware of  both the power imbalance and the differences in their lived experiences. Bela literally overwhelms Cyn, even as Cyn worries that, because of Bela's long life, he is sure to have had better lovers.

This is the first time in the Blood Hunters series that we have a protagonist of colour. The relationship between Bela and Cyn is interracial.  I was excited by this given that Cyn has never been more than a side character in the other novels. Unfortunately, she too often describes herself as not blonde. Discursively, this is problematic because this defines Cyn as simply not White. Treanor didn't really do much research into African-American culture and other than Cyn's concerns about gentrification, there were no cultural markers signifying her as WOC. Given the Whiteness of the preceding books, this is extremely problematic. Including a marginalized character without cultural markers is not racial inclusion. To  make matters worse, Will, the only other African-American character in this series, ends up being psychotic. Yeah, thanks for that.

It is worth noting that Will is also mentally ill. It is assumed that he is suffering from a form of PTSD. Instead of seeing Will in pain, trying to deal with his disability, Treanor turned him into a blood thirsty psychotic who finds joy in killing. Yes, another trope. People living with mental illness are far more likely to be a danger to themselves than others, quite the opposite of the treatment the media chooses to give them.

This is book five in this series and I am still waiting on good GLBT inclusion. The only reference to even the remote possibility of a same sex interaction Treanor bothered to include, was Bela informing Markus that he did not visit his apartment to seduce him. Bela could be read as bisexual; however, in the following passage, Bela makes it clear that sex with men is nothing but an experiment and that his true sexual desires lies with women.


Alas, you're a handsome man, but I don''t swing that way.  Or at least, not very often," he added in the interest of the strict truth.  Immortality was long; all experience had to be embraced. ( pg 192-193)

The Blood Hunters series continues to disappoint me. Treanor created a fascinating world which is slowly developing with each new coupling she writes about. Humanity being on the cusp of discovering that vampires are real and how this will change this world is compelling. While I am not an avid fan of romance, the slow build between Bela and Cyn, at least made sense and was timely. What I continue to have a problem with is Treanor's absolute dependence on ridiculous tropes to tell her story.  Cyn didn't need to be gently used. Affirmative consent on the part of an empowered woman is sexy and Treanor certainly did not have to turn Bela into a sexually aggressive douchbag with the instincts of a sexual predator. Using woo-woo - his supernatural ability to smell her desire - is not only disgusting to picture, it's a cheap writers device. I always feel like Treanor is on the cusp of something great when I finish a book in her series. If only she would trust herself and the world that she has created to tell the story.