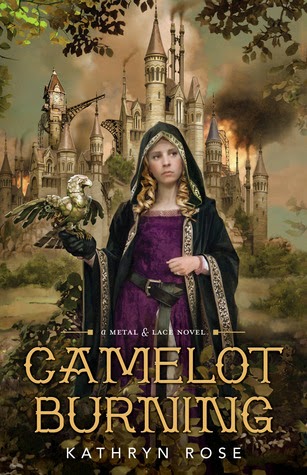 Vivienne is the Lady in Waiting for Guiniever, Arthur’s new bride and refugee from the cursed city of Lyonesse. She has to be proper, she as strict rules about how her future will be –and she’s not following any of them, sneaking out every night to study with the Machinist and ex-wizard, Merlin (who has a penchant for absinthe).

But when Morgan Le Fay, the king’s sister and destroyer of Lyonesse, comes to Camelot wielding forbidden magic, the whole city may be grateful for Vivienne’s tinkering and the old wizard’s inventions.

The premise of this book is excellent, a truly original retelling of Arthurian Legends in a Steampunk setting. A Camelot that has eschewed magic and turned instead to the wonders of alchemy and technology (which, admittedly, does some pretty magical things) and not just out of random prejudice – but out of a very real fear of what stealing magic does (and “stealing” is used for a reason – which adds to the richness and great potential for further stories in this world).

We have Merlin, a recovering magic user, still desperately feeling the pull of magic, the urge to use the power he has inked on his skin but trying to adhere to the strictures of the mechanical. It’s a really strong depiction of a man struggling with addiction – a good man, a strong man, a man who can even help people in the depths of his craving, but still a man who has to struggle every day with what he has lost and what he cannot have.

And we have Vivienne. Intelligent, secret apprentice to Merlin who is unwilling to let the strictures of class and gender (or her family’s expectations) dictate what she can or cannot do. She has no time for boorish knights regardless of their titles. She’s brave – and not just in the face of danger but also in the face of social embarrassment. She has her doubts, she isn’t perfect, she often needs confidence and there are times when her own personal dreams – desperate and impossible as they seem – overtake her to the exclusion of realising she’s needed here and now. And she’s not the only capable woman, Guinevere is good and kind, capable, brave and determined even when regarded with suspicion and outright derision.

While there are few POC, and the one there is a small role, there is an interesting dynamic of technology. Alchemy and machinery have been mastered in the Middle East, and Merlin, Vivienne and everyone else fully and freely acknowledges the Middle East’s superior knowledge, technology and skill. It’s a well needed reminder that when Western Europe was mired in its “dark ages”, the Islamic world was flourishing.

I also like how Arthurian legend has been used and blended into this Steampunk story – Guinevere and Lancelot, Modred, Morgan Le Fay – they’re all there, they all have elements of their original story, reworked into this original setting and plot line.

So… issues. Yes there are some. Firstly a complete absence of any GBLT people is an all-too-common problem. I’m also not sure there was a particular need for Vivienne to develop a romance with Marcus – it didn’t dominate the plot but it did feel overwrought and unnecessary in many places, especially considering the knightly oath of celibacy to give them proper star crossed pathos. Though Marcus, as the son of a serf, did give some good insights into class divide in this world.

And the writing wasn’t a perfect execution – just a little long winded and confused in places. In particular action and fight scenes completely lost me. There’s an epic battle at one point that goes on for pages and pages that gives me the strong impression of Vivienne largely standing around and watching and at least two occasions where a character I was sure just got killed was still fighting. I’m not sure if the fight was outside the castle, inside the castle, quite possibly floating above the castle – there was a moat and some platforms that apparently did stuff but I still have no real idea what – in the end I skimmed past it with a big “fight scene, people die” note.

It’s a relatively small point, but action does consume a lot of this book so it falling apart is a problem.

This is the first book in a series and I’m definitely curious to see where it goes from here, especially with the rather dramatic ending that I didn’t remotely predict. There’s so much more to see and a lot more of Vivienne’s character to grow and develop – I’m in, let’s see this develop.