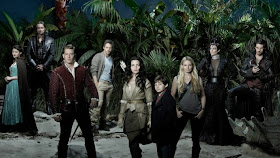 I think we open on David’s dream since he’s in the Enchanted forest, wearing olde timey clothing and teaching a ball gowned Emma how to dance – by which I mean dancing perfectly with her. It ends as a nightmare as dream Emma says she should have had all this – but didn’t get it because he failed her. Dream Emma is sucked into a portal saying “don’t fail the next one”.

So, daddy guilt. Apparently this was a dream before the enchanted sleep because he wakes with Snow telling him the news – and he looking all kinds of worried about it.

9 months later to the present and Storybrooke and brainstorming a way to find the Wicked Witch. First off, Regina insists that Henry needs a guard – and that guard is going to be her. While babysitting henry they talk about Emma, her boyfriend, New York – and the fact that Henry would like a larger family and that he’s not so foolish as to think Emma has come here just on a case.

The Wicked Witch, Zelina still has a rather unstable Rumplestiltskin prisoner – and controls him using his dagger which she got her hands on. Dagger or not, I still think there are safer pets to keep – like rattlesnakes. She shaves him while sharing an anecdote about her drunken father and his need to keep up appearances (if she does know how to shave she’d know that wavy bladed knife is going to be absolutely useless). Keeping up appearances is a sore subject for Zelina who, when not cursed, has bright green skin.

She goes to Rumple’s shop and while distracting Belle in the back, uses Rumple’s blood to break into his safe and steal something wizened and ugly.

At Regina’s office they examine for traces of Zelina and David finds Holly berries (which he recognises the taste of… which I wouldn’t advise because Holly is poisonous. So David regularly eats poisoned berries enough to recognise the taste?) which he happily knows where it grows – but Emma and Hook will go without him because David has to meet Mary Margaret’s new midwife (Zalina) which he isn’t happy about because of his baby angst.

Which calls for a flashback – to just after breaking into the castle last week; Charming sneaks into his stables where he hides his booze and Robin comments on his own illicit boozing. Charming talks about his fatherhood worries so Robin Hood tells him of a root you can chew to relieve your fears. Charming is quick and eager to enter the haunted forest to chew on the nice narcotic root and make him a better father.

He shows up for the meeting with Zelina who is just perfect and Mary Margaret loves her – but David is just a little more suspicious since she’s a complete stranger with no references they’re trusting. Zelina makes tea – and puts some of the root Robin just told us about in David’s drink (the root she stole from Rumple’s shop).

Flashback to David riding out and getting some of said same root back in the Enchanted Forest, when he hears a woman cry for help. He runs to her and finds a tower which he climbs – first some vines then a long braid of hair (that must hurt. Also why is this braid of hair completely slack in the tower, his weight put not tension on it at all?). There, surrounded by a lot lot lot more hair is Rapunzel. She came for the root as well to calm her fears about suddenly becoming the heir to her parent’s kingdom – but it didn’t work and now she can’t leave without a cloaked witch appearing

Which she does now…

Back to the present for lots of talk of feelings and praise for David’s sudden new fearlessness. (David is your brain on drugs, kids! And damn wouldn’t that be a deterrent?!) Having finished their conversation, David sets off to help Emma and Hook - taking his sword. And he is followed by the same robed figure as appeared in the flashback. It stalks him – and after calling Emma’s voicemail to let her know what he’s doing, he assumes the figure’s the witch and chases it.

Flashback to David refusing to leave Rapunzel and fighting the robed, teleporting figure, cut with the same fight in the present. He doesn’t do very well in either combat.

Meanwhile Hook and Emma avoid talking about the year Hook spent apart from everyone (he lies, Emma notices) and whether Emma was really going to marry a flying monkey. Hook takes hope in the fact Emma being heartbroken means she can fall in love. They find a farmhouse – which, I agree, is wonderfully ironic, and Emma wants to check out a storm cellar. Hook questions going into a hole of the unknown owned by a witch who already has flying monkeys. Emma sees sense and calls Regina (the Big Guns). But when calling she finds a voicemail from David

Gah, the cliché, oh the cliché! You face your fear and it is you? How many times has this been done?

Flashback to the past where the robed figure is Rapunzel and David explains to her about facing her fear (yup, cliché, told you). He yells at her about having to and she cuts her hair, dropping her fear to its death – which is apparently the same as facing her fear about leading the country because… I have no freaking clue. In the present, David stabs his fear – and apparently stabbing totally confronts the fear of not being a good father.

This root had really bad advertising, it has to be said. In the past, Rapunzel goes through her fears some more before we have a grand reunion with her parents then David explains his parenting fears to Snow White. She throws sappiness back, of course.

Back to the past, Emma, Hook and Regina arrive and Regina explains a side effect of the fear root. Facing your deepest fear means your courage enters your weapon and David’s missing sword hilt (it broke in the combat) means his courage was imbued in the weapon and has now been stolen by the Wicked Witch

They enter the storm cellar, but while they were waiting for Regina something has broken in. They go downstairs to find no sign of Rumple – but they do find a broken cage with a spinning wheel inside, with straw spun to gold. Only Rumplestiltskin can do that.

Meh. Sorry, but Meh. Nothing will convince me David is a compelling character and it needs a lot more development than some bog-standard parenthood worries that he decides to drug away to convince me he’s interesting. Add in the wretched cliché that has been over done and it all felt forced and a little tired

I’m both surprised and disappointed in Rapunzel. Very surprised that a Black woman was cast in this role – it’s an excellent choice since so often the role of Rapunzel is used to emphasise the wonderous joy of long, straight, blonde hair so it’s an excellent subversion. I’m disappointed because it looks like she’s going to be a single episode character – nice subversion but only a one off?