From Dusk Till Dawn: Season 1, Episode 4: Let's Get Ramblin' 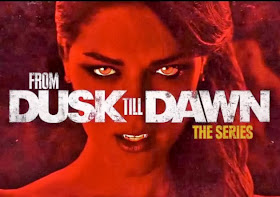 Kate Fuller remembers better times of her father’s preaching while he sleeps off the booze – she decides where they’re going (and gets an email back from the not very assiduous police force about her father’s vehicular homicide issue) and that is to the Dewdrop Inn.

Which is where the Gecko brothers are, with Seth trying to think of a way to cross the border into Mexico. Seth isn’t in the best mood for listening to his brother given the escalating murders. Richie talking about being invisible by closing their eyes probably doesn’t help much.

Meanwhile Freddie’s boss, having found the dead body of Kate’s very-annoying boyfriend, calls Freddie all kind of annoyed that he’s charging off after the Geckos using the “pretext” of the Cartel serial killings. Freddie explains what his expert last week told him and gets an awesome line back

“my son tells me lots of crazy things when I get home. That’s ‘cos he’s high on weed. Don’t make me listen to it at work.”

While his boss wants him to quit, he recognises that Earl’s last words pretty much make that impossible. I think I may like Crusty Boss Guy.

Back to the Fullers, and Jacob rams his son into a wall for referencing his drinking which just makes his daughter regard him with further outraged disgust. He makes his apologies to her in the room but she’s pretty clearly not very moved by it. She goes to the pool.

Family drama is interrupted by the arrival of the Gecko brothers and guns. Richie is sent to the pool to collect Kate (Seth doesn’t want to leave him alone with the hostages – I’m not sure sending him alone after a girl is a good idea either). She’s check the email – her father lied about the car crash that killed her mother. It wasn’t drunk driving – but it was speeding and an apparent fight between her parents. Richie arrives and starts hallucinating – starting with blood but quickly becoming disturbingly sexual.

Seth explains his plan to Jacob – he’s going to use the Fuller family as cover to get them across the border. Meanwhile Seth is bonding with the underage girl in a bikini and yes it’s exactly as creepy as it sounds. His psychic sight lets him see and comment on Kate’s pain and encourage her to talk to her father. And then really scares her by reading her memories back to her. Well it sends her running back to her room. Jacob makes all the standard pleas about only taking him but, as Seth points out, a creepy old man isn’t nearly as good a cover.

Time for a random flashback to Freddie’s first day on the job – because From Dusk Till Dawn simply cannot operate without a random flashback every 10 minutes. He and Crusty Earl kill a girl’s kidnappers and it’s very very gory, of course. I think this was inserted randomly so we don’t have his entire screen time be spent driving and obsessing over the knife. As he drives, his sat nav acts up, the radio changes, he starts zoning out and he accidentally cuts himself with the knife. All of that pales next to the ghost of one of those long dead kidnappers appearing to tell him to give the knife back to its rightful owners before yelling about tears of blood and spurting blood everywhere.

Their budget for fake blood must be huge.

The hallucination ends and Freddie isn’t all blood stained or even cut any more. But the sat nav does show he’s stood at the junction of Lagrimas (tears) road. Since hallucinations are awesome road maps, he decides to drive down it. The hallucination guides him to the burger place where Seth’s ex-wife, Vanessa, is still holding a cop at gunpoint. Freddie goes to talk to her and shows her a picture of some of the murdered women, telling her Richie is behind it. He warns her that Richie could hurt Seth – she gives in to help put Richie away. She’s arrested and she tells the very limited things she knows. Freddie heads to Seth and Richie’s motel – where he finds Monica’s body (and has another flashback about Crusty Earl).

Richie tries to use his new psychic sight to convince Seth to change their plans for leaving but Seth isn’t really in the mood to listen to his brother. The Fuller family has a little dysfunctional convo in which Jacob urges everyone to co-operate

Freddie calls his boss and tells him the scene (I’ve played it back 3 times – what does Freddie describe Monica as carved up like?) And Jacob dodges his questions – but the maid is helpful once the info is dragged out of her. For some bizarre, but likely racial reason, though he says it isn’t, Richie asks Scott about Bruce Lee and then tried to intimidate him for giving his kidnapper a mucky look. He uses his psychic insight to give Jacob the creeps – but that same insight has him move the RV to avoid the cops

Seth and Kate are the last ones to get on the RV – and Seth is worried about what Richie may have done to her. Richie, however, is using his “closed eyes = invisible” trick to avoid Freddie’s back up – and it works. But Seth and Kate leave just as the back up and Freddie reach the door – a gunfight ensures (Freddie, you’re firing at a man holding a girl hostage?)

Richie kills the back up and joins Seth. While Freddie is having his own hallucinations which he decides to shoot – warning the Geckos where he is. Bullets do nothing to the image – but the knife disperses it. He then charges in – but his delay have given the Geckos chance to leave. He fires after them, wounding Seth (another Red Shirt cop in really awful bullet proof armour is killed). There’s a chase and both Seth and Freddie run out of bullets – they tackle each other off the roof instead – onto the RV. Seth knocks Freddie off – and they drive away.

I’m interested in Richie’s development – it still has unpleasant shades of the sexual predation from the film, but they’ve really emphasised his odd psychic abilities that are both far more intriguing and far less problematic – it’s an interesting way of trying to take the character, not drastically change him from the train wreck of the original, but to try and iron away some of those unpleasant edges. And it creates a far more compelling character – and world – than the hair-trigger-murdering-psychopath which is done, convoluted, offensive and just plain nasty.

I’m disappointed by Vanessa’s arrest though – because her strength and demands from the last episode have basically become a gesture before self-sacrifice for Seth. Still, Kate’s willingness to challenge her father and question him does show a level of strength and determination especially since she is doing her own research.

It’d be interesting to have Scott involved more in the plot – and in a way that doesn’t lampshade that he’s Asian.