Once Upon a Time in Wonderland: Season 1, Episode 13: And They Lived... 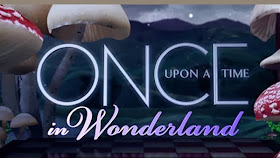 The spell is finished – Amara squats by her son, ready to resurrect him as she is now one of the most powerful sorcerers in the world (with Jafar). Which involves turning her back on Jafar – which is damn foolish

Jafar refrains from killing when his dad arrives and tells him to stop because Jafar has super-epic, legendary daddy issues. The ex-sultan makes a plea for mercy which, it has to be said, is rather rich from the man who tried to drown his child. Jafar’s not impressed and uses his magic to finally claim his dad’s love. His father proclaims his love and devotion for his child – and then Jafar reals the second half of the plan; having secured his dad’s love he will then kill him so his dad can know what it’s like to be murdered by someone he loves. He then drowns him

At least Jafar’s little act of patricide gives Alice, Cyrus and Amara chance to escape – by carrying him until they find a carpet to enchant. They flee to the White Rabbit’s burrow where Amara uses her magic to heal Cyrus. Introductions made, Amara announces that now they have to take down Jafar.

Jafar goes to hunt the Jabberwock with the Vorpal blade – because now he fears nothing. He stabs her with the sword (she’s apparently lost her teleport/super-speed ability) and pins her to the wall, imprisoning her.

Next he summons the Knave and tells him he’s brought Anastasia back from the dead! The Knave is overjoyed – except the catch is Jafar’s also used his magic to make Anastasia fall in love with him. Yes, Anastasia now loves Jafar – in a twist that is extra rape-tastic. He also decides to raise an undead army.

Amara’s plan is to return the water to the Well of Wonders, undoing the genie curse, removing the spell and her and Jafar’s super powers. Alice, not realising that Anastasia is back, protests that they promised to try and bring Anastasia back but Cyrus is on Amara’s side – they risk losing the Knave if they launch an outright magical war against Jafar. So new plan – Cyrus and Amara return the water to the well while Alice gathers an army to take down Jafar (he’ll still be a wizard even without super-god-power).

Jafar makes a stirring speech to his army – so they may be back from the dead but they’re not zombies – sending them forth to hunt Amara.

Alice delivers a much soggier speech to her army (that the Rabbit has recruited).

The first battles begin between the different forces - Amara isn’t much delayed – but Cyrus decides Alice won’t stand a chance without magic and, yes, she is defeated and captured and dragged before Jafar to be tied to the furniture. Jafar wants to know where Amara is and rather than use magic to read Alice’s mind or force a truth spell (hey all powerful and all that) he threatens Alice with going back in time and changing the past – making it so Alice and Cyrus never met.

Alice strikes back – her love is real and she doesn’t believe his magic can erase it. She mocks his power – the illusory love he thinks he has, his army that are walking corpses: none of it real (the army looked pretty real, I have to say). And LOOOOOOOOOOOOVE CONQUERS ALL SO HE WILL NEVER WIN!

This bothers Jafar. Personally I would have lopped off a limb, but that’s because I’d be a much better villain. He’s distracted by some necessary messenger killing of zombie-soldiers telling him Amara went through the doors (which lead to the Well) so doesn’t ruin Alice’s life – but he does realise that Anastasia has been their ally for some time now and knows all their little secrets – so asks her instead.

Jafar heads off to the Well, leaving Anastasia to guard them – and she does stop the White Rabbit from sneaking in and freeing Alice. Instead the Knave talks to Anastasia, appealing to her love and when she gets close enough to his magic barrier she asks “what is love?” and he pulls her to him (Jafar, most powerful sorcerer in the world – terrible at cages) and kisses her.

True Loves Kiss kills all curses, it’s is a Once Upon a Time rule. Anatasia is restored to her senses.

And at the Well, Amara makes her goodbyes to Cyrus – when Jafar ambushes them. He zaps Amara – and kills her. Cyrus is knocked aside (but not killed for REASONS)… but with Amara’s death the water that was used to save her life falls to the floor. Jafar needs to do better research (or ask Anastasia more questions).

The Rabbit burrows in Alice to save the day – and by “save the day” I mean be captured by Jafar’s magic. He punts the rabbit – and grabs the water Cyrus tries to move the water into the well – Jafar stops him and scatters the water. Which means Jafar stopped the water being returned – Jafar stole the Guardian’s water

As is her wont, the Guardian hands down a genie curse (hey, can this curse come without the “unwrite the basic safeguards of magic” codicil? ‘kay thanks!). Jafar is bottled

The Knave and Cyrus’s 2 brothers are freed from their bottles, the genie curse on them is broken. The brothers celebrate and Alice and Cyrus are ecstatic.

He an Alice return to the palace where Cyrus is reunited with his brothers, though it’s bitter sweet with the knowledge that Amara died for them.

And Anastasia, resurrected with the power of the genies, dies. Will grieves over her body – but Alice and Cyrus have water from the Well of Wonders; not stolen, given so free from a curse. It wasn’t her time, resurrecting her doesn’t flying in the face of destiny. Apparently anyway. Anastasia is to go on – but the Red Queen is to end. Anastasia is restored to life.

It’s time for Alice and Cyrus to leave Wonderland and go home. Hone in this case being Victorian London to get married – and her father finally accepting Wonderland’s existence and blessing their wedding

He could hardly doubt with the White Rabbit running proceedings. We have a beautiful super-satisfying wedding scene. At the end of which, Alice makes her goodbyes to the Knave and Anastasia and they return to Wonderland

Years later, Alice reads the story to her daughter – ending with a White King and White Queen ruling Wonderland.

Awww… the ending was a little twee, but since Once Upon a Time in Wonderland is cancelled, I can’t blame them for shooting for a happy, saccharine ending

I do feel it was a little rushed… like the writers expected (hoped?) to have another season to work with and then had to shoe-horn everything into the last episode. I think this resulted in a lot of pointless elements: Jafar’s enthralling of Anastasia was so brief that it seemed gratuitous and unnecessary. Jafar has spent however many years tormenting his father for his love – and then resolves his Epic Daddy Issues in 10 seconds? He raises a vast army, Alice raises another – and we get one small skirmish. Amara was barely around for 5 minutes and made virtually no use of her magic – and what was the point of the Jabberwock again? What did she do that Jafar really couldn’t? And why did she co-operate with him anyway?

It feels like all of these would have had more developed storylines – but there just wasn’t time to work with them.

I am sad to see Wonderland go because it had many elements I enjoyed, but I also feel the show had some major problems in conception. Not enough was made of the Wonderland elements – the Cheshire Cat appeared once, the chess motif and playing card motif were both minimal, most of the creatures were brief mentions, even the White Rabbit and the Caterpillar weren’t major elements. I also think it was too separated from its parent show – one brief appearance by Cora wasn’t sufficient to tie the two together, or ensure the fanbase latched onto the new show.

I found Jafar’s motivations to be rather shallow – and wish that Amara, Jafar’s father, Cyrus’s brothers and Cyrus himself had had a longer term more active role in the show to counter the POC as villain role he fulfilled. Jafar did do well in that role though and while there were tropes… it could have been worse.

We had a number of strong women – but Alice quickly became wet and seemed to lose her swashbuckling activeness that began the story and she didn’t really develop the insightful intellect which I think was supposed to be her hallmark. Amara (she was supposed to be the equal of Jafar) was depowered and died; Anastasia also depowered – and died; Jabberwock, depowered – and imprisoned; Elizabeth… dead. These women seemed to be set up to be brought down. It was also another show with zero LGBT people which is beyond annoying now.

The Knave is going to become a series regular on Once Upon a Time it seems – which is awesome since he was the best element of the show – though I will also miss Anastasia. I think, in some ways, they may have been part of the downfall of the show – they were both so much more compelling than Alice and Cyrus