Orphan Black Season 2, Episode 3: Mingling Its Own Nature With It 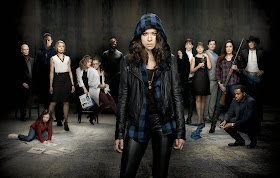 Sarah and Felix wake up in the truck where they’ve driven out in the country (Felix calls this camping – or “being homeless in the country”) they briefly discuss the shock of the revelations of Mrs. S their stepmother but that’s massively overruled by Felix stepping in a cowpat, because his shoes are far more important to him.

Daniel, Dyad’s pit bull, follows the trail to the not-even-slightly safe house and finds the bodies Mrs. S left round and about; he hides when the Prolethean farmers arrive to do some clean up.

Back to Sarah & co and Kira’s already bright and aware enough to realise they can’t use credit cards or they’ll be tracked. They steal breakfast instead, using Kira as a distraction while Felix does the stealing. Afterwards (after an anecdote from Felix about how mussy hair is his nightmare, of course), Sarah explains to Kira that stealing is a last resort thing. She knows the area and tells Felix they need to find an abandoned cabin so Kira can sleep in a bed

They find a cabin and Kira, this oh-so-serious child asks about Mrs. S who did protect them, despite the lies. That child is creepy and perceptive. Their good night sleep is interrupted by the home owner coming home, Felix panics and tries to wake Sarah – and gets slammed against a wall by said home owner. Called Cal. Who Sarah knows. He’s actually one of the men she previously conned. Cal wants rid of them all until Kira arrives attracted by the noise, Sarah reassures her and Kira asks (with freaky brain child insight) if Cal is her dad. Sarah doesn’t say no.

Cal and Sarah discuss this outside privately and, yes, he is Kira’s dad. But she doesn’t want a dad for her or anything, just needed a place to stay for the night, now they’re leaving. Of course, Cal’s not kicking Kira of the sad eyes out on the street. Sarah tries to explain things to Kira – who has her usual cutting insight- and why she brought him to see Cal, so she can know part of herself.

Felix, meanwhile questions Cal out of concern for Kira – he wants to know who Cal is and what he does. He created bee-drones (pollinators) that his business partners sold to the military which left him bitter – he got out when they weaponised his invention.

After which Felix confronts Sarah for dragging them there for Kira to meet her father without telling him anything, after lying about Kira’s dad for 8 years. Kira needs this. Felix agrees – but he doesn’t need it, he needs to go back to where Allison needs him, since there’s no need for him there. He says goodbye to Kira and hitchhikes back to town.

Cal and Sarah have a moment in which Sarah admits she could have run off with a lot more money but he made it “hard” to do so, making it clear there’s something feeling there. Gooshy feelings are interrupted by the arrival of a local cop. Thankfully he’s enough of a friend of Cal’s to take his word for it the shop lifters and abandoned truck having nothing to do with him (and to ignore his weed patch).

Sarah is worried and hates that she put Cal in a position to lie to the police, she plans to run. But he wants her to stay, to trust him, to stop running for a little while – and he kisses her. She is mesmerised by the power of the sexy beard. She wakes up in his bed the next morning (curse the sexy beard)

But Daniel is stills searching for them – he finds them, grabs Kira and holds Sarah and Cal at gunpoint. Kira tackles him and wrestles with him – when the friendly policeman who just told Daniel to move on drives up. Daniel shoots the cop. Cal has a rifle and will adamantly not give up Kira. He drags Sarah into his car, making her drive. While he’s searching her, he finds the Project Leda photograph which he considers a problem.

And then a big truck rams into them… the passenger side.

In the city Angie goes to see Art to tell him that Helena has disappeared, been wheeled out by someone unknown. And, again, Art tries to order Angie to leave the whole thing alone. Which doesn’t work

Allison decides to do some vacuuming while Donny is asleep on the couch (passive aggressive couple war 101!) Donnie keeps trying to be nice to Allison, she keeps giving of waves of not-subtle “crawl in a hole and die” signals.

Her play’s still going on. Her terrible terrible terrible musical about murder. Allison’s all stressed… but isn’t she always? And Angie introduces herself to her pretending to have moved in recently to the neighbourhood.

At the Dyad institute, Delphine and Cosima go to Leekie’s office (Cosima is so much fun) but Delphine has something more serious to show Cosima, something she’s not supposed to see. The video journal of Jennifer, another clone; she was the first clone to have breathing trouble, before even Katja. And Jennifer has recently died.

They watch the videos and watch Jennifer’s slow declined – aided and supported by her “amazing boyfriend” who is, of course, her monitor. Cosima takes a second, not entirely friendly look at Delphine, reminded just because she’s her amazing girlfriend, doesn’t change the fact she’s a monitor. Delphine promises they’re telling Cosima everything and even if Jennifer didn’t know, they still did everything they could for her.

With Delphine and her support, Cosima does an autopsy – on Jennifer’s body. An autopsy on her clone (pause a moment while I back away from the screen screaming). After taking a moment, they find MEDICAL things in both uterus and lungs – starting in the uterus, possibly the reason for the infertility.

Autopsy is interrupted by a call from Allison – she has, in her usual calm, reasoned manner (snerk) assumed that Angie is another monitor approaching her because Dyad knows she knows about Donnie so Cosima cannot possibly trust Delphine. Allison is slightly melodramatic.

When Angie next approaches Allison, on the day of the play, Allison decides to confront her and Angie admits she’s a cop examining Beth, Sarah et al. Yeah that doesn’t work. Nice try Angie.

It’s the time of the play. Allison has drunk, taken her pills and been forced to be part of a prayer circle dedicating the performance to Aynsley (which means if the play isn’t a comedy, it’s likely to become one). She looks out the curtains and finds that Felix has managed to get there to watch her.

She staggers into the play, raaaaaaaaaather drunk to say the least – and falls off the stage.

At the Prolethean farm, Mark is all creepy over Helena – who is now awake and being attended to by Grace who is Not a Fan. She tells Helena that Tomas is gone – and Helena says “good riddance”. While being very very scary.

Art goes to check out the Prolethean farm, taking photos at a distance as we hear Grace and Heinrick discuss their plans for Helena, well, Heinrick telling Grace that everything’s find despite her concerns. They’re bringing Helena into their family.

Which involves them all gathering around Helena’s bed wearing white. Helena is also wearing white – in fact that looks a lot like a wedding gown. Helena looks half out of it, drugged. Heinrick has a big speech about breaking away from a larger cult because his people are pro-science in the name of god. Their hands are tied “bound together before god.” He then carries her

Oh no, Orphan Black, let us not do this. Nope nope nope, definitely no. NO. Have her stab him repeatedly in soft places – that would be infinitely better – do not throw in gratuitous rape. It’s grossly unnecessary and more than nauseating. Helena has been more than abused enough!

So Felix confronts Sarah – he has a life. He’s just uprouted himself away from his home, dumped his credit cards, not knowing when he’s returning at no notice for the sake of Sarah and Kira. And she was lying to him. He’s angry. He’s furious. Doesn’t she know Allison needs him?

Are bloody kidding me!? Felix isn’t demanding some acknowledgement that he may actually have a life of his own! He isn’t angry because she lied to him and treated him without a shred of respect, lying to him, assuming he would be there when she called – as she and all the clones always do! He’s angry because he’s torn between serving two different straight women! Oh what is a good GBF to do when he has to play eternal servant and supporter to two separate straight women whose schedule clash!

Sarah ripped him up from his entire life – whatever he had going on he dropped it all to come with her while she lied about it the entire time. And he gets angry – because it took him away from Allison who needs him. Not from his life. Not from anything he was doing, but from a woman he can’t have known for more than a couple of months and now he’s painfully servile towards!

What did Felix do before Sarah came back into his life after a year away? Clearly nothing important to him! Clearly he wasn’t living any life of his own or having friends or doing anything! It seems he hung around in limbo, or an alternate dimension where this show thinks gay men live when they don’t have a straight woman for their entire life to revolve around – aha, the Straight Lady Signal has been lit, time to dispatch a gay!

Tatiana Maslany is still an acting mutant, it is known.

I just wish I could revel in the awesomeness of this plot, this world and this wonderful acting (awe inspiring acting) without the problems