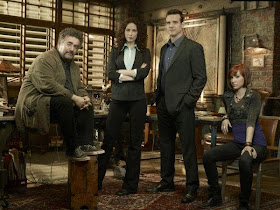 I love how these characters bounce off each other, Pete bothering Myka, Artie bouncing in with overdramatic panic (and sending Steve on a Ping with Claudia to distract her), hoogie envy… I’d actually like an episode where they do nothing all day but bounce off each other.

When Kelly arrives – remember Kelly? She had a brief fling with Pete before backing out because his Artefact heavy life was too chaotic. Well she’s in trouble and she’s heavily pregnant! Pete panics about the baby being his before Kelly reminds him that they actually broke up 2 years ago and human biology doesn’t work that way. Anyway, her grandmother’s television is possessed.

Oh, no Kelly, I know you think the TV is eating your brain, but it’s probably just the Tomorrow People, the plots will do that to your head.

Arriving at her grandma’s house, they learn granny is missing and it seems the TV is possessed, showing a Telenovela that has been cancelled – and still showing it even though it’s unplugged. Also, the TV’s glowing blue. Also, missing nana is now on the TV show. Kelly’s extra worried because the role her nana appears to be playing is likely to get murdered at the end of the episode. Purple goo doesn’t work – and they lose the cat into the television screen, where he appears on the show.

Which of course means convoluted things have to happen to drop Myka and Kelly into the TV as well, Myka becoming a maid and all becoming grossly exaggerated, melodramatic characters. Myka and Kelly hate each other and are in competition for Armando.

Artie arrives while Pete is completely lost in the plot (despite not speaking Spanish) and gives Artie a letter that Kelly’s nana received from the producers of the show. As a massive fan, they gave her a brooch used on the set – one that Nana on screen is wearing. Probably the Artefact – Artefacts are created with strong emotional connections and Kelly’s Nana refuses to leave the house after the death of her husband. Either way, to save everyone before the end of the episode they need to go in and goo the Artefact – with the help of Harvey Korman’s cufflinks to keep their real personalities.

Oh dear. Oh dear oh dear. Ok, Pete revels in the sudden ability to speak Spanish, before looking for Artie. Of course, Pete is the much desired Armando. And quickly finds Kelly – playing Carmen his pregnant wife – dramatically demanding his attention and threatening castration if he cheats on her.

Dona Fausta (Nana’s character) is attacked and her brooch is stolen. Pete wants to focus on the brooch but the whole theft/attack on Dona Fausta insists the whole thing is linked to a convoluted plot involving her long lost son. Pete follows that to Myka who is stuck in character as Maribel – she leads Pete to Artie but to learn what Artie knows he has to give up his cufflink to access his character’s knowledge. The three of them play pass the cufflink for a while. Before going to confront Alicia (Kelly), followed by a gun fight and more cufflink passing when Alicia and her mother run.

In the real world Pete and Kelly make their goodbyes – with Kelly saying it could never have worked between them because Pete is so in love with Myka.


B-Plot Anyway, Steve recruits the tense and stressing Claudia on a Ping for a guy called Charlie whose spine just randomly broke. So they drive in a car which Steve tells us all about. No, really, it’s the most ridiculous product placement I’ve ever seen. Even Teen Wolf would gape and they’re probably looking for a way to paint adverts on Scott’s abs. Gratuitous advertising aside, they speak to Charlie’s professor who describes Charlie as a slacker who just pulled off an awesome presentation before being slammed into a wall by a shadow – also while Charlie had a high blood alcohol level, the professor is sure he was sober.

At his dorm room, one of Charlie’s friends confirms that Charlie was so drunk he could barely walk. So off to where he parties (more camera angles on the car! Focus on the car! Ye gods how much did Toyota pay for this?), they get out and Claudia carefully mentions the brand of the car (oh gods, I wonder if Allison Scagliotti and Aaron Ashmore felt terribly dirty after this episode). Upon checking some damage and some videos from a phone they conclude that Charlie fell of a bridge – an impact very much like what happened in his presentation. The video also happened at the same time as the presentation – suggesting he was in 2 places at once – and he also yells in Latin “my candle burns.” For odd reasons. Steve also spies some Greek letters so concludes a fraternity and then flees the scene while Claudia teases him about that

Which means they need to infiltrate a frat party using Claudia’s boobs as a distraction and get Steve into the secret Frat basement initiation. When they pull out a double ended candle, a clear Artefact, Steve gets ready to goobag it – and is discovered. So they candle him

This splits Steve into two. His clone being a ridiculously over the top gay stereotype. Who finds a gay student by his “flawless cuticles”. I’m sorry did we take a trip back to freaking 90s where this kind of stereotyping was still considered forward thinking?! I’m not even going to recount the rest of the bullshit here because I may burst a blood vessel and it’s way too early to start drinking (more).

They grab the candle but ridiculous stereotype Steve runs off with it. More stereotypes and fights and it all gets resolved and the horrendous stereotype disappears.

Back at the Warehouse, Artie confronts Claudia over the missing Claire – yes she’s missing. An unknown person has taken her

I am going to have to throw up my hands on this one. I have little to no experience of anything resembling a Telenovela and don’t know whether this portrayal is a parody of a genre that positively revels in its over the top melodrama, or is an ignorant, stereotyped view of Latin American media. I think it’s more towards the former than anything else, from the very little I understand. It was certainly one of the whackier episodes. But I think there was also a sense of how important this media can be, especially for someone like Kelly’s Nana, lonely and bereaved she took comfort and excitement from this high drama of her melodramatic shows.


Steve… look, one of the reasons why Steve is one of the better gay characters we’ve come across (admittedly, the competition for “good” gay characters isn’t exactly fierce) is that he resisted stereotype. From the very first moment he came out to Claudia, he has adamantly refused to be the GBF to her, he has always made it clear, in the excellent words of Cosima, that his sexuality isn’t the most important thing about him. Even when Claudia and Pete (oh gods Pete) kept throwing gay jokes and stereotypes at him (over and over and over again Warehouse 13) he has always refused them, rejected them and said that no, he is Steve Jinks, a character who is gay – not gay Jinks the gay agent of gayness who is gay with extra gay, did we mention gay? Just last episode we had an excellent moment were Steve told Pete that he wasn’t a walking cliché. Just. Last. Episode. Is that why we have this? Steve had a moment of finally demanding they quit the clichés – so the show has to turn him into a rough mess of clichés? And in doing so they imply that this is at the heart of Steve – indeed, any gay man – just repressed down. All the stereotypes are true, honest, and a gay man who doesn’t embody them is just burying that part of himself…

Well done writers, one of the more decent gay characters we’ve seen and you did your utmost to destroy him in one episode. What a way for this show to complete its last season.