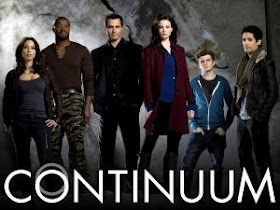 John Doe wakes in the middle of the night from a traumatic dream. Upset and confused, he tells Keira some memories of his daughter – but then looks out the window and is shocked by the lights in the buildings; he thinks the towers should be dark. Keira asks why and he says “ribbons of dark slash the starlit sky” and then says that it’s dangerous.

Alec, in his lab, has a Eureka moment with Halo – achieving something Jason says they won’t manage until 2028 (anything to do with him ripping the chip out of dead Keira’s head?) A body that Carlos has just noticed is missing. And Alec isn’t returning his calls which makes Carlos agitated.

They test Halo on Jason and not only does it work – but it completely cures his time-travel based confusion. Of course going public with that may ask some questions (is Jackie, Alec’s lawyer, in on the big secret?)

Dillon remembers Betty’s first day on the job and is all sad and angsty and Dillon cracks. He calls in Keira and tells her how he thinks they’re not doing enough against Liber8 (Keira points out they’ve sunk nearly every resource they have against Liber8. She doesn’t mention that fighting the PR war is not actually their job) and he confesses to using his daughter as bait, her whole arrest being fake. He wants Keira to get his daughter out before there’s another Betty

Keira is busy predicting Liber8’s next move to a curt and angry Carlos. Liber8 focuses on corporations that will later be the Global Corporate Congress so she looks at one of those companies that is around today and will later be a member of the Congress – the currently small pharmaceutical company, Gautuma who will master nano-medicine rapidly becoming a complete pharmaceutical monopoly (except a few episodes ago Sonmato was developing cures?)

Of course, it’s hard to convince Gautuma they’re a target because they are currently so small. They look around – and a Liber8 mole (Dillon’s child - Christine) calls Lucas to let him know the police are looking round; Lucas tells Sonya. Gautuma is about to launch a major drug trial against Alzheimers and all is looking good and positive. Until Carlos does some digging and finds that Kellog is buying up Gautuma stock. They also find Christine in the employment records so Keira has to tell Carlos what Dillon has done. Carlos is not amused. He says they go ahead as they would with anyone else, they can’t ignore their best lead on Liber8 because Dillon is playing his own foolish game

Keira tries to question Kellog but he’s cagey – but they do remember that the narcotic-from-the-future they had to deal with in a previous episode was once an Alzheimers drug. Keira also stops John Doe from fiddling with his dog tag because he may activate it (it has a picture inside) and come to the attention of the Freelancers. They talk emotion, sentimentality and clinging to family as time travellers (including Keira’s own mental gymnastics that allow her to keep going) and find a key to a bank safety deposit box hidden in the cuff of John Doe’s jacket.

She finds footage from the bank’s CCTV showing John Doe placing an item in a deposit box – one that she later gave to the Freelancers. And they still can’t figure out what Liber8’s plan with Gautuma is but need to check the drug they’re releasing to see if it is Flash – which means Keira sneaking in invisibly to steal a sample.

Alec finally talks to Carlos to assure him he’s just working on some kind of funeral for Dead Keira. And he’s called into a secret meeting with nefarious unknown bigwigs who tell him to slow everything down, he’s rocking the Powers That Be boat. Alec complains about this to Kellog who assures him he can handle them; he’s more focused on boosting the marketing on Halo.

Sonya takes Christine to see Julian because Sonya wants advice - she doesn’t understand why, when they expose what the corporations are doing, people do so little. Why isn’t their more outrage? Julian points out people feel impotent, powerless – they may hate what’s happening but they also don’t think they can change it. She says they need a leader (hint hint) and he hands her something he’s been writing. Alec also drops in to see him – he wants Julian to endorse Halo. He wants to hire him as a Vice President in charge of corporate responsibility – and as a taste of his help, hands him a file that Sonmato for Julian to use. Julian uses it and they seem to consider going forward as partners.

Downstairs, Sonya is tearfully moved by what Julian has written – she calls it Theseus (the name Julian will be known for in the future when he leads Liber8). Christine keeps talking a good game to Sonya, seeming to tell the truth by talking about Dillon going from seeing the Public as something vital to protect to “souring” on them – all of them.

Keira is summoned by Charlotte and the Freelancers and the tension is still high between them; they won’t let her have the device she brought to them and she won’t tell them about John Doe.

Time for  conference with Carlos, Keira and Dillon where they discuss where Gautuma is Liber8 linked – and reveal that Christine is involved; Carlos discusses extracting Christine but Dillon wants to go ahead, it’s a risk to Christine but he wants Liber8. Keira objects and Dillon pulls a “how dare you question mah authoritay!” but Keira points out that an untrained teenager as undercover is way beyond the scope of his authority. But he refuses, she stays in play and if it turns out that Gautuma is repurposing Flash they will keep it quiet because hurting the company (even if it’s doing wrong) will only help Liber8. Keira and Carlos back down. Keira is very disappointed in Dillon

Keira pursues her own plan, giving documents to Kellog (presumably the results that say Gautuma is using Flash – Kellog notes that he’ll have to sell his stock). For extra issue – John Doe recognises Matthew Kellog as a big deal – and he doesn’t even know who Alec Sadler is.

The report confirms that Gautuma’s drug is Flash – not only Flash but it directly matches the drugs they confiscated and while the drug can help many today, the damage it does is so horrendous it’s not worth it – especially it arriving 70 years early. Keira uploads the data to a secure server to Kellog who, it seems, goes to the press with it. Keira also grabs Christine.

He also threatens the “old White guys” of the shadowy people who threatened Alec – referring to both Julian’s take down of Sonmato and now Gautuma, warning the same will happen to anyone who goes against Piron. He tells Sonya that she owes him (after all, taking down Gautuma is what they wanted) which is also what he told Keira.

And all is not well with Halo – the new, clear, Jason is having problems

Alec, analysing the chip from Keira’s head gets a new image – not of Curtis Chen killing her (though he was in the room), but of John Doe coming from a surprise angle and shooting her.

Dillon is not amused and chews out Keira for poor Gautuma’s stock price (not the use of an illegal drug, of course not) – but Keira also brought Christine. Not just to follow Dillon’s instructions and get her out, but to have her seen as a spy so Dillon won’t use her as bait any more, adding “no more Bettys”.

Alec tells Keira he needs to see her – and she, Alec and Carlos go to Dead Keira’s send off. We have an incredibly awkward moment of Alec and Carlos saying goodbye to the woman who is, technically, stood right there. Alec’s send off is to use the incomplete time machine to scatter the dead Keira’s body through time which Living Keira approves of – but her CMR detects that dead Keira’s CMR is missing. When they’re alone Keira confronts him, outraged and that the Alec she knew would never do that – Alec points out he isn’t that Alec. She is furious with him and he decides not to tell her what he found on her CMR.

Keira has a new plan for John Doe – him using Flash to reconnect to his memories. He tries it and remembers his name – Brad Tonkin, part of a militia. He remembers his family - and his mission, his one way trip. He tells her there’s no going back, that his family and Keira’s are all dead. He watched his family die and he volunteered to go on this still undefined mission.

Dillon’s Liber8 obsession has reached all new levels. In some ways it has set him on this route – he’s pro-corporation in part because Liber8 is against them (and, of course, it’s his own path to power). He sees Liber8 behind every crime, he’s used his daughter as bait, he is sinking nearly every police resource against them – he even knows all this and wonders if he’s crossing the lines – but his obsession keeps pushing him. It’s reached a level where Keira has to actively take steps to protect Christine from her father’s manipulations

Brad seems to be a suggestion that they’ve changed the future – their machinations have sidelined Alec and brought Kellog in as the new big architect of the future. A future which may be even worse, given Brad’s fear of lights at night. And if he has been sent back to stop this terrible dystopian future from happening, surely killing Keira and allowing her (still dystopian but presumably less awful) future to happen is the way to go

Kellog seemed beleaguered at the beginning of this season, marginalised, side-tracked and powerless, scared even. Now? Now he’s in Piron, he’s in Sadtech and he’s even in Liber8 and using them all for his own gain – even Julian. It’s really well done – both crafty and believable.