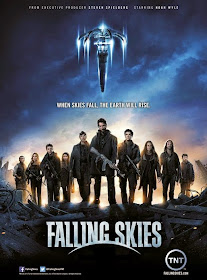 We’re still in the ghetto with the big ship over it (hey, Falling Skies, I think your analogy could use more BLATANT PARALLELS! Slap some swastikas on that thing!). We have reminders that the fence is impregnable (and dangerous), that Tom is becoming a mythical, anonymous revolutionary leader known as Ghost who is loved by humans and hated by the Espheni.  And that there are no children in the camp – in fact, when a woman has a new born baby one of the flying Skitters (hereby called Flitters) tries to take it away – but for Tom’s intervention with his flamethrower.

Tom and Weaver are still imprisoned (technically), Weaver’s still fraying at the edges and Tom is still mapping the entire ghetto.

That’s a lot of recap, but it was well and quickly done.

The Skitters decide to kick everyone out of solitary – including Weaver and Tom. Brief reunion and a Harnessed kid is dropped from the big ship to deliver the ultimatum – until “Ghost” is handed over there will be no more food. And the Espheni have caught on to calling bad guys “terrorists”. They also think identifying the solitary confinement people as “ruthless criminals” actually means something. Oh and the Ghost isn’t their friend. Honest. Really.

This attempt at propaganda is just so utterly ridiculous I can’t even begin to address it. I’m going to put it down to the Espheni (who have MIND CONTROL ABILITIES) have never had any need for propaganda and are, therefore, laughably bad at it. Because they don’t need it. But they use it anyway. FOR REASONS (Falling Skies no longer needs reasons for anything?)

Of course Tom wants to give himself up, because the man has never come across a bad idea he didn’t love. Weaver vetos that plan and suggests hitting Pope’s stores instead. Tom moans it isn’t a permanent solution (sorry, Tom, you’re in a ghetto where people are, you admit, already starving. “Permanent solution” isn’t on the table).

Weaver decides to follow Pope to his stash and he is followed by a gang of men who are hungry and don’t want to share so Pope and Weaver work together to fight them (is this the first representation of Middle Eastern people on the show?). Anyway, turns out Pope doesn’t actually have a stash, he just spread the rumour so everyone could stroke his ego and be impressed.

Hal, meanwhile, interrupts Tom’s plan to say he has one of his own – and introduces him to Botha who is an expert at escaping Espheni prisons. He does this wearing a Faraday suit – but he needs copper to make it work. Luckily, Hal knows people who horde scrap metal.

…why, in the name of all that is sensible, would people in this situation be hording scrap metal?

Botha also thinks he knows where the power cord for the fence is on the outside. He also has a radio that allows Tom to contact Cochise. Thankfully Cochise has, for some unknown reason (Falling Skies no longer needs reasons for anything) changed his hi-tech communicators to radios. As you do. Cochixse confirms the Espheni are building a new power device to go on the offensive (unlike the previous power stations that was defensive. Because power stations are selective). No-one questions exactly who the Espheni are intending on attacking (did I mention Falling Skies no longer needs reasons for anything). No Cochise can’t get them supplies, yes he knows where Matt is and he will go looking for him

Was there actually a point to this radio conversation?

Tom puts on his Ghost kit and goes out in view of the big ship, apparently giving himself up (it’s not like it’s the first time he’s just decided to hand himself over).

Tom is taken onto the ship and the Harnessed kid gives him the offer – the Espheni need him to be part of their war effort to fight a common enemy, something big and scary and ominous and vague and apparently the whole reason why the Espheni go around the universe sucking up resources. As an aside, the Flitters are apparent all that is left of Red Eye and the rebel Skitters. They need other soldiers to fight the big bad – they can’t use Skitters because… because.. they just can’t ok! And they can’t use harnessed human children because they’re unpredictable (uh, since when? You’re even using one as a mouth piece?!) So they’re going to transform human adults (he even conveniently gives Tom a timeline – what a helpful exposition monkey!) and anyone who doesn’t co-operate (if you’re removing free will, why does co-operation matter?) will be made “less conscious” (wait, the free-will removed adults will be conscious?) Insert standard threats to family. Because they neeeeeed Tom because… oh who cares, they just do!

On the ground, Hal and several other men get on bikes and where balaclavas and shoot things at the flying ship with clumsy catapults and other, rather ineffective, tools. The Espheni is apparently confused by the concept of several people all wearing balaclavas. Because there can only be one balaclava or something. While they’re all distracted, Tom gets to see where all the Skitter guards hide and sees a positively ridiculous diagram of how the fence is powered. No, really, it’s ludicrous and so simple I can’t even imagine why a diagram is even necessary. Yet even with this simplicity a 3 year old can follow, Tom has to trace it with his finger.

They drop Tom and food back to the ghetto. And Weaver and Pope found a tunnel, blocked by the fence, but still, TUNNEL! This is apparently good. Apparently tom made a deal with the Espheni to co-operate – but he got what he wanted (the silly diagram).

To Anne’s brigade where Anne is driving people to the ground with her all-day-all-night march. Anthony is still not a fan of this plan, nor is Deni. A random skitter shows up and they shoot it, so they have a convenient Skitter to question using Deni (random Skitter wandering around all alone in case exposition is needed). It tells them all about the re-education camps, the new-order and that they will all be led by the Hybrid which Anne, naturally, takes to be her daughter Lexie. Anne loses her ever loving mind and stabs the skitter repeatedly despite Deni being mentally connected.

Remind me again why these people are following Anne? (Beyond “Falling Skies doesn’t have to make sense)

That night, Anne apologises to Deni and Deni reveals that whenever the Skitter thought of the Hybrid it felt a vast black “fear” that blocked out the west. So of course the terrible fearsome west is where they’re going

At the culty sanctuary, Lexi plays with water and Ben talks to – damn that sciency guy, have I got to look up his name? (Is it me, or have there been surprisingly few casualties?) Kadar – anyway, Kadar warns Ben that everyone treats Lexi like god which is slightly creepy and also that, since she looks like a 21 year old but is actually not even 1 yet, there’s a decent chance she’ll continue to age and die real soon. He’d love to help, but Lourdes (cultist-in-chief) won’t let the “non-believer” near Lexi.

Maggie also seems to try and stop Ben cutting ahead of the line or worshippers but Ben refuses to queue to see his own sister. When he’s out of earshot, Maggie apparently approves. Lourdes, however, does stop Ben because UNBELIEVER! Lexie, thankfully, does want to speak to her brother – but not Kadar.

Alone, Lexie pretty much admits that, yes, she did destroy the mech. Ben tries to bring sense – Lourdes is gaining lots of power manipulating her, they have no guards. She responds like a blissed out fortune cookie and Ben takes exception – and she gets angry and the wind picks up. Which is totally not intimidating, honest. They talk family and Lexie agrees to see Kadar.

Kadar takes a blood sample and Lourdes bustles in, angry that anyone dare study Lexie – and claims Lexie can’t consent on her own – Lourdes has to do it for her. They have to wrestle Lourdes away from grabbing the blood sample while she growls that they’re not worthy. Agitated Lexie makes the ground shake and causes a massive high pitched noise that makes them all cover their ears and shatters the vial of blood. The blood doesn’t flow away, it wriggles away.

When Lexie is asleep, Maggie talks to Ben and they both aren’t happy with Lourdes’s influence. Ben is determined anyone going to Lexie has to get through him and Maggie looks all proud and happy – she’s so relieved that she’s not the only cultist anymore (is that romantic tension I sense?)

Lexie wanders outside and begs a robed figure to take away her powers because they’re scary. Matt follows – the figure is an Espheni.

The indoctrination camp is still a Hitler Youth knock off where kids are taught how wonderful the Espheni are, teaching everyone how wonderful shopping your family is. Of course, Matt says all the nice words while we’re reminded he’s in a little resistance cell. One of their class mates, Sheila is “graduating” even though she has “terrorist” parents. She promises to lead her parents into a trap.

Mat and Mira have a mutual crush which is all sweet and stuff. Awww love in the Nazi indoctrination camp. But it looks like their little revolution club may have been rumbled. Matt quickly tells Mira to leave while he looks for the others and the Aryan Youth Leader Kent comes in to say Matt’s friend has “graduated” (uh-huh) and they’ll be getting a new collaborator dorm-mate, Hector.

This show doesn’t even begin to care about its canon any more. Stuff just happens – they’re completely sweeping away the past seasons and they’re doing it really clumsily. It’s just fraying all over the place.

There’s this big bad enemy that no-one thought to mention before now and is still ultra vague. The Skitters and mechs, despite being more advanced and stronger and faster and tougher than humans are apparently inferior soldiers. Harnessing is now “unpredictable” despite never being before unless you REMOVE the harness. Why are human adults superior soldiers? And if they’re going to remove free will, why the ghettos and Hitler Youth camps? And why do they even care about Ghost anyway? What was he actually doing that worried them so much? And why do they need leaders who have free will? Why is Tom remotely useful to them? And why can’t they just use eye-worms?!

The Volm and the rebel skitters have just been hand waved away, disappeared with incredible convenience in the downtime. And then we have the magic woo-woo hybrid.

WHY DOES NONE OF THIS MAKE SENSE?!