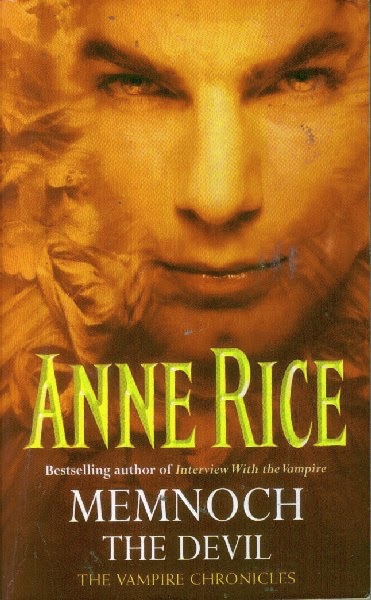 Memnoch the Devil takes Lestat on an extremely long tour of the past, creation, angels, evolution, the passion of Christ and more – because he has a job proposition for the Brat Prince

Memnoch the Devil, also known as “the Bible according to Anne Rice” or “Anne Rice’s theological musings”. Perhaps even “Memnoch lectures you endlessly while Lestat practices his melodrama”.

The rest of lecture. Info-dump. ONE LONG INFODUMP! One horrendously long, unbelievably unnecessary info-dump. An info-dump that I cannot even imagine having even the slightest relevance to the series. It really is just one long exposition on what the Bible could mean or a spin on it or on the nature of god. It’s a vast amount of world building that is utterly irrelevant to anything the vampires do in their daily lives

If Lestat weren’t being dragged around to occasionally declare himself impressed/awed/horrified it wouldn’t be relevant at all. The vampires are utterly superfluous to this story. All of the characters are utterly superfluous to this story. It may as well have been one long the logical lecture – inly told in the most long winded, dullest way possible.

I’d like to write more on this since it is the vast majority of the book, but there really is nothing more to say. It’s just a big splurge of theological theory pretending to be a novel. It’s completely irrelevant, not very interesting and probably better suited to analysis in a seminary than actually read as a novel in the ongoing vampire series.

But looking at the bits that actually involve the vampires rather than some of the dreariest and long winded exposition I have ever had the displeasure to ready, and it’s not much better or more sensible. Perhaps because these little add ons have just been forced to try and drag this info dump into her world

Lestat fell in love with his victim – I can buy that’s imply because within 10 seconds of meeting just about anyone, Lestat falls in love with them. It’s what he does, it allows even more pointless melodrama. So we get a really long and pointless backstory on this man and some books he read (which seem to be more part of the endless theological debate that basically comes down to “sex and pleasure and love are not bad things. Suffering is not valuable.” Seriously, that’s this entire damn theological diatribe that took an entire book to relate summed up in one sentence) which is never gain relevant. This goes on for countless pointless pages where we learn the pointless minutiae of someone who DOES NOT MATTER

Aaargh, this is something I’ve seen in Anne Rice’s novels time and again - especially n Queen of the Damned and The Witching Hour - every character briefly mentioned will get this endless examination of their lives. We do not need this much detail about every irrelevant side character

And there’s Dora, I’m going to leave aside the bizarre menstruation feeding, and just ask what is wrong with this woman?! Lestat comes to her having killed her dad and she starts calling him darling? Where did darling come from? What? Why?! And she goes from not caring about relics because they’re just physical objects and faith comes from within, to being completely enraptured and obsessive about... a relic. Her characterisation didn’t even begin to make sense

We do have the “everyone is bisexual” continuation – since even Lestat’s victims were. But it’s, again, not conveyed well. For a start the whole religious monologue that consumes this book puts the love for men and women as a dramatic holy amazing experience – and it’s always men and women. The divine heterosexual is really strong there.

And his new bisexual victim, Roger, slept with women and… boys? Why are we expressly saying “boys” there? And the only partner we learn any detail about is, of course, a woman – which is very reminiscent of the same problems in The Tale of the Body Thief

It then goes on to describe a priest who liked to get up close and heavy breathing with the young Roger. “But we can’t judge these men”.

Excuse me I most certainly CAN. This my judging face. It is judging. Looooots of judging.

Bisexuality in these books seems to be something that is theoretical,  while actual sex and sexual affection is only depicted between people of the opposite sex. And there’s a lot of mixing in the under-aged there.

The book focuses mainly on Lestat and Memnoch but we do have some POC around – like David now in the stolen Indian body. Roger is described as “Asian” which is elaborated to “Indian, Japanese or Gypsy; could even have been Italian or Greek “ which is… a rather broad stretch of ethnicities.

This book is awful. There is no story here. There is no plot here. What pathetic characterisation exists is broken and inconsistent. The writing is florid, eye-searingly purple and horrendously slow. Frankly, if I weren’t making a point of burrowing through the whole series I would not have finished this book, I wouldn’t have reached the half way point.