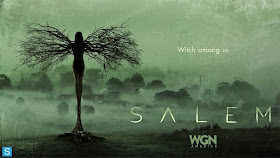 Mercy has lost her ever loving mind in the body dump – but her ramblings reveal how arbitrary and cruel the people of Salem are in deciding who should be cast out and not given a proper burial. Mary arrives to offer reassurance that soon all the evil men will be destroyed in the Grand Rite (Mary is also very concerned for “her girls”, the girls who follow her). Mercy asks what is coming and Mary shows off the Malum apple

Cotton agrees that evil apple is evil and also adds that it “opens” and unleashes lots of death. Anne decides to visit, interrupting his rambling, to ask if you can be a witch and not know it. Because it’s really sensible to air your doubts about being a witch before one of the witch hunters, Anne. Keep making decisions like that and I’ll send you to True Blood or Falling Skies. She wants to know if someone can deed her soul to the devil for her and drops her cloak – she wants him to examine him and look for witch marks.

This is, remember, about an hour after she told him he had the wrong idea when he tried to kiss her. Because Salem that’s why.

As he gropes her, her eyes turn red and her tongue becomes forked and snake like. Cotton doesn’t notice this because of the UBER AWKWARDNESS and declares her totally witch free.

See what I said last week about the evil Increase actually being effective while the also evil but lesser evil Cotton is a really bad witch hunter?

At the House of Pain, Increase is now talking about torturing the girls into saying John is a witch. Mercy arrives with witchy crawling skills to reassure them all, even though she can’t rescue them. She encourages them to testify against John.

Mary goes to see her witch council who praise her, they only need 5 more innocent victims to complete the ritual – John and the four girls will do it. Mary would still rather not have John but that kind of is the definition of sacrifice. She protests his innocence but that’s kind of the whole point. They say they raised her as a child (apparently?) and add that if she did free him she would be exposing herself as a witch to him and probably lose his love.

Cotton brings his theory to his father who in turn describes how he ended a Grand Rite in Germany by strangling a 6 year old girl (yet another example of how his evil deeds are effective at saving humanity) and got his hands coated in hellfire in the process – hence his blackened hands. He adds you stop a Grand Rite by killing the witch that began it before the moonrise that ends it and he thinks that witch is John Alden.

John Alden’s trial begins in which Increase has his long speech including that being captured by the Native Americans helped John’s evil become more evilly (as well as his use of women  - evil beings of evilness in his eyes). Cotton speaks in John’s defence, but John does not, even when Increase identifies a lump on his neck as a witch’s mark, he even laughs at Increase’s accusations. Increase brings up John’s repeated doubts over the witches, his calls for everyone to be sensible as further proof of guilt. Mary tries to defend him when Increase tells them that her servant saw John force himself into her house. There was also that forced kiss on Anne. And, of course, the brothel orgy. Then the 4 girls who followed Mercy testify against him as well.

Cotton cross examines the girls, suggesting they could be examined and found virgins (adding further to their ordeal). He suggests they’ve been overwhelmed by “heated thoughts” while tortured (wait, did he just suggest she got her rocks off being tortured?) He goes on to describe just how awful torture is for extracting the truth and goes on to compare his dad to the Inquisition (*gasp* CATHOLICS! The horror!) He shows off the nasty tools that Increase uses for the court to see and be so horrified by. Increase, naturally, has a tantrum and clears the court for the day.

Cotton talks to John afterwards, putting aside the trial to ask where John hid the Malum. John tells him but he worries that it being known he has it will just condemn him completely.

Of course, when Cotton goes digging it isn’t there because the witches already have it. He goes to his dad so they can work together finding the evil apple (lets the whittlers take them all!) and, of course, in doing so reveals that John had it (neglecting to mention that he had it because they stole it).

Hey John, with Cotton defending you I’m sure you’ll get to the gallows in half the time! Saves all the waiting

So they search John’s house. Which is like the only place in all of Salem, second only to Increase Mather’s underwear drawer (itchy, definitely itchy) where the Malum definitely ISN’T. Of course Increase again sees this as proof of John’s guilt and how silly Cotton is to do his silly doubty thing. He also adds if there’s even a chance Increase is right then thousands will perish so how can they take the chance?

Of course, the opposite is completely true since Increase has not yet figured out what “innocent sacrifice” means. Now Cotton has lots of doubts and pouting and accuses John of lying. Just before the 4 girls are dragged out to the gallows. One manages to reach John to apologise for lying and gives him something – the half of the coin he and Mary split.

Cotton tries to protest but, of course, Increase doesn’t care about truth or honesty or innocence. The four girls are hanged.

Mercy’s follower who hid takes the news to Mercy. Mercy tells her to return to Salem and gather the “young, the poor, the suffering” to make an army of them – and it sounds like she intends to overthrow Mary.

The next day at trial increase adds a new direction – claiming that John slaughtered militia while working with the Native Americans. John continues to refuse to answer (in this case because the accusations seem to be true). Increase holds that silence is a confession.

After the trial, Cotton demands the truth. John snarls back that Puritans don’t want the truth, they’ve reduced the world to “good” and “evil” with no shades or nuance. He describes how he was left for dead in a battle and found by the Mohawk (not the tribe he was fighting). They healed his wound (including the scar that Increase found) and treated him well. For some reason their holy man declared him super special and he lived among them for a time. Only they returned from a hunt to find the village burned and all the women and children killed. Killed by the militia – who didn’t even realise the difference between the tribes (like the slaughter of the other tribe’s innocent would be ok?)

So John went on a rampage and killed nearly all of them (and the last one he killed later and Tituba questioned his dead face). Cotton has more doubtiness.

Isaac finds Mary and she’s tearful and regretful and wants to take it all back. Isaac blames himself while saying how wonderfully saintly and powerful Mary is because he’s sure she can do anything (he even calls her “Magic Mary” because he has so much faith in her incredible abilities).

She goes to John in his cell and John cynically notes he may be the first person executed in Salem for a crime he’s actually done. He’s ready to die for his crimes and he’s tired of being without her. She keeps saying she can save him while he talks over her with more angst and pouting. He points out the impossible to break out of cell that they’re in, not quite realising that she did get in some how.

She kisses him – and when the kiss ends they’re in the wood. Damn shame she couldn’t do that for Tituba. Or Mab.

Gloriana and Anne, under suspicion of being witches (even if her own) get naked and/or groped. John – not so much, they find a lump conveniently on his neck and that’s sufficient.

The trial is exactly what you’d expect – replete with the prejudices and certainties of the time with doubt itself cast as a problem.

I think I’m more interested in Mercy’s crusade than I am in anyone else.