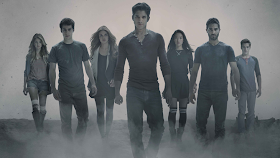 It’s a full moon and the police are doing the crime scene thing on the hospital roof around the body of the Wendigo, Sean. Sheriff calls in Derek to be his expert – he knows nothing more about Wendigo but he smells Liam; Scott had only told the Sheriff about the Wendigo and the mouthless axe-murderer (the Muted he’s referred to on the credits) which is something else Derek knows nothing about.

Liam is currently tied up in duct tape and in Scott’s bathtub. Stiles is not impressed. I have to say this isn’t Scott’s best idea ever. Stiles asks if they’re going to end up burying pieces of his body in the desert – he is very very very good at pointing out how bad a plan is. But it could be worse Scott, Lydia could be the one telling you how wrong you are. She is very very good at that. Stile points out this is why he makes the plans, Scott’s plans are bad plans. So they drag Liam out and try to ineptly explain becoming a werewolf which goes terribly wrong with Liam escaping.

Awful awful plans. And the werewolf can’t hold onto a guy with a bad leg.

Over to Peter in the wolf loft – and the Muted throwing a tomahawk into his chest. And declaring that Derek is next.

It’s Full Moon night so Stiles chains up Malia – and the Sheriff walks in on his son chaining up his girlfriend. Poor Sheriff.

To Kira and Lydia looking through Lydia’s notes and seeing the pages of code she’s written without realising. Lydia decides they should probably figure it out before it kills them, after all her drawing of a tree led them to the Nemeton. Lydia is awesome, as ever. Facing supernatural weirdness with snark and class! Also, Lydia’s mother gives her the key to the lakehouse which is apparently where they’ve been chaining Malia

To Derek and Peter – who isn’t dead. He was stabbed with a wolfsbane axe which can now, apparently be cured with fire. Well that’s new. The blowtorch is not fun. Derek goes to tell the Sheriff (and Derek’s getting snarky! I approve) and takes the little wrist communicator the Muted used. Parrish recognises the device – and the tomahawk – from the military from when he was in Afghanistan. Derek and the Sheriff seem to agree to bring him into the big dark secret. Or at least into the investigation

He does some computer stuff and comes up with message in the device – from someone called Benefactor who is sending the Muted money (I assume). He’s a paid assassin.

New characters! Garret, Violet and Mason. They’re freshmen. Liam arrives because he ran to the school to escape Scott. Mason has questions and Liam has few answers. Liam begins to sweat and half wolfy issues – but sees Scott across the grass and hurries off. Scott and Stiles corner Liam to try and talk to him again

Oh gods it’s awful. Scott tries to talk about being brothers now, which is really convoluted and really awful. Really really awful. Scot you are fired as alpha. Certainly Alpha of any pack animals.

The gang meets to discuss how they get Liam to the lakehouse before the full moon and he goes all uncontrolled and wolfy. Someone finally thinks to ask Lydia and she gives the excellent idea of inviting him to a party. And they’re going to use Kira, the trickster (kitsune), to do the inviting. Which means expecting Kira to play vixen

Cue that clichéd moment when the hot girl walks down the stairs, her hair all billowy, looking perfect and the guy, Liam, looking completely stunned. And she trips. SHE TRIPS! Oh that is so perfect. She recovers well at least.

He goes to the party with Kira, but his wolfy senses are bothered by the music on the radio – even though it’s actually pretty quiet. Meanwhile, Stiles has done some research on Liam and why he was kicked out of his last school – the kid has massive anger issues and a habit of destroying teacher’s cars. Ok, one car. But it was pretty wrecked. Which is not someone who should be a werewolf.

At the lakehouse Liam is wonders that there aren’t a lot of people and Kira may have invited him there to be alone with. The prospect does not seem to excite him, but he’s probably not put 2 and 2 together and, besides, werewolfyness. She leads him inside where the gang is waiting with chains.

They explain things to him (werewolf, werecoyote, banshee and once possessed by a very very evil spirit). Malia shows off her eye glow. Liam rants and rages – and is overcome by wolfiness  and hearing cars arriving

See, Kira told Liam that the party was for everyone. He texted Mason. Mason took him at his words. The party that isn’t is now actually a full blown party. They hurriedly get Malia and Liam down to the basement (and off the hardwood floors. And yes, Lydia noticed and protested the floors). Lydia is left with instructions to throw an awesome party with 2 minutes notice

She’s Lydia. Of course she can do it.

Scott struggles with Liam (Scott, you’re an Alpha. Act like it) until Kira knocks him out. Once he’s unconscious they face the reality that Scott has turned a 15 year old.

Stiles stays with Malia because a werewcoyote on the full moon is better than a freshman party and a pissed off Lydia. He stays with her even as she begs him to leave and says how much she is desperate to hurt him (in graphic terms). Her bonds begin to fray. As she gets more and more free, she keeps telling him to run and he refuses – he’s sure she won’t hurt him. Yeah, not so sure. But Stiles understands the fear of hurting the people you love – as he knew when he was the Nogitsune.  He talks to her… he unchains her.

She throws herself at him – and hugs him. Stiles take a point and a bow. She controls her coyoteness and returns to human form.

Lydia is furious, people have got in her parents very expensive wine collection AND someone (Garrett) has ordered a key of beer. Of domestic beer (complete with the “yes you do look 21 to me” surcharge. Come on, American beer doesn’t count as alcohol!). Lydia is not amused.

She goes chasing Mason who has wandered upstairs, she wants the party to end, she wants everyone gone, she’s freaking out about the condition of the house (and the spilled wine) and… why is this conversation muted? The dialogue just goes silent – I can hear everything else, just not the conversation. But from what I can gather this is a hint – Lydia is freaking out because the house is being sold and everything needs to be pristine. Notably nothing upstairs is valuable

When the door closes behind Mason, the room goes silent, the music is cut off. Lydia tests the door and realises the room is soundproofed. She looks around the room in apparent confusion until she sees a record player. She turns it on and we hear… someone talking? But garbled? Faces then push themselves out of the damn wall, speaking faces.

The keg delivery guy goes out to find someone has slashed his tires. This, briefly, makes him wolf out (he’s a werewolf?) but only briefly, he gets it under control. He returns to huiman form – only to be garrotted from behind by Violet using a heated garrotte. Ok, that was unexpected. She takes a photo of the body before leaving and returning to the party, her garrotte now a pretty necklace. She joins her boyfriend Garret who has just got a text from The Benefactor saying the moneys gone into their account. Looks like they’re paid assassins as well.

Back to Kira and Scott who are sweet and lovey and slow dance and awwwww. Kira also sees if she can distract Scott enough to break his full moon concentration – which is sweet and cute and very silly. And then Liam ruins it all by breaking his chains. He jumps through a window and runs off into the night

Scott chases Liam into the woods until Liam tackles him (ALPHA ALREADY!) and is driven off by a flashbang exploding near them. It’s Chris Argent, back from France! Chris gives  Scott some advice about corralling and controlling his beta and Scott goes in and finally does a decent job of reassuring and helping the confused and terrified Liam. He’s terrified of causing trouble again after he was kicked out of school – hates the idea of his parents seeing him as a monster.

Derek and the sheriff investigate the Muted and since he logged onto the school wifi, go check it out. The sheriff gets his gun out – he knows this school! You go armed! They find a pool of blood under a door which Derek finds odd – because that much blood he should have smelled from outside. The door is wired to an explosive… they missed that trap, but only Derek’s fast reactions stop the Muted man’s thrown tomahawk from hitting the sheriff.

They fight but it turns out the Muted isn’t so great against a werewolf who can see him coming. They pin him down and Sheriff arrests him. Unfortunately that’s when Peter joins them. Peter has a grudge. Peter doesn’t want an arrest. Peter is a werewolf and it’s full moon – Peter shreds the Muted. The Sheriff keeps the gun on him while Derek tells him there’s a better way. Peter is a “creature of habit”.

Kira goes to check up on Lydia hallucinating in the white room – she hears the key to break the codes of her notes. She breaks the code with the keyword “Allison” and her notes are translated – a list of names and points values by them. Kira, Scott and Lydia all appear on the list (but low points. Is that good?) Sean’s family featured very highly. Lydia realises it’s a list of supernatural creatures in Beacon Hills – a deadpool.

Scott trying to explain the werewolf thing was awful, and not just awful but ridiculous awful – forced comic relief isn’t funny. This was neither funny nor sensible. I do wish Scott would actually be an Alpha – an Alpha wolf shouldn’t desperately struggle to hold Liam back. Scott should roar and put him in his place

Kira tripping on the stairs? Skewering that entire clichéd scene? I applaud. Almost as much as I applaud Lydia but, y’know, I always applaud Lydia.

We seem to be going a new direction for Beacon hills. We knew the Nemeton would attract new weirdness to the city which is to be expected. But the Wendigo had clearly been living there for some time. And a random delivery guy happens to be a werewolf? Is he a part of a pack or are there a lot of these random wolves roaming around? Is there a whole supernatural population we haven’t seen yet? And if so, given the events of the last 3 seasons, shouldn’t they have been present, involved or noticed at some point?

Lydia on the house – I may be reading too much into it, but the combination of nothing upstairs being valuable (suggesting the valuable stuff is only in “public” areas of the house) and the house on the market suggests that Lydia’s family is having money trouble.

I can’t even begin to parse the rest of that scene. Bansheeness?

Still, action, drama and snark. This is of the good. Chris Argent returning isn’t bad. Derek and the Sheriff teaming up is pretty decent and while Peter is an arsehole he has some great one liners.

However, we’re now on episode 4 of this oh-so-gay show and still no Danny. From the media before the series began, Mason is supposed to be gay – but so far no indication of that.