The Strain: Season 1, Episode 2: The Box 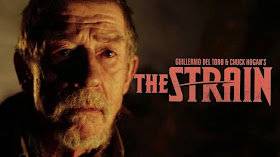 Introduction to another new character – Vasily the exterminator. As in rat catcher. Well, in this he’s a pest control and city inspector

Augustin delivers the big box to a warehouse – but Eichorst isn’t there. The box starts moving though and Augustin decides it would be healthier to run like hell into the pre-dawn light. Sensible man.

Airport! And if these mini-scenes continue I’m going to stop doing the bold lettering – it’s stylistically useless and in the way

Anyway, the CDC team are shown the man who died last episode with his head all nastily splattered. They confirm the head was splattered, that there is ammonia all round and they pick up a sample of the ooze. Which they call guano – vampire guano

This crime scene musing (including Nora wondering what is wrong with Jim – um… the body with the head caved in, maybe?) is interrupted by the four survivors being released which  spurs Ephraim into action. Because the survivors are being released – what? I don’t even begin to understand this? Even if some TV reported has declared it to be carbon monoxide poisoning, you don’t get to break quarantine because of a TV report! The Director, apparently, has decided quarantine doesn’t apply (I’m going to assume corruption rather than incompetence) but Ephraim and Nora insist and have the legal power to make it stick

Which Eichorst reports to Mr Palmer the evil one (hey, we stopped with the silly bold place labels?) who isn’t worried because he’s confident he can rustle up enough media pressure to have the quarantine broken. Palmer is more interested in meeting the big boss cloaked monster

And Eichorst wants to meet Abraham, still in a holding cell at the airport (while Palmer’s media team go to work). They knew each other from a long time ago - and if there was any doubt where, Eichorst repeatedly referring to Abraham as “Jew” and by the concentration camp number tattooed on his arm (which Eichorst put there) should make it clear. Eichorst gloats, throws in some mockery of a woman who Abraham loved and he killed. While Abraham makes it clear he’s not finished fighting yet and throws in a bad guy he sliced into itty bitty pieces. The old good guy vs bad guy dialogue – but dramatic and powerful still with some real sinister evil going on

Of course, being a bad guy, Eichorst doesn’t want to destroy his biggest enemy but have him watch everything fall apart (and, therefore, have chance to fight it). This is in the bad guy rule book.


Augustin goes home to his mother (who he loves and treats with affection and respect and his brother - who he considers a slacking slob and gets really pissed off when said brother gives the clock he stole from Abraham as a gift to their mother. The brother objects since Augustin was the one in prison – and he thinks likely to return.

Back at the CDC and an official from a different acronym has teamed up with Ephraim’s boss to deny a quarantine even though all evidence points to one being necessary, because it would be bad for business. They overrule him and use his personal life as an excuse to ignore the evidence (Ephraim pushing his boss doesn’t help). Also the coroner’s office isn’t picking up the phone (on account of being dead).

Naturally, Ephraim and Nora don’t stop there, despite being taken off the case and go to question Captain Redfern – the pilot of the plane and one of the four survivors. He remembers the Box – put on the plane by big government officials, and agrees to see Ephraim’s doctor friend for his lingering symptoms because he can see why the quarantine has been broken – political and economic manoeuvring.

Ephraim and Nora also does some illicit worm testing – and find the little worms hunger for blood. Which is when personal life kicks in and he has to go to a custody hearing – urged to take time for his own life by Nora. He also kisses Nora goodbye.

Ephraim arrives at his wife, Kelly’s house who praises him for his vast and dedicated work ethic (which is kind of a dig since the whole reason the marriage is breaking down is Ephraim’s putting work ahead of family) and we meet Kelly’s friend Diane who is all snarky. At least Ephraim makes the effort to be nice to Matt, Kelly’s new partner. He does take the chance to try and poke his son Zach towards asking for joint custody at the upcoming hearing. But even Zach realises that it’s ridiculous to have join custody when Ephraim is never there.

Personal life and sexual tension – back to the vampires please

Or to Vasily, Vasily works – he’s a health inspector using his little UV light to track rat urine in a classy kitchen (the same UV light that tracks vampire guano.) And no, he doesn’t take bribes and yes he will shut your swanky restaurant down. And if he has to clear the restaurant by waving a dead rat around, he will.

To the other survivors, lawyer Joan teams up with musician Gabriel and his agent Ruby to try and cash in on being survivors. But they’re both having the same side effects as Captain Redfern – an echo in their ears. Joan also starts bleeding from the gums.

At evil HQ, Fitzwilliams casually talks about murdering someone for a liver for Palmer in between worrying about Palmer since he insists on leaving the building and is courting death with his failing health. Fitzwilliams is also not a big believer in what the vampires are offering Palmer. Palmer goes alone to the big box – now empty. Eichorst shows up to play major-domo. There’s a rush of wind and Palmer kneels before the giant cloaked figure and welcomes it – it answers in a voice that I can barely understand. It removes its hood and from the back we see a bald head and huge, clawed hands – Palmer cowers.

Ephraim, Nora and James return to the case because Redfern is in trouble and having all kinds of weird test results at the hospital. He’s not feeling well – and has the same neck scar as the airline victims, only it healed super quickly so they missed it before. Under the UV light, they see the worms crawling under his skin.

Time to head to the morgue since they’re still not answering the phone and call the boss man and tell him to re-quarantine. On the way they get a call from Gary – the man who lost his little girl and decided to punch Ephraim (I think Ephraim has that effect on people) who is just so happy they sent his little girl home. It rather surprises Ephraim and Nora to hear the girl is alive.

Gary hangs up and checks on his daughter. In the bath. With blood red eyes and her hair falling out. She’s hungry (that’d be me out of there – the only thing more creepy than monsters are creepy children monsters). As he reaches for a towel for her she pounces – and a tentacle shoots out of her mouth to latch onto his neck. He dies. The girl is still creepy.

Ephraim and Nora arrive at the morgue to find it spookily abandoned. And since it’s a morgue that’s a hundred times more spooky than anywhere else (except bathrooms with creepy children). It becomes even more spooky when they realise the bags full of bodies are all empty

I wrote the line “vampire guano”. That can never be a good thing

Having read the books I find myself both at an advantage and a disadvantage. The disadvantage is higher. This is a show that relies on horror, that relies on tension, that relies on creepiness. And that’s lots on me. I know what happened to Gary’s little girl, I know what she’s going to do. I know what will happen to the four survivors. Ok, I don’t think the show really relies that much on the unknown, most of this is predictable – but so are most horror movies, that doesn’t stop you jumping. At least not the first time you watch it – but the second? Not so much.

The advantage of having read the book is not being frustrated so much by the presence of Augustin and Vasily because I know more about them – but still, without that it would seem to add to the layers of unnecessary characters.

It’s compelling but I feel I miss the full effect. And I didn’t like Ephraim in the books and like him no better here.