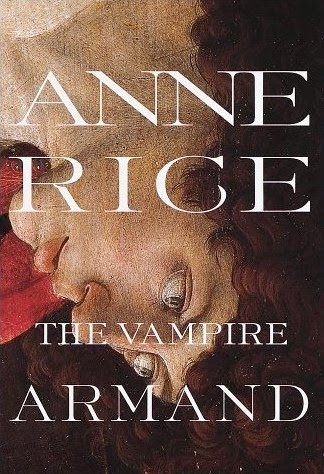 It is Armand’s turn to recount his history to David to be recorded for posterity
If Lestat and Louis’s books are digitised, he could always just copy and paste the relevant sections.
I am not a fan of this book, there’s very little about if I find even remotely enjoyable and the few steps forwards it takes are so overwhelmed with problems as to make whatever progress it made completely irrelevant. This book was not a fun read, it was a boring read and, more than anything else, it was an unnecessary read
Which underpins the main problem with this book – it’s unnecessary in many ways. Firstly, The Vampire Chronicles is already a grossly over written series with a truly unnecessary amount of back story for the tiny crumbs of actual plot and present day happenings we have been given. I know more about Louis than I needed to, but at least Interview with a Vampire existed to introduce the world. I know every last teeny tiny detail about Lestat, but at least he is a central figure in the plot. I know Marius’s background in painful length but at least he is, somewhat, a foundation for the other characters in a rather convoluted manner. Even Meheret dropped in for a dreadfully long story time of her history
This is a lot of unnecessary back story already for a very limited plot. It doesn’t need yet another book full of back story with no actual present day storyline; enough with this endless, long winded recitation of their pasts! Recounting of history is not a substitute for plot
But this unnecessariness is compounded by the fact that this is Armand! I know some people are big fans of Armand – but honestly I have no idea why. Armand hasn’t been relevant to the plot line since Louis left him after burning down his theatre. Armand has had no significant presence in any of the dramatic events of Akasha waking up, or Lestat playing body switching or Lestat’s appalling navel gazing theology  – nor did he really start a storyline of his own in this book. Armand is completely irrelevant to current events and this book did nothing to make him relevant. Nor has he ever actually been relevant!
This is shown by this book, he was a brief stopping point in Marius’s, Louis’s and Lestat’s history – a permanent side character in all their lives. The book even lampshades it:

“How can I tell you about something that doesn’t interest me? Is it supposed to interest you? The problem is that too much has been written about my past already.”

I don't know Armand, is it supposed to interest me? Because it didn’t. And yes, every remotely interesting moment in Armand’s life had already been covered in previous books; Armand had nothing useful to add and did nothing useful or interesting outside of those moments. It is repetition with another repetitive story of being a young vampire and Armand and Marius tacked on (the basics of which we already knew). This character is irrelevant! His story is already told! His history is already known! Why are we repeating this?
For padding we have prose that sets record for purpleness even among Anne Rice’s work – and that’s already a screaming magenta – gross over-descriptiveness and yet more theological and ethical rambling. I would say there are seminary text books that contain less theological navel gazing than this vampire series, except all we really do is circle the same, few, narrow abouts about good, evil and aesthetic over and over and over again, from book to book, every vampire has the same tired theological moping over interminable pages of pseudo-philosophical claptrap.  At the end, the plot line is running so thin that we actually have a chapter of just describing the other vampires; because we really need Armand to sum up Louis, Lestat, Marius et al?
As an added bonus, Armand can give Louis a run for his money when it comes to the angsty-whiny-vampire role. He’s also, as I mentioned before, an extremely passive figure who just seems to latch on to whoever is going past, declares that he loves them (and everyone loves everyone within seconds because this is the Vampire Chronicles and it’s what they do. I think it’s a good thing they became vampires otherwise they’d frighten the neighbours by declaring their eternal love for the postman every time he dropped by) and then being their faithful shadow until he’s cast off to the next one. To even further stretch the padding, there’s a huge amount of recap of previous books
I said there was a step forward albeit with lots of problematic issues – and there is. Armand is bisexual and, unlike previous books, his sexuality towards other men is shown, graphically, in detail and not left as a theoretical possible (and covered in purple, because of course). It’s also drowned in a lot of under-age issues that also plague this story – and series.
Armand is 17 when he was turned and he had been with Marius for at least 2 years before that – in an intimate relationship with Marius at that. Armand’s youth is constantly obsessed over – Armand treats him as a pupil, as a child and there’s even a disturbing line where he says:
“Good night my young love, my child love, my son.”
We get constant references to how young Armand looks, how he can’t grow a beard, how he has the face of a child. A woman who Armand and Marius sleep with talks about sleeping with “a man and a boy.” Armand is over and over referred to as “a boy” who looks extremely youthful even for his young years. And it’s not just Armand, when people talk about sleeping with both genders, they talk about sleeping with “women and boys.” When a group of men are attracted to Armand, we get an explanation that they’re interested in women, but open to beautiful boys.
And this isn’t just this book – it has been a problem throughout the series as I mentioned in Memnoch the Devil and in Witching Hour as well. Over and over we see this equating of bisexual men and preying on the young – or even outright paedophilia. I cannot celebrate that we’re finally seeing a bisexual character actually having sex with a man when he spends the entire book being enraptured by the fact his partner is a CHILD (in his own words).
Even in the present day, Armand’s current companions are a 25 year old woman and a 12 year old boy (who is also Arabic and fetishized to hell and back over his race).
This is beyond a pattern now, it’s not even subtle – it’s hammered home over and over again and it really really needs to stop.


What more can I add? Ah yes, we have an extreme paucity of female characters, but the ones there are get rescued.
Do I even need to write a summation? It was a grossly over written, not even subtly padded, story of a character who is pretty much irrelevant to the whole series and doesn’t actually have any story to tell beyond what has already been told. Read two chapters before bed time, you’ll sleep like the dead. Otherwise, I can’t see why you’d bother.