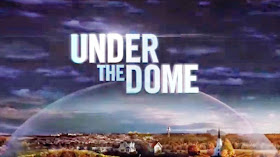 Barbie angsts to Julia about Sam. While across town the four hands wake up, Melanie all close to Junior for further these-two-are-definitely-a-couple and Angie has totally being replaced feelings. She’s also so happy that Junior stayed awake to keep them all safe. Uh-huh, something needs to eat Junior

Barbie and Julia alive and after a brief “yay alien egg that has imprisoned us!” moment, Julia tells Junior about Sam. Of course Junior doesn’t believe it and he stomps off. So Barbie decides they need to find Sam’s body. Barbie tells Jim he’s going to explore the tunnels (while keeping the whole Sam thing from him)

Rebecca Barbie and Julia reach the abyss. There they find compasses spin, a flare dropped into the abyss is just swallowed by the darkness and they don’t hear it land and a laser pointer can’t penetrate it. With all this reassuring knowledge, Barbie decides to abseil down.

This may not be the best idea anyone ever had.

Some distance down this huge crevasse, something starts to pull Barbie down. He jerks down the rope – and it pulls itself free from its anchors. Only Julia and Rebecca grabbing the rope stops him falling. Julia screams at Barbie to climb, he screams for her to drop him. Rebecca screams for them to do something because he can’t hold them both while they try to out-noble each other. Barbie wins when he says he loves her then cuts the rope, dooming himself to fall

And behold, Natural Selection in action.

In town Junior angsts to Melanie about Sam and Jim overhears. Jim takes this as a chance to try and get Junior back on side since he was getting so close to Sam, saying how weak and flawed Sam was unlike him – special special Jim who was chosen by the Dome to be so awesome. Junior actually makes me agree with him when he shoots back that Jim has to make everything about him.

Joe grieves for his sister and talks to Norrie which turns into Joe asking lots of questions about the dome which are supposed to be new, but really aren’t. Honestly “where does it come from? Why is it here?” we need an actual scene for people to ask these questions?

Rebecca tries to calm Julia down when Jim arrives seeking answers. Julia keeps news of Barbie’s fall secret and claims Barbie is bringing Sam’s body up from the pit. She then goes to see Joe, Norrie and Melanie and tell them about Barbie cutting the rope and falling . Joe doesn’t believe the Dome would ever allow Barbie to be hurt – he also adds the knowledge that he’s been in the school basement and the tunnel is completely new and part of the Dome’s plan. Which he seems to find reassuring.  He wants to send a robot drone down the abyss – which he can totally make because of a school club. What is this school club teaching kids how to make robots?

Rebecca goes home to find Jim waiting for her, being all creepy and menacing, talking about her “crossing him” and how the Dome named him the super special Chosen One. He intimidates and threatens her into telling him what happened to Barbie.

Barbie wakes up in… a park, a children’s play area in a park, full of people. He’s in Zenith, the town he and Melanie are from. He wanders, dazed, through the town until he sees a billboard for Aktaion energy with graffiti on it saying both “Hounds of Diana” and “dometruth”.

Sam is also alive there and wandering around, looking for the Davison psychiatric institute. There he asks to see his sister Pauline (Junior’s mother) in the locked ward. She’s stunned to see him – and happy since she thought he was trapped in the Dome. She also seems to be a teacher at the institute, not an inmate, despite Jim calling her insane all the time.

They both catch up, the Dome coming down, her faking her own death, him falling into the pit (he denies jumping). She contacted Lyle simply because he was the only one, well, delusional enough to believe her and her visions. She also reveals that Lyle is already out and in the town.

Apparently Lyle is almost catatonic. He just stares into space repeating “Melanie” over and over again. Which leads to Pauline being told that Melanie is back from the dead.

Barbie goes to his old home, finds his hidden stash – and a gang of big men with guns welcome him home. How sweet. Apparently Barbie promised to come back and do a job for the chief here, Rick, a job involving Aktaion energy’s R&D. Nor does he accept “I was under the Dome” as an excuse. After some beating, a new offer is made – do the Aktaion job for half the price

Back in Chester’s Mill Julia, Joe and Norrie send down their little drone – but it gets sucked down just as Barbie did and the signal goes dead. But on the recording of the picture they see a brief flash of the playground where Barbie landed. In it they recognise the obelisk from Zenith.

Meanwhile in Zenith, Barbie and a goon go to the ritzy house of the owner of Aktaion energy and Barbie deliberately ruins the plan by setting off the alarm. That owner? Is Barbie’s dad. He’s invited in for a drink in a room with a bar and the worst wallpaper that has ever been made anywhere on the planet since history began. They’ve been estranged for a long time (clearly the wallpaper drove him away). Barbie wants a favour – his dad to get him to the Dome so he can pass on a message

Which is not doable – the Dome has a 10 mile exclusion zone around it and part of the ground is a bombed out wasteland. He’s unwilling to waste his political connections on the odd, unexplained idea. Barbie and his dad have a classic Daddy Issues/dead mother argument, waah I don’t need your vast wealth. That settled, his dad agrees to help, especially when he realises Barbie wants to get to the Dome because of a woman inside.

Under the Dome, Junior and Melanie bring the egg to the abyss. When it gets there it creates an image of Zenith in pink lights. Everyone realises this is a way out – except Julia who is more interested in Barbie being alive and that he may come back.  Seriously, back UNDER the Dome?!

While Jim organises a memorial for Barbie in the diner (anything for the good PR, he’s good at using people’s deaths for that). Rebecca is not impressed and sees exactly what he’s doing.

And close with an image of a door Barbie and his dad walk past (because they’re walking in the woods in the middle of the night because reasons) that Pauline has painted.


Joe doesn’t think the Dome would let anything happen to Barbie. WHY?! The Dome has imprisoned them all, regularly throws random shit at them and has killed several people with that shit – but Joe – in fact their whole group – continues to assume some kind of benevolent intent on the Dome’s part?! Based on what? Why? Why have they turned the Dome into some kind of god figure?! Why would they assume the Dome’s plan – if there is a plan – is good for them?! Why would Joe, who has lost his parents and his sister, be such a fan of the Dome?

Aktaion? As in Acteon? He who was punished by Artemis (or Diana)? Oh we’re getting some Greek mythology links thrown in now. They seem to be the new thing – throw Greek mythology into your sci-fi.

So, we’ve taken a steep curve into EVEN MOAR questions land. I’m confused but for the first time in a very very very long time I’m beginning to see a tiny glimmering spark of hope for this show – because we’ve gone back to asking WHY about the Dome and maybe, just maybe, finding out. Not endlessly dealing with Jim’s newest supervillain plot. Or whatever random, implausible crap the Dome decides to rain down. Or Julia’s fluffiness or the teen angst – we’re finally addressing the Dome. Kind of.