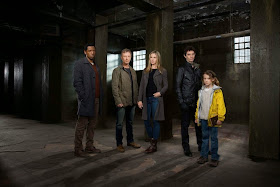 After Madison, apparently possessed by an adult man called Marcus, went wandering her mother is obviously distraught. Madison returns to herself in the middle of a Portland bus station, checking her pockets as memories of what she did while possessed come back – her reaching Portland, meeting a woman who welcomed her back and gave her a book (which has the cryptic forward “in the beginning there was death), a wadge of cash, a key and a ticket to Seattle.

She reads the book and it talks about living other lives, of her getting used to odd memories and the Cuiera Verde (very likely spelt wrong) and very cryptic and awesomely ominous lines about death –a and there being no such thing. Ominous crypticness interrupted by the attendant telling her she can’t get on the train without an accompanying adult. Marcus rises to the surface and snarls and threatens

Naturally Madison’s mother calls the police and her husband, Simon Madison’s father (the police, naturally, suspect him but she collapses in his arms). Their crying in each other’s arms is interrupted by the Nefarious Shepherd’s arrival, assuring them he will find their daughter. He asks lots of questions that make sense if you know she’s been possessed but otherwise sound deeply creepy and Madison’s parents quickly become suspicious. Rather than be kicked out he tells Simon about Alison cheating on him – for some bizarre reason he decides to believe Shepherd, a complete stranger he met seconds ago and storms out the house and she runs out after him. This didn’t actually further his investigation at all, I think Shepherd just likes being a bastard.

Alone in the house he searches it and finds a notebook with pages torn out, when he does a pencil rub on the indents he sees Marcus’s ominous warning “what goes around comes around.”

Shepherd goes to an address in Chinatown he asked the parents about – and which Madison visited. He breaks in and knocks aside a guy in his way to ask a woman where Madison went. Complete with violent threat – while she wants to know what Shepherd he’s done (9 year olds are unprecedented apparently) in and that the book was not prepared for Marcus Fox. She says “they” will kill them and Shepherd threatens to kill her anyway – and we have a fight scene with some random Asian man (martial arts, of course). Shepherd wins and kills the man – then the woman as she begs him not to.

He goes to the station to try and find Madison, but she runs out when he appears and hides from him (managing to look very ominous). Madison pays a bystander to take her to Seattle and reads the book – which talks about dying and returning

In Seattle, Jack is still looking for his wife, Amy, has gone to the office of Kerry, Crane and Hardy, the name of the company he found in her phone. He’s taken to see Todd Crane who clearly knows Jack but it looks like Jack doesn’t remember him (obviously pretending he does in one of those horrible awkward social moments); Todd claims that Amy hasn’t actually been in the office all week and more awkward with-each-seeming-to-suspect-the-other follows.

Cut to – flashback, flashforward? I’m not even sure. Anyway Jack wakes up next to Amy who has an odd dream that involves lots of fondling her own arms before waking up and speaking another language - Russian? She wakes up – but refers to herself in the third person and says that line that keeps coming up “in the beginning there was death.”

This was a flashback. Or a memory. Or a dream maybe since Jack wakes up in a car in Seattle still and goes through her phone to find some fuzzy pictures. He also gets a call from someone using Amy’s number saying “even if you find Amy, she’s gone” and telling him to go home. Using a voice distorter. Really? Y’know for a secret conspiracy these guys aren’t very bright – did they really think that would work?!  Especially since Jack is a policeman? “She’s gone”? Oh well, mr. ominous kidnapper/murderer I guess that’s that then! Just in case he’s not suspicious enough they have an Ominous person stare at him as well.

So Jack starts questioning all taxi drivers to find George who found the cell phone in the first place, all the while watched by Ominous Guy. George turns out to be willing to go above and beyond the call of duty, meeting up with Jack and sharing info –including that he found Amy creepy, surprisingly tall for a 5’ 4” woman and that she said she lived in Russia. But not just Russia – but Russian in 1883 when she worked as an assassin for the Tsar’s secret police. Now the creepy seems more understandable. George is super helpful, taking Jack to where she was dropped off (the back of her office building despite Todd saying she didn’t go to work that week). And she was with a man. Using random pictures in her phone, they track a building she probably went in – only she wanted to walk there presumably so she could tell if anyone was watching her.

Jack decides to hide and spy on people entering the apartment building. He and George end up being chased and attacked by ominous guys in black. George is taken down but Jack beats up both goons – when one pulls a gun the other says “she said no”.  George finally opts out of more investigative work. But luckily Jack then gets a call from Amy (with an odd intermediary first) – saying she’s home. Jack sees Todd on the balcony of one of the apartments, watching him – ominous music plays.

Random aside for no apparent reason - while Oz got murdered last week, it seems he has a reserve conspiracy lover to jump into his still-cooling shoes. Tim, of course, starts with arguing against Oz’s death being called a suicide.

On the good – I’m curious, I’m intrigued and this show has an excellent sense of atmosphere and theme. The ominous is still strong with this one! We’re also seeing pieces lining up with less randomness and a definite plot forming with minimum distractions. Also the actor who plays Madison is scary good – that child is scary! These are definitely of the good

I’m leery about representation because we have ominous cryptic Asians being ominous and cryptic – and two Black people roped in to help main characters. It doesn’t bode well

I’m also concerned that I’m having to make some suspensions of disbelief. Like the amount George was willing to do for Jack. Or that the ominous organisation actually thought their threatening message would drive Jack away (which was comically ridiculous). Before that, Amy could just as easily have left him – that message just confirmed something sinister was going on along with the random goons they just dispatched for REASONS. And I don’t get why she’d have so many random convenient photos on her phone (the apartment building from a distance? Really?) And Jack decided to scope it out? Why? What did he expect to see? And when? It’s an apartment building, lots of people come and go.

Even the way Shepherd questioned Madison’s parents and their reactions seemed convoluted and off.

I’m intrigued – but if the second episode alone holds together the plot with strange decisions and leaps of logic then this is going to go sour quickly.