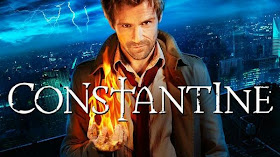 So we have a house all trimmed for the holidays and the sound of fighting within. Definitely the holiday spirit. Inside is very very messy, with lots of blood, a collapsed wall (and a woman underneath it) and a man floating on the ceiling. And a little girl. Ah hell, a little girl – horror trope no.36 little girls are the creepiest

The police arrive to comfort the poor girl (everyone in the house dead except for a dead eyed little girl? RUN! RUN AND DO NOT STOP!) and when the police argue (because the actual decent police officer thinks someone should sit with and comfort a girl) she shatters a cup of coffee and her eyes turn black (this demon just wasted coffee… truly this is evil beyond compare).

Cut to John Constantine (who wakes up ungracefully) being rousted out of bed by a woman who needs him gone now since her boyfriend’s coming home.

Back to the Mill where John is trying to eat his belated breakfast and Chas is playing nursemaid (Zed is in “art class” which I think is show talk for “has been clumsily removed from this scene”). Anyway this week they’re off to Birmingham, Alabama

To the house where John breaks in (“if I need you I will give a little whistle that suddenly chokes into silence” may be the best line ever), sees the damage, licks up some slime (as you do) and is surprised by Manny’s appearance. He’s here to say John isn’t special but they kind of need him to step up against the Rising Darkness which they still have no knowledge about. He also ominously talks about how everything is more powerful than it used to be. But he can’t actually do anything useful or tell John anything useful because Free Will (so he just shows up, is ominous then disappears). With a little spell, John sees what happened and that the evil little girl is possessed.

Next possession victim! A nervous kid (whose parents put in a ground floor bed room and leave the window and curtains open – kid has reason to be nervous!) who turns into  creepy kid who starts creepily tormenting his parents, strangling dogs and smooshing pumpkins (though since the kid’s favourite snack was apparently pumpkin seeds, he was pretty creepily odd before).

Back to John who meets a paralegal contact willing to break some rules (who John helped in the past) and reveals that there’s been a string of murdered parents who only had one kid who managed to survive the attacks – and they’re escalating. John decides he needs the name of the possessing spirit so he needs to speak to a survivor – and though no authority is going to let him near traumatised kids, the oldest survivor, Marcello, is now in his 40s – and in a mental hospital.

At the hospital a helpfully chatty employee tells John all about Marcello apparently killing his parents with an axe – and that he was abused as a child (at least show John pulling out a fake id to justify this flagrant breach of patient confidentiality) – which may be linked to Marcello missing several fingers. He’s also completely catatonic so that wasn’t much of a lead.

Lead 2 comes from tracking a ley line to guess where the next victim will be. (And Chas picking up the Sword of Night which is amusingly awkward since it compels people to tell the truth). Some more magic and John and Chas find the location of Henry, the current creepy possessed child. They decide to sit and watch until the possession becomes apparent. Unfortunately, a grown man creepily staring at kids while wearing a trench coat isn’t actually that welcome so no-one listens to him when creepy kid uses his creepy powers to squish a bully.

That gives John a cover for going to see the parents – unsurprisingly “your son is possessed” does not win him any fans – but does get him a punch in the face and a trip to a gaol cell. In the cell he mopes and tries to justify his uselessness on the fact that kids are his weakness. Manny decides to show up to remind us how utterly useless he is and poke John in his own abusive childhood.

Meanwhile creepy kid makes half his room explode and his eyes go black from edge-to-edge as his parents argue (a stereotypical argument between gentle nurturing mother and toughen-up-more-violence dad because gender roles are being writ large here). Daddy tries to tell his son violence isn’t the answer (having just punched out a guy in front of him – A+ there dad) while mother notices things are very very wrong and goes to see John in gaol.

John is released, tells the mother, Claire all about possession and lays out the options. In the end they go for a séance which is dangerous and takes 3 people. Since she’s a doctor she drugs her son and she, John and Chas go to Marcello’s childhood home where they hope to bind the possessing spirit. The house is also extremely spooky and it doesn’t work. Lots of doubt from John (who still rules out an exorcism because exorcisms and kids are a bad idea).

Yet they go back to Claire’s home to tell the dad, Daryl, that it’s exorcism time! The parents argue about this and possessed Henry loses his temper and telekinetically lobs furniture at Daryl. Well that answers the possessed question. Henry runs when John enchants a mirror as a telekinesis reflector – and squishes Chas on the way (Chas has to die in every episode he appears to remind us that he can’t die).

John chases Henry into a haunted house (it’s Hallowe’en). Of course he does, they needed to fill this episode with some more contrived spookiness until he finally finds Henry carrying an axe. John realises that the possessing spirit is Marcello (and he isn’t catatonic, his spirit’s wandering). John decides to talk to Marcello – and by talk I mean be attacked while he tries to shame Marcello with all the victims he’s left in his wake before finally managing to grab Henry and magically bind Marcello to his real body.

All done except for the unnecessary exposition in case you weren’t following the plot.

John Constantine’s methods of investigation are… poor. Honestly how many times now has he gone up to a completely unsuspecting, normal person and said “demons are real!!!!!” and expected to be believed?

This whole episode felt a little meh. There was a monster of the week, it wasn’t particularly complex, didn’t have any particular twists or complexity and, as a method of examining John’s past/issues it was just a bit shallow. Meh meh meh.

Also, this show is pretty damn bad with diversity and women – to clumsily write Zed out for an episode is a really appalling way to treat an already criminally underused character. Similarly, Manny appearing, saying something ominous, showing off the token Black guy, then vanishing again is pretty blatant tokenism. He does nothing, he achieves nothing, he is literally a mystical means to drop in random diversity without actually having to create a Black character.