The Vampire Diaries, Season 6, Episode 7: Do You Remember the First Time 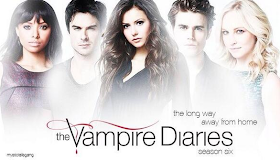 Damon and Elena have come face to face. Instantly the compulsion crumbles as the writers realise what an annoying plot line this will be. They declare their eternal love (briefly) before bravely stepping forward to do whatever they can to rescue Bonnie because she’s an amazing friend who has done so much for them

Hah! No. Elena can only remember bad things about Damon so no love. Lots of angst. Yay.

Damon goes to see Alaric in hospital to whine about all the evil things he’s done. I actually wonder if the writers sit back and read what they’ve written – because here is Damon reciting just a fraction of the evil things he’s done (and I’m annoyed at how much is omitted) and this isn’t a scene about what a terrible person Damon is – but about Damon complaining to Alaric about the memory issue. Though their friendship is still intact and Damon is glad Alaric is alive (though still kind of pissed at him so he torments Alaric a little bit). The patient tormenting has Jo show up to make it clear that she can’t repeat the whole vampire cure and that Damon must not tell anyone. She also orders Alaric on a date

Elena shares the whole Damon thing with Caroline who decides this is all good because Damon is evil and now Elena has Liam (character consistency is an alien concept to Caroline) because we really need a love triangle. For added funsies, Liam is still super super confused about Elena saving someone’s life and is going to completely violate this patients privacy to satisfy his curiosity. Elena decides to look troubled and angsty about this rather than compelling him into forgetting/letting it go/not being an arsehole because REASONS.

Over to Tripp the hunter who is now the captive of Enzo’s, apparently. Oh can people stop taking their enemies captive and just kill them? Matt wants him to live and Enzo wants him interrogated and Stefan wants him dead (meaning I am actually agreeing with Stefan. I feel so very wrong). Tripp protests to Matt that his friends are murderers because he has a laughing belief that anyone in Mystic Falls actually cares. So it’s torture time so Tripp can reveal the identity of all his vampire hunting friends.

Unfortunately, Tripp’s minions have kidnapped Sheriff Liz and are holding her hostage, so Caroline and Stefan (who she is still mad with) have to get her back (and tell Enzo not to kill Tripp. Also touch-screens and blood are annoying according to Enzo). Of course, kidnapping the Sheriff means Tripp’s attempts to convince Matt he’s on Team Evil (which he certainly is) and should come to the light kind of go awry.

Stefan and Caroline show up to collect Tripp and Enzo talks about Caroline clearly having a crush on Stefan because this is really what matters in this situation. (Why does every character have to comment on this? Seriously if they went over to New Orleans, Esther would pause mid kid-torturing to ask whether Stefan and Caroline are going to get it on)

Anyway, they agree the prisoner exchange and do it at the border of Mystic Falls – the anti-magic zone which is a great idea to stop the vampires just killing the kidnappers. But when Tripp crosses the barrier, his throat is suddenly slit. Looks like Enzo turned him into a vampire before sending him over – that’s an excellent idea. Matt is angry and sad about this because… I have no idea, he has Caroline’s consistency issues. Tripp dies

Caroline and Stefan then have relationship talk.

Time for the storyline which is so damn relevant to everything – Tyler is helping Liv serve drinks at some fancy party as some kind of “thank you for murdering that guy so I didn’t go wolfy” gesture. What a party? In Vampire Diaries? Why yes, yet another one!

Luke briefly shows up to talk to Liv about her relationship with Tyler to warn her about getting romantically involved when their apparently-not-nice-father and equally not-nice-coven call them home.

Jo, Alaric, Liam and Elena are all going to this one (Elena manages to restrain her usual instinctive need to invite EVERYONE EVER). Damon also shows up to be annoying (because he’s Damon) and drop that Jo’s a witch (it’s kind of hilarious how everyone is so cagey about it all season and Damon guesses and reveals within 5 minutes of meeting her). He also gets to see Elena’s date Liam and have Jo tell him how wonderful he is.

Damon promptly is more than a bit of a nuisance and throws in lots of compulsion and tries to jog Elena’s memory in between dumping lots of guilt on her for trying to forget their relationship. She leaves, Alaric says how guilty he feels to Jo and she points out Elena is actually responsible for her own ridiculous decisions. Jo also reveals she put her magic away (implying she can get it back) and references a “dysfunctional family”

Elena returns to the party to ask Damon to help her get her memories back because she hates missing a piece of her life. They take a road trip and then a more metaphorical trip down memory lane and it doesn’t work. So Elena walks off and and walks across the boundary to Mysical Falls. She becomes human and starts drowning (which is how Elena died to become a vampire) and Damon drags her back. This isn’t a moment of epic Elena incompetence – she’s trying to deliberately break the compulsion. And while this worked on Tripp, apparently it doesn’t work on her.

She does remember a little though. Personally I think they should stand at the border and repeatedly push her over and reel her back (not for memories, just because it would be pretty hilarious). Damon also decides Elena is better without him because she’s found happiness and is now willing to let her go

She goes home and Liam arrives with the file of the woman Elena cured because apparently one of her long term injuries has disappeared. He gets all stompy about her not revealing her super power. She still doesn’t compel him.

After the party Jo and Alaric go to her place and she changes clothes showing off a scar on her stomach from when her brother tried to stab her. No prizes to anyone who guesses she’s Kai’s sister.

She swallows some pills for her stomach wound – and sets to work fixing the key before Kai gets up again. Alas she’s missing a piece and ends up back in Kai’s hands because he has had a long long time to get to know this world and plan everything in advance. Kai then tries to convince us all he’s learned his lesson and is a good guy really. I’d laugh – but this is The Vampire Diaries it’s not like there isn’t a whole cast of people who have done far worse things than Kai and been redeemed – by end of the season he’ll probably be part of Elena’s love triangle

Bonnie apparently decides to send them both back… but it fails because her magic disappears. Yes – she’s done what Jo did, put her magic somewhere safe – her missing teddy bear

In the real world a drunken Damon staggers around until he finds Bonnie’s bear. Behold she’s still alive (y’know she took a treatable stomach wound, she had magic and she was in a dimension where he had ALREADY seen someone return to the dead… assuming she was dead was kind of ridiculous).

Short form of Damon’s complaints: Waaaah someone is actually holding me even slightly accountable for the shit I’ve done. I also hate hate hate Elena’s decisions (all of them. Ever) but equally find Damon’s stalking and pushing revolting. It doesn’t matter why Elena has decided Damon doesn’t get to be in her life any more, it doesn’t matter how awful her decision making, how ridiculous her choices or the convoluted ways she sabotages herself – it’s her choice. Be pissed at her by all means, be furious, hate that she let go of those memories – but stalking and pushing is not ok. Especially when pushing is VALIDATED.

Kai can drain magic with a touch. Bonnie can zap him from a distance. I don’t think draining her magic is the way to deal with this guy. Still Bonnie remains the only character on this show being kind of awesome.

Can we take a moment to gape at how many characters actually care about the Caroline/Stefan thing at even the most ridiculous moments. Is it a desperate attempt to make the audience care? For that matter, so much of this season is spent one on what should be really low priority straight love interests: Jo/Alaric. Liam/Elena/Damon. Caroline/Stefan. Liv/Tyler (I'm going to predict now that Tyler will become a werewolf by murdering someone to protect Liv). Can we at least cut some of them down? Also Luke has showed up this season to be a magical servant to straight people and to provide really unsubtle exposition for his straight sister’s love life. This is literally the entire purpose of his existence (when not fulfilling this, he disappears) which is grossly reductive for the show’s only current LGBT character, follows a nastily pervasive homophobic trope and just adds to the show’s nasty homophobic record.

Matt needs to make up his mind. Either he’s on his friend’s side and is willing to help them kidnap and kill Tripp – which he did. Or he’s furious that they would kill the hunter who is actively hunting and trying to murder them. Saying he’ll help them capture and kill Tripp and then being angry because they kill Tripp is just… bizarre.

Elena needs to compel Liam. This whole conflict is so convoluted and ridiculous it’s unreal