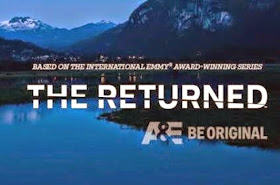 Flashback opener – to 6 years ago. Rowan is a waitress and Simon a much less mopey musician in the bar. And it’s the night before Rowan and Simon get married. Simon also teaches the much younger Lena how to play the drums and Rowena takes a picture

Rowan also tells Simon she’s pregnant – he says he’s happy about it but doesn’t look convincing and when she can’t see him, he cries.

At the wedding he’s a no-show – instead they get the sheriff telling Rowan about his death. Now that’s a pretty awful wedding day.

In the present Rowan is preparing to marry again (to sheriff Thomas who told her about Simon’s death at that), same church, same preacher. They’re all wedding planning when the sheriff is interrupted with news of Lucy’s attack.

We also get a little ominous with Rowan’s daughter Chloe turning on a tap and getting ominous black sludge.

When they’re alone Rowan can talk to the pastor about her misgivings and concerns about the wedding – not that she doesn’t want to be with Tommy, but because she’s still hallucinating Simon and feels too disturbed for it all. That pastor gives great advice which would totally be relevant in a world where the dead hadn’t come back to life.

Meanwhile Camille is realising she actually died and Lena is more than a little freaked out by her back-from-the-dead-and-unaged twin. Especially since their parents are desperately trying to pretend all is normal and that Jack has moved back in for the night. She storms out and Jack tries to stop her (and make sure she doesn’t loudly talk about their resurrected daughter where everyone can hear), grabbing her arm. Lena asks “are you going to hit me again?”

Lena ends up at the bar where Simon is eating and she calls him out on just ditching her on his quest for Rowan. He decides to ditch her again (and walk out on the bill for his meal). Coupled with his general less than fun demeanour means the patrons (Hunter) tell the police about him when they come asking questions about Lucy’s murder. But a drum kit stirs Lena’s memory – she searches the wall collage and finds a picture of young her and an unaged Simon.

Simon keeps stalking Rowan to her library and she talks to him like he’s her hallucination and her inability to let go as the pastor advised. Until the point where she says she can’t let him go and she’s glad to be hallucinating. Simon disappearing when her back is turned and also refusing to say anything really isn’t helping in her whole hallucination theory.

The police take Tony, the bar owner into the station for questioning because 7 years ago he was a suspect in the stabbing of another woman in very similar circumstances – and she was just one of several, notable only because she survived. The female police officer, Nikki Banks, gets very angry while talking about them.

Sheriff Tommy, meanwhile, finds and arrests Simon where they discover he is supposed to have died several years ago. Tommy asks about his connection to Rowan and has Simon locked up (ostensibly for identity theft) while Nikki gives him a very dubious look.

When he goes home that night he looks through Rowan’s photos and finds one of Simon – and sees just how much like Simon the new Simon looks.

Back at the Winship house, Claire discussing with Peter (the psychiatrist) the possibility of her and Jack getting back together (the implication being that it was Camille’s death that drove them apart – or was the straw that broke the camel’s back anyway). Peter advises against it for very sensible, solid reasons (and because he has a thing for Claire). Camille isn’t super happy to see Peter though he is good at putting the most positive spin on things. Camille also has some rather huge survivor’s guilt as the only living kid from the bus.

Camille decides to sneak out when she sees Peter and Claire kissing and Claire finds that Camille has torn up Lena’s room. Claire calls Jack in a panic over losing Camille again – but the jarring smell of Jack’s drinking snaps her out of it. She finds Camille crying outside the bar, upset that Hunter, her one-time crush, no longer even recognises her; everyone has moved on but her.

Julie goes to the police station to try and find out if Victor has been reported missing. For some bizarre reason Julie decides to make up a story about how she saw Victor rather than tell the policeman “hey I have a semi-silent child at home”. While at the police station she has a shocked recognition moment with police woman.

She goes home to talk to Victor and ask why no-one is actually looking for him. No talking but bonus hugs – and she still has a nosy neighbour, Annie, who really needs a hobby or a blunt instrument to the skull. Her gossiping does tell Julie about her suicidal patient who jumped off the dam.

When they go to bed Victor draws creepy pictures of the town falling into a whirlpool while Julie cries before getting into the bath – her scars showing she is the woman who survived the attack Tony was questioned for.

We have the beginning of the ongoing themes that slowly built up so excellently in the French version of this show – ominous water and the Returned constantly eating and not sleeping. I’ll give them points for using the same subtle build up as the original but that, again, is part of the problem that comes from having watched the French one first; I’m looking for the first hints of things that probably should be sneaking up on me.

In some ways I wish I hadn’t watched the original because I think I’d appreciate it a lot more. I’d appreciate Camille’s horror that not only has everyone gone on aging, but they’ve gone on living. This idea that she has disappeared from their lives and they’ve all got up… and moved on. Her sister, her mother, her classmates – about the only one who hasn’t started building a new life is Jack. That has to be jarring for her and add to her not feeling like she belongs in their new lives. And equally there is Simon, reduced to being a ghost in the life of his fiancée. Though I think they need to accelerate some revelations about him so his reluctance to speak makes sense

All of this is good but a nagging voice in the back of my head keeps saying “but that was better”. Which is really hard to get past and appreciate this show for what it is. Especially since it is such a direct copy

I will repeat that this show has increased the racial diversity – not just with Julie but the Pastor as well. Tommy is latino in this show while his original, Thomas, was North African and one of the few poc on the original show.